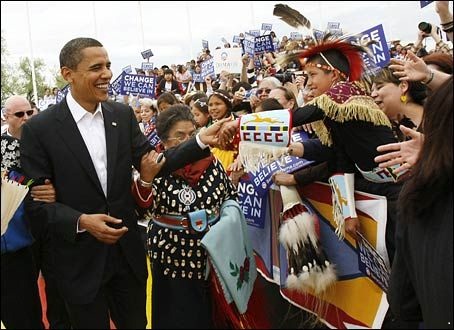 Barack Obama was formally adopted into the Crow Nation today — and given the name “One Who Helps People Throughout the Land.”

I was shocked (although I shouldn’t have been) to learn that he is the first presidential candidate who has ever visited the reservation of the Crow Nation, located in the state of Montana.

In a speech given yesterday, he made strong promises to address historic and present wrongs, and promised to bring improvements in both health care and education to America’s reservations:

The visit was meaningful, said Darrin Old Coyote, a member of the tribe who wore an elaborate headdress. “To have us left out all these years, and then for him to come here, it shows respect, and it makes us optimistic,” Old Coyote said.

The visit also had political value for Obama. The members of the Crow Nation vote as “a close knit bloc,” Old Coyote said. “Now that Senator Obama is part of the family, that is where we will go.”

The Billings Gazette gave some specific details of how Obama intended to address U.S. relationships with the tribes, including his commitment to having a Native American policy advisor on staff and “to holding an annual summit to ensure tribal needs are met.”

Obama talked about understanding what it is like to be viewed as an outsider from mainstream society and to struggle financially.

“I want you to know that I will never forget you,” he said.

But they can elect a president committed to do what’s right for Native Americans.

“And since now I’m a member of the family you know I won’t break my promises to my brothers and sisters.”

I’ve read discussion here and there about native people’s interest in Obama, given that he is from Hawaii. Beyond the powerful symbolism of his candidacy, it seems he has both a genuine concern for marginalized people, and an unerring ability to convey that concern.