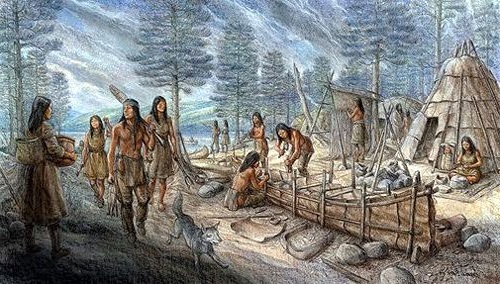 I’ve always acknowledged my Abenaki heritage and for a long time, I’ve wanted to take part in the tribal council and the political process it involves. However, the council in my opinion, is a puppet council.

There is no tribal democracy here. Instead, the chief came to power by nepotism and not a fair vote. Her father was chief and she became chief while he was on his last legs.

My email below is an attempt to shake things up and get the gears of change started.

Note: I originally posted this diary at Daily Kos as well.

Here’s my email in full. There are no actual names of people mentioned as to protect their identities:

Feel free to pass this on to fellow Abenakis who are disenchanted with the current stateof the St.Francis(sic) band of the Abenakis. I urge you to forward it, especially if you know people who are frustrated and wanting to make change.

If I could, I would consider starting or joining a new branch of the Missisquoi Abenaki Nation. My arguments for doing so will probably seem crass and uncalled for to some people. If this is the case, I feel for people who may take offense and their inability to see what is in front of them.

I feel that younger Abenakis such as myself, need to speak out more about the state of the tribe and assert some sort of authority that elders may be unwilling to assert. We are also Americans and even though our country has not always been fair to us, we are still blessed with the ability to change and evolve.

I feel that the current tribe is un-Democratic. We do not have a say in what our “chief” does. For example, I’m still very disappointed that she moved the pow-wow back by a week.I’ve always looked forward to attending pow-wows and I’m not happy that I missed the one this year. However, looking back on the current state of the tribe, I’m actually glad that I missed it. After all, it’s all about her.

Our “chief” is a believer in the cult of personality. She loves to take credit for things that she had nothing to do with. She “elects” sycophants and historians to serve on the tribal council, as opposed to real Abenakis. She complains about the injustices lobbied against her, while ignoring the injustices that have plagued our tribe as a whole.

Tell me, has there ever been a mention of Abenakis without a mention of her in the media? Has the media ever bothered to interview real Abenakis and gather their thoughts on the progress (or lack thereof) of our tribe? Why should her opinion have more weight than the opinion of anyone else in our tribe?

I think I’ve given enough attention to our “chief”. She craves attention because all of the years we have fought for our tribal identity, she has taken the credit for it. No more.

It’s time to turn my attention to our tribe and what we can accomplish if we can get involved.

We are already in the 21st Century and even though our tribe has statewide recognition,we are still lacking in areas that we should have covered long ago.  I personally feel that more should be done to assure that fellow Abenakis have access to education, decent social services and have a sense of pride about their tribe. I know that there are people

working very hard for these things and I fully support what they are doing, despite the state our tribe is in.

No more hiding in the shadows. No more fear of our “chief”. In the words of Franklin Delano Roosevelt, the only thing we have to fear is fear itself.

I have been blessed with the ambition and desire to better myself. I want to use my desire to make things better for others. This is why I share my opinion, as strong as it may be. Our tribe is in danger of disappearing. When I use the word  “disappear”, I am talking about allowing the selfish desires of one woman to reign over the desires of our tribe as a whole.

As history has consistently shown, we live in a country of innovative people who have used their courage and knowledge to make things better for others. We have the ability to do it.

I have been encouraged to apply to the Vermont Commission on Indian Affairs. I am in the process of doing so.

I also have Barack Obama to thank for my inspiration to speak out. There are not enough young Abenaki voices clamoring for change. I aim to rock the boat and create a wave of change.