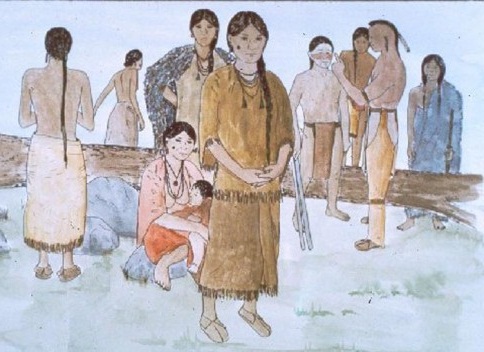 The very first treaty which the United States signed with an Indian nation was with the Lenni Lenape (also known as Delaware) in 1778. The treaty allowed American troops to pass through Delaware territory. In addition, the Lenape agreed to sell corn, meat, horses and other supplies to the United States and to allow their men to enlist in the U.S. army. The treaty also stated that if the Lenape decided to, they might form a state and have a representative in Congress. The idea of statehood for the Delaware was suggested by Chief White Eyes.

What follows below the squiggle is a brief description of the traditional culture of the Lenni Lenape.

Unlike the European nations in the eighteenth century, the Lenni Lenape were not a monarchy nor were they politically unified. Among the Lenni Lenape there was a confederation of towns and villages. Their government was a participatory democracy, with councils presided over by chiefs, known as sachems, whose authority came from their power of persuasion. The political focus of the Lenni Lenape was the village which was generally inhabited by a few hundred people.

The role of the sachem was often that of a mediator and their primary power lay in their ability to persuade other people through their oratorical skills. They had little power over the warriors and merely acted as spokesmen for their people in dealing with the Europeans.

With regard to the succession of Lenni Lenape chiefs, a chief would usually designate his successor, but this does not appear to have been binding following his resignation or death. Unlike the European kings, a son did not automatically assume his father’s position.

The Lenni Lenape language belongs to the large Algonquian language family. It is thus related to other languages in the area, such as Penobscot, Passamaquoddy, Wampanoag, Massachusett, Narragansett, Mohegan, Pequot, Munsee, and Nanticoke. It is distantly related to the Plains Indian Blackfoot, Cheyenne, Arapaho, and Gros Ventre and even more distantly related to some California languages such as Wiyot and Yurok.

Like the other tribes in the Northeastern United States, the Lenni Lenape were an agricultural people who also engaged in some gathering of wild plants, hunting, and fishing. Like the other Indian people in this region, they raised corn (maize), beans, squash, sunflowers, and other crops. The crops were tended by the women and were not planted in fields which were fenced. Thus, Indian agriculture was often invisible to the English who assumed that agriculture was men’s work and had to be done in fenced fields.

With regard to hunting, the Lenni Lenape hunters preferred to hunt when they were hungry. They felt that hunger would continually remind them of why they hunted. According to their oral traditions, hunting on a full stomach would make the hunter careless and lazy, thinking about home, and not watching for game.

The Lenni Lenape made blankets from beaver and raccoon skins that were pliable, warm, and durable. By carefully setting the hair or fur in the same way, rain would run off the blanket and not penetrate it. They also made blankets from feathers which were warm and durable. Turkey and goose feathers would be interwoven together with thread or twine made from wild hemp and nettle.

Tattooing was common. Generally animal figures were favored. Some warriors would have tattoos which represented their war exploits. Writing about one such warrior in 1817, Christian missionary John Heckewelder reported:

“On his whole face, neck, shoulders, arms, thighs and legs, as well as on his breast and back, were represented scenes of the various actions and engagements he had been in; in short, the whole of this history was there deposited, which was well known to those of his nation, and was such that all who heard it thought it could never be surpassed by man.”

The Lenni Lenape kept records of important information in a number of ways. Wampum belts were one way of recording an event. Song sticks and wooden tablets with engraved symbols were used to record the verses of sacred songs and to record family genealogy. One early Moravian missionary reported:

“they use hieroglyphs on wood, trees, and stones, to give caution, information, communicate events, achievements, [and] keep records.”

Like the other Indian nations of the region, the Lenni Lenape used wampum belts for recording important agreements and for sending messages. A wampum belt with one or two rows of white wampum interwoven with black and running through the middle indicated that two nations were friendly with each other. On the other hand, a black belt with the mark of a hatchet on it in red is a war belt. When this type of belt together with a twist of tobacco was sent to an Indian nation, it was an invitation to join in war.

Many of the tribes in this region used a kind of picture writing known as wikhegan. A hunter or traveler would scratch a series of pictures on a piece of bark and then hide it in the base of a tree. By leaving sticks on the trail, others would know that a wikhegan was hidden nearby and recover it to read the message. The wikhegan was also used in regional maps. These bark maps would show the rivers and streams of the country and would allow those who embarked on a long-distance journey to do so without going astray.

Unlike the eighteenth century Europeans, the Lenni Lenape viewed men and women as equals. Marriages were contracts in which it was understood that both sides were not obligated to live with each other any longer than they were pleased with each other. There was no religious ceremony involved in marriage, and the marriage, as well as the divorce, was seen as a private matter rather than a concern for the entire village.

While warfare was common among the Indian nations of the Northeast, it tended to be individualistic. War leaders led by persuasion, rather than authority and rank.  Warfare tended to be small in scale and there were relatively few casualties. War was conducted for revenge and for personal honor. It was not done to obtain territory, and religious war was unthinkable.

Lenni Lenape warriors would often wear a wooden helmet into battle. They would carry a large wooden war club which was attached to one arm with a thong and a rectangular shield made of wood or moose hide. The shield would cover the body up to the shoulder. Both the shield and the war club were painted with special designs. Warriors would often wear special headbands and red turkey feathers. While on the warpath, they would use a special jargon.

As with other American Indian nations, dreams were an important part of the lives of the Lenni Lenape. It was of vital importance that each human being obtain a personal guardian spirit in order to be successful in their lives. A formal vision quest was therefore done at about 12-14 years of age. During the vision quest, the seekers would abstain from food and water. There are some reports that datura (jimsonweed) was sometimes used to enhance the vision experience. Following the vision quest, a new name would be bestowed reflecting the nature of the vision.

The Lenni Lenape also had sacred dolls which were used in the spring in the Doll Dance. This ceremony was a celebration of fertility as well as good health.

One of the ceremonies among the Lenni Lenape was the Big House Ceremony or Gamwing. This twelve-day ceremony helped to maintain the cosmos and included the sharing of dreams and visions. During the ceremony, the participants would tell of the visions received during their vision quests and sing the songs acquired at this time. Dancing around the fire proceeded in a counter-clockwise fashion.

The Big House itself is a symbolic representation of the world with a central column connecting the sky and the earth and the four walls facing the four cardinal directions.

Among the Lenni Lenape, the Pickwelanoekan or Nighthawk Dance was both a dance of thanksgiving and a petition to the spirits for good health. In this dance, from two to four young men face the singer in a line. Each dancer carries a rattle in his right hand and a nighthawk wing fan in his left. During the dance, they lunge and jump toward the singer.

As with Indians in other culture areas, the sweat lodge was, and continues to be, an important element of spirituality. Among the Lenni Lenape, sweat lodges (also called sweat houses and sweat ovens) were large enough to hold from two to six people. The sweat lodges were generally built on a hillside or slope so that half of the lodge was underground. The portion which protruded would be well covered with planks and earth. The sweat lodges were generally located some distance from the village in an area with ample wood and water. Within the lodge, water would be poured on red hot stones to produce steam which facilitated communication with the spirit world. Separate sweat lodges were built for men and women. The sweatlodge served as both a ceremonial and social center.

As among many other tribes, life and death were seen as a part of an ongoing cycle. Thus, reincarnation was seen as a part of this cycle. After a birth, old women would examine the newborn to check for signs that the baby had lived before. These signs included keeping the body relaxed and the hands unclenched and reacting favorably to places and things associated with the dead relative.

“He asserted very strange things, of his own supernatural knowledge, which he had obtained not only at the time of his initiation, but at other times, even before he was born. He said he knew that he had lived through two generations; that he had died twice and was born a third time, to live out the then present race, after which he was to die and never more to come to this country again.”

Among the Lenni Lenape, the body of the deceased was buried in a sitting position and grave goods included tools, food, and wampum. In some instances, a post with a pictorial representation of the individual’s accomplishments might be placed at the grave. As with many other tribes, the Lenni Lenape avoided speaking the name of someone who was deceased.

The Lenni Lenape and the Revolutionary War

Teddy Roosevelt and the Indians