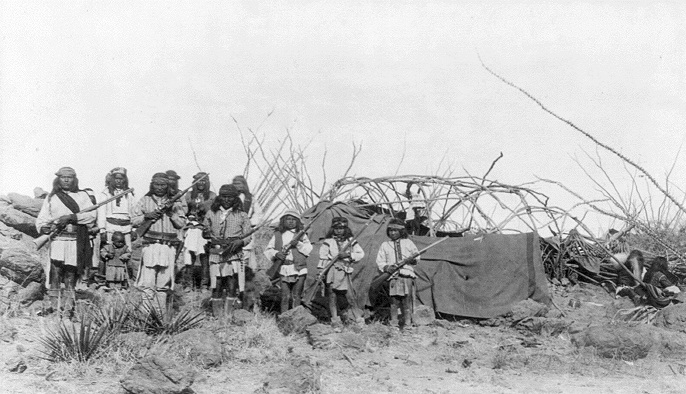 In 1865, some drunken American squatters murdered Pai headman Anasa. In retaliation, Pai raiders attacked several wagon trains, ran off livestock, and shut down the traffic on the road between Prescott and Fort Mohave. In response to these attacks, the U.S. Army created a line of demarcation which declared that all Indians living more than 70 miles east of the Colorado River were to be considered hostile and subject to extermination. Under this declaration, not only were the Pai considered hostile, but also the Yavapai and Western Apache.

In 1866, a small party of Tolkepaya Yavapai encountered an American wagon train near Skull Valley. The Yavapai informed the teamsters that this was their land and that the water, grass, and corn belonged to them. The Yavapai told the teamsters that they would allow the Americans to leave unharmed if they surrendered their mules and the contents of their wagons. From the American perspective this was an act of extortion, and in response a group of 13 soldiers-members of the Arizona Volunteers-arrived with orders from Fort Whipple to “punish” the Yavapai. Then more Yavapai and Tonto Apache arrived, including some who had papers showing that they had permission to be in the area. On the third day of the standoff, about 80 Yavapai and Tonto Apache laid down their bows, and displaying their papers from the government, approached the wagon train peacefully. The soldiers opened fire, killing more than 40.

In 1866, the Arizona Volunteers waged a war of extermination against the Yavapai and killed at least 83.

In 1868, a new army commander arrived at Fort McDowell and immediately ordered a campaign against nearby “Apache”. The army informed the peaceful Yavapai under the leadership of Delshe and Ashcavotil that their soldiers were under orders to shoot any Yavapai who wandered away from the post. When 170 U.S. cavalry rode into the Yavapai camp the next morning, the Yavapai fled into the mountains and the cavalry followed. The army then began arresting as a “prisoner of war” any Yavapai who appeared at a military post, even when they came under a flag of truce. Those who tried to escape were shot. The Yavapai retaliated by killing U.S. mail carriers and running off livestock. In response the U.S. troops and their Pima allies began a campaign against the Yavapai.

In 1868, a party of about 30 Yavapai including the headman Quashackama visited the Indian agent at La Paz. They asked for food but were denied rations. They set up camp and waited for the arrival of the Indian Superintendent. At sunrise the next morning, a group of 13 teamsters rushed into the Yavapai camp with guns blazing. They murdered Quashackama and 14 others. The teamsters were seeking revenge for attacks on their wagon trains, but the residents of La Paz knew that these Yavapai could not have been responsible for the attacks. Quashackama had been a friend to the Americans and had helped them to recover strays and stolen livestock. Army officers and territorial officials arrested the teamsters, but a U.S. district judge who was sympathetic to Indian-killers set the murderers free. The remaining Yavapai fled back to the mountains and some took revenge on American travelers.

In 1870, two Tolkepaya Yavapai men entered the Army’s Camp Date Creek and explained that their people were not hostile but they would like a peace agreement to protect them from military and civilian raiders. Two weeks later a meeting was held with 200 Yavapai under the leadership of Ohatchecama and the Camp Date Creek commanding officer. An informal peace was negotiated. The Yavapai promised to stay off the roads between Prescott and Wickenburg, and to report the presence of Yavapai raiders to U.S. officers. They also agreed to turn in any of their own people responsible for attacks on Americans.

In 1872, the army with 120 U.S. soldiers and 100 Pima scouts tracked a band of Kwevkepaya Yavapai into the Salt River Canyon. With the aid of Nantaje, a Tonto Apache scout who knew the area well, the army located the Yavapai camped in a cave. The army positioned itself below the cave and began firing into the cave. After chanting their death song, 20 Kwevkepaya men charged from the cave. They were quickly gunned down by the Americans. It is estimated that 76 Yavapai were killed in the cave. Eighteen women and children, all of whom were wounded, took cover under the bodies of the dead and survived. The army took the survivors, as prisoners, to Fort Grant.

General Oliver Otis Howard called a peace conference with more than 1,000 Kwevkepaya Yavapai and Apache to quell animosity in the region. The spokesmen for the Yavapai included Pawchine, Sygollah, Wehabesuwa, and Sekwalakawala. All agreed that hostilities should be ended. The Yavapai and the San Carlos Apache promised to help the Americans chase down those who resisted the American invasion.

In 1872, the army called in about 50 Yavapai under the leadership of Ohatchecama to discuss an incident involving a stage coach. The Yavapai left their weapons in camp and came to the meeting unarmed. The Yavapai were innocent of the stage coach incident, but the American general (George Crook) was intent on arresting ten Indians. When the soldiers moved in to make the arrests, the Yavapai resisted, and the soldiers opened fire. Several Yavapai were killed and Ohatchecama and several others were arrested. The remaining Yavapai fled.

Early the next morning, the Yavapai prisoners broke out of the guardhouse. Several were killed and Ohatchecama, with two gunshot wounds and a bayonet stab wound, escaped to the mountains where he died.

Shortly after this incident, Pakota and Takodawa returned from their visit with President Ulysses S. Grant. Upon hearing of the assault, they presented their medals and papers and relayed the President’s promises of peace. Pakota soon found that the pleasant words of accommodation and peace spoken in Washington did not represent reality in Arizona.

In 1872, General George Crook embarked on a war of extermination against the Yavapai. The campaign was carried out by well-armed and well-organized soldiers against scattered bands of malnourished and poorly-armed Yavapai families. The “battles” tended to be one-sided, murderous onslaughts.

The following year, as a part of General George Crook’s war against the Yavapai, soldiers attacked the camp of Yavapai headman Notokel. While Notokel and ten others escaped, eight Yavapai were killed and all of their belongings destroyed. Near Fort McDowell, the soldiers attacked a Kwevkepaya Yavapai camp, killing nine and wounding three. Shortly after this, Notokel, two children, and one woman were shot by the soldiers.

Wipukepa Yavapai headman Tecoomthaya moved his people to the extreme north of their territory in order to escape General George Crook’s campaign against them. However, a force of U.S. soldiers with the aid of Pai scouts tracked them down and attacked them without warming. The Yavapai were not given the option of surrender. While most of the Yavapai escaped, the soldiers burned all of their supplies and food.

Over a period of seven months in 1873, Crook’s soldiers killed more than 250 Indians.

In 1873, General George Crook, like most American officials, preferred to deal with a dictator rather than a democracy and therefore appointed Coquannathacka as head chief for all the Yavapai. Accustomed to a military and political hierarchy, Cook wanted to be able to deal with a single leader, preferably one chosen by him and loyal to the Americans rather than the Yavapai.

Unfortunately for the Americans, while Coquannathacka was a respected elder, he had little interest in cooperating with Crook. In addition, he was not much of a talker. When Coquannathacka declined the position, the Americans appointed Motha (later known as Mojave Charlie or Captain Charlie) as head chief. The Americans gave him an officer’s uniform, complete with a saber and black hat, as a symbol of his status as head chief. While Motha could parade about in his new uniform-which he did daily-he still did not and could not speak for or command the Yavapai people.

In 1874, as a part of his campaign to exterminate the Yavapai, General George Crook offered a reward for the murder of the Yavapai leader Delshe. He told his people to bring back Delshe’s head. Delshe responded to this by slipping into the Rio Verde Reservation and recruiting more followers.

In 1875, the Yavapai were force-marched nearly 200 miles to the San Carlos Apache reservation. This ended the primary military campaign against the Yavapai. However, army troops remained behind to hunt down any remaining Indian camps. A few miles east of Camp Verde, army scouts killed six Wipukepa Yavapai men and captured three women and seven children. Farther south, they killed four Tolkepaya Yavapai men and captured one woman and two children.