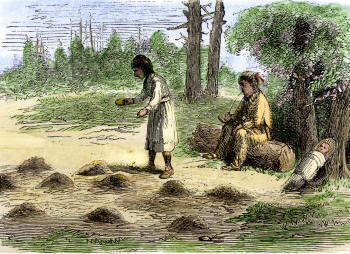 When the Pilgrims first arrived in New England in 1620, they viewed the area as an undeveloped wilderness. One of their first activities was to rob Indian graves, taking from them, among other things, maize (commonly known as corn). While the Pilgrims relied on the produce from Indian farms-corn, beans, and squash-for their survival they failed to either see or understand the well-developed Indian agriculture which they encountered. In the centuries since the Pilgrims began their invasions, historians, politicians, pundits, and others have been unaware of Indian agriculture.

Aboriginal New England agriculture was based on corn, beans, gourds, pumpkins, passionflower, Jerusalem artichoke, tobacco, and squash. Beans of many different colors and textures were used in many different ways and were added to many foods. Corn (maize) was a variety known as northern flint which had eight-rowed, multicolored ears.

Fields were initially cleared by slash-and-burn methods. Fires would be placed around the bases of standing trees which would burn the bark and kill the tree. Later the dead tree would be felled, often knocking down other dead trees as it fell.

Once an area had been cleared, earth mounds or hills were constructed about four or five feet apart. Kernels of corn and beans would then be planted in the mounds. The corn stalks would later be used by the bean vines as a pole. In the spaces between the mounds, the people would plant squash, gourds, and tubers. The squash vines would trail alongside and over the mounds, protecting the roots of the corn plants and preventing weeds from establishing themselves. This type of agriculture did not look orderly to European eyes and thus it was often unseen by them.

In addition, the farming was done by women. Since the English assumed that only men farmed, they didn’t see the farming because it was done by the women. The European invaders assumed that men were inherently more important than women and thus valued only men’s work, or what they perceived as men’s work. In actuality, women contributed as much as three-fourths of the total calories consumed. A single Indian woman, working an acre or two, could raise 25-60 bushels of corn which was enough to provide about half of her family’s caloric needs.

Hoes for preparing the ground and weeding used the shells of horseshoe crabs, clams, the scapulae from deer, or turtle shells. Small huts were often constructed in and around the fields. From these huts, children would watch the fields and scare off any birds which threatened the plants. Among the Narragansett, tamed hawks were also used to frighten the birds away.

In southern New England, planting was timed by the disappearance of the constellation Pleiades from the western horizon and harvesting began with its reappearance in the east. These astronomical observations mark the length of the frost-free season in the area.

In order to keep an accurate measure of the seasons, the people constructed observatories in the form of stone chambers, stone circles, and carefully split boulders which enabled them to view and mark solar events such as solstices. These architectural features, which have often puzzled non-Indians, may have also been used to mark lunar and stellar cycles.

While the aboriginal inhabitants of New England have often been characterized by non-Indians as nomadic hunter-gatherers, they were actually settled agriculturalists. Throughout New England, Indian villages had extensive fields and at least six of the thirteen phases of the lunar calendar were named or described in terms of agricultural schedules. The fields would range from 20 to 200 acres in size.

Over time, agricultural fields lose their fertility. In many areas, the declining fertility would be noticed after 8-10 years, at which time the people would increase fertilization and/or create new fields by burning the woods. After a decade or so, the fields might be abandoned and the people would move a short distance away to establish to new village. This move would be done gradually, often over a period of several years. A few families would move initially and then the others would join them.

Since farming was an important part of the daily life of the people, it should come as no surprise to find that agriculture was also the center of their religious and ceremonial life. Of particular importance was the harvest ceremony (or, better, ceremonies) which involved several days of feasting, dancing, and the giving away of material wealth. Among Native Americans food was seen as communal and was shared freely by all who were in the village.

The Green Corn Ceremony was usually held in August when the first corn ripened. For a period of about two weeks, the community leaders would eat only at night.

The cosmology of the Indian Nations of New England included many different spiritual beings or forces. Unlike the Europeans, they did not rely on one god with multiple personalities, nor did they have a hierarchy of gods and goddesses. The traditional stories tell of forest elves, river elves, fairies, dwarves, and giants. Among the Narragansett, it was an entity called Cautantouwit who sent the first kernels of corn to the people in the ear of a crow and for this reason the Narragansett did not harm crows.