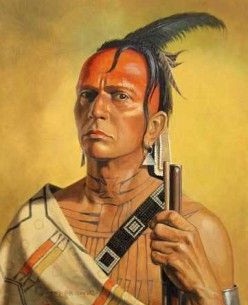 In the world of politics, those who become powerful don’t always have the best interests of their people in their hearts and minds. Sometimes, political leaders are seeking to enhance their own wealth, power, and prestige. One of these leaders was the Cherokee chief Doublehead. Doublehead was one of the most feared men in the Cherokee nation and had killed more people, both Indians and non-Indians, than anyone cared to count. He rose to the position of speaker of the Cherokee council, a position that he won for his ability as a storyteller and as a translator of English messages for the American government.

In 1793, Cherokee warriors Doublehead, Pumpkin Boy, and Bench ambushed two Americans in Kentucky. After scalping them, the Cherokee then stripped the flesh from their bones, roasted it, and ate it.

Later that same year, in Tennessee, a Cherokee war party under the leadership of John Watts attacked the settlement home of Alexander Cavett. The family, three men and ten women and children, barricaded themselves in a blockhouse. Hopelessly outnumbered, they negotiated a truce. However, when Cavett opened the door, Doublehead attacked, killing twelve of the thirteen people in just minutes. While the other warriors begged him to stop, he continued the bloody slaughter with a war ax. The warriors saved only one boy. Major Ridge witnessed the attack and felt that it was not war, but cold-blooded murder. Doublehead claimed that the killings were in revenge for the death of his brother Pumpkin Boy at the hands of Americans earlier that year.

In 1794 a delegation of Cherokee, including Taken Out of Water, Northward, Doublehead, John McLemore, and Arthur Coody, were invited to Philadelphia to reaffirm the Treaty of Holston. Doublehead managed to increase the Cherokee annuity from $1,500 to $5,000.

In 1798, at Tellico, Tennessee the Cherokee signed a new treaty which renewed previous treaties, called for new land cessions, and provided for an additional $1,000 in annuities. Signing the treaty for the Cherokee were Bloody Fellow, Little Turkey, Taken Out of Water, Doublehead, and Tahlonteskee.

In Tennessee in 1805, the Cherokee ceded to the United States the Cumberland Plateau. Under the terms of the treaty, the Cherokee received $17,000 in cash and a promise of $3,000 annually. The Americans got tens of thousands of acres of land, land which had been the Cherokees’ best hunting territory.

Doublehead brokered the treaty. As his reward, the United States gave him a cash bonus and two tracts of land. Doublehead did not keep his involvement with the Americans in this deal a secret: he bragged about it and claimed that he had secured a good deal for his people. Many Cherokees felt that he had betrayed them by giving the Americans this fine hunting territory.

James Vann, a prosperous trader and tavern owner, had opposed the “sale” of the Cumberland Plateau and called Doublehead a traitor for brokering the deal. The exchange quickly became violent as both men drew their knives and attempted to kill the other. Death was prevented only by the bystanders who physically separated the two men. This fight was probably as personal as it was philosophical: Doublehead had married one of Vann’s sisters and beat her to death when she was pregnant. Vann also had a reputation for having a violent temper.

The Americans had an insatiable appetite for Indian land and in 1806, a Cherokee delegation was called to Washington, D.C. where they signed another treaty with the United States. In this treaty, signed by Doublehead, James Vann, Tahlonteskee, John Jolly, and others, the Cherokee gave up more land in Alabama and Tennessee. By secret agreement each of the signing chiefs was given $1,000 and two rifles. In addition, several of the chiefs received private reservation-land within the ceded territory which they could lease to Americans and hold for speculation without further approval by the Cherokee Council.

In 1807, the Cherokee national council declared Doublehead a traitor for selling Cherokee land without council approval. Under Cherokee law this was punishable by death. Major Ridge, James Vann, and Alex Saunders were chosen to carry out the execution.

Doublehead attended the Green Corn Dance at Hiwassee. He had been drinking with Return Meigs, the American Indian agent, and was drunk when the Cherokee war captain Bone Cracker (also known as Bonepolisher) denounced him as a traitor. Like Doublehead, Bone Cracker had been drinking and this probably gave him the courage to confront the notorious chief. He grabbed the bridle on Doublehead’s horse and in response, Doublehead pulled his pistol and shot Bone Cracker at point blank range, killing him. The Indian agent and other Americans watched this incident, amazed that their friend would kill another man as casually as killing a fly and not give it a second thought.

Following the murder, Doublehead, described as “reeling drunk”, went to the Long Hut tavern owned by his friend McIntosh to continue drinking. There he had words with a non-Indian trader, John Rogers. He told Rogers:

“You live among us by our permission. I have never seen you in council or on the war path. Be silent and interfere with me no more.”

Rogers didn’t move, but continued to insult Doublehead. Unknown to Doublehead and the others in the tavern, Rogers had been sent to distract the chief. Doublehead pulled his pistol, intent on killing the man, but the gun misfired. Rogers continued to stand his ground, confusing the chief.

In the confusion of this tense situation, Major Ridge crept along the wall unnoticed by the others and put the barrel of his pistol against Doublehead’s jaw. Then he quickly blew out the candle and fired the pistol. When the lights come back on, Doublehead had been shot in the jaw and Major Ridge was gone. The others in the tavern had not seen the shooting and did not know that Major Ridge had pulled the trigger.

McIntosh, seeing his friend wounded and on the floor, ordered everyone out of the tavern. He then barred the door and pushed Doublehead out through a back window.

Major Ridge, aided by Bone Cracker’s relatives who were seeking vengeance, looked for the wounded Doublehead. McIntosh first hid Doublehead at his house and then, with the aid of a school teacher, hid him in the loft of the schoolhouse.

In the morning, Major Ridge, a skilled hunter and tracker, saw the trail of blood behind the tavern and followed it to the schoolhouse. He kicked in the door and rushed in, followed by Bone Cracker’s relatives. Awakened by the noise, the wounded Doublehead stood up and pulled out his knife. Both Major Ridge and Alex Saunders attempted to shoot him, but their pistols misfired. Doublehead tackled Major Ridge and attempted to stab him as they rolled on the floor. Saunders, who had re-primed his pistol, then managed to shoot Doublehead.

A few days later Doublehead was buried and many Cherokees noted that no one shed a tear. Following Doublehead’s death, Cherokee society seemed to divide into those who shunned the new ways of the Americans and those who promoted these new ways.