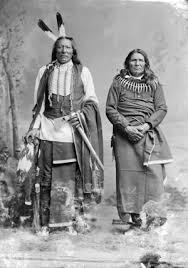 By the beginning of the nineteenth century, Americans were envisioning a country without Indians, and Thomas Jefferson proposed that the Indians be removed and sent west of the Mississippi River. To help bring this vision into fruition, Jefferson had purchased the rights to govern the Louisiana Territory. While he submitted legislation to Congress which called for Indian removal, Congress failed to pass it.

In 1830, however, Congress passed the Indian Removal Act. The Act passed 28 to 19 in the Senate and 102 to 97 in the House. One of the voices of dissent was that of New Jersey’s Senator Theodore Frelingbuysen who pointed out to the Senate that Europeans had found Indians

Another voice of dissent was David Crockett of Tennessee. He said that he could not take land from people who had held it for centuries. His speech would cost him his seat in the House.

In a series of newspaper essays intended to build public support for Indian removal, Baptist missionary Isaac McCoy claimed that Indian tribes were not sovereign nations and that Indians had not really been a party to the treaties in contractual terms. He also defended the Doctrine of Discovery which gives the European nations the ownership of North America. He wrote:

Removal did not happen immediately: it took some time to put the infrastructure in place, to hire private companies to conduct the removals, to negotiate new treaties with the tribes, and to secure title to lands west of the Mississippi from the Indian nations occupying this area. By 1833, the mechanisms were in place and the government was exerting political pressure on the tribes to get them to agree with removal.

In his annual message to Congress, President Andrew Jackson wrote of the Indians that

“They have neither the intelligence, the industry, the moral habits, nor the desire of improvements which are essential to any favorable change in their condition. Established in the midst of another and a superior race, and without appreciating the causes of their inferiority or seeking to control them, they must necessarily yield to the force of circumstances and ere long disappear.”

Jackson, who was not known for his empathy for Indians, felt that having Indian nations in the South posed a major threat to the peace and tranquility of the nation. He favored immediate removal.

“The Indians were a savage race, sunk in the depths of ignorance and heathenism. If they might not be extirpated for their want of religion and just morals, they might be reclaimed from their errors. They were bound to yield to the superior genius of Europe, and in exchanging their wild and debasing habits, for civilization and Christianity they were deemed to gain more than an equivalent for every sacrifice and suffering.”

“As infidels, heathens, and savages, they were not allowed to possess the prerogatives belonging to completely sovereign, independent nations.”

At the time the Indian Removal Act passed, the Cherokee had a higher literacy rate than non-Indians. However, the Cherokee were literate in Cherokee which didn’t count in the minds of the monolingual Americans. The Cherokee, however, were somewhat prosperous and many owned fine plantations, trading posts, and ferries which were coveted by non-Indians.

John Ross led a Cherokee delegation to Washington, D.C, to protest removal. The delegation asked the Secretary of War to enforce the rights secured them by their treaty and to stop the illegal actions of the state of Georgia. President Andrew Jackson offered the Cherokee $3 million to remove. In response, Ross asked the President how he intended to protect the Cherokee in the West if he could not protect their rights in Georgia.

By 1833, the issue of removal had divided the Cherokee. The Treaty Party, which included Major Ridge, Charles Vann, Elias Boudinot, John Walker, Jr., William Hicks, and William Shorey Coodey, supported removal and saw removal as the only way of retaining an independent, sovereign Cherokee Nation. The National Party, led by John Ross, opposed removal.  Ross refused to concede that all hope was lost and insisted that the Cherokee Nation had more power than it realized.

In 1833 Georgia began a lottery to distribute Cherokee lands and homes to non-Indians. While the more educated Cherokee attempted to fight their evictions with lawsuits, most simply packed up and left when the new “owners” appeared. Nearly 1,200 signed up with the federal government to be removed.

When Chief John Ross returned from Washington, D.C. he found strangers living in his home. They were operating his farm and his ferry, and were selling his produce and animals.

Another Cherokee, Joseph Vann, had a large brick home surrounded by 800 acres of planted fields, gardens, and orchards which was claimed by two different Georgia groups who exchanged shots with one another while Vann and his family fled in the winter cold.

In the legal case of Caldwell versus State, the Alabama Supreme Court dismissed Creek law as a “high pretension of savage sovereignty.”

In Mississippi, American settlers began moving into the Chickasaw nation, occupying lands which belonged to the Indians. While the federal government, as a part of its treaty obligations, had promised to prevent trespass, it did not attempt to stop the invasion, nor did it help them find new homes west of the Mississippi.

Being pressured by squatters and the government to relocate, the Chickasaw sent an exploring party to look at lands west of the Mississippi River for potential relocation. Included in the party were Levi Colbert, Pitman Colbert, Henry Love, and William McGilvery.

In Oklahoma, the Chickasaw met with the Choctaw chiefs who had already removed. The Choctaw, however, refused to sell them any land.

In 1833, the United States rounded up the Choctaw in Mississippi for the third removal to Oklahoma. Knowing about the horrors of the first two removals, only 900 Choctaw agreed to remove. Following this, the government declared that no more Choctaw were to be removed.

About 14,000 Choctaw are removed from Mississippi in the three waves and 2,500 die during the trek to Oklahoma. About 6,000 remain in Mississippi. The Choctaw who chose to remain in their homelands were to receive allotments. However, they were discouraged from applying for the allotments and in some cases their allotment applications were simply thrown away by the Indian agent. Only 143 received allotments and almost all lost their lands in a very short time.

The Potawatomi signed the Treaty of Chicago in 1833 in which they gave up their homeland and began a migration westward. The Treaty, negotiated by Potawatomi mixed bloods Billy Caldwell and Alexander Robinson, promised them five million acres in Missouri, covered debts to traders, and provided annuities for 20 years. However, Leopold Pokagon emphatically opposed giving up more land. Pokagon was successful in negotiating an amendment which allowed his band to remain in Michigan. In the negotiations he emphasized that he and his people were Catholics and this helped secure the amendment.