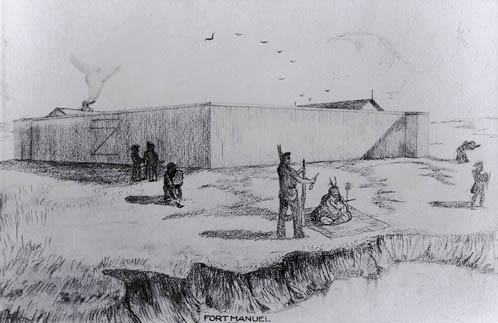 When the Corps of Discovery under the leadership of Meriwether Lewis and William Clark returned to St. Louis after their journey to the Pacific Ocean in 1807, they brought back reports of the rich beaver country at the headwaters of the Missouri River. As a result, the Upper Missouri in Montana became one of the most sought after prizes of the fur trade. In St. Louis, 12 separate companies were formed to exploit this newfound source of wealth.

One of the first fur traders to enter into the upper Missouri River area of what is now Montana was Manuel Lisa, a Louisiana Spaniard by birth. Lisa established a fort at the confluence of the Bighorn and Yellowstone Rivers. The venture was under the auspices of the Missouri Fur Trading Company of St. Louis and included four men who had been with Lewis and Clark. The expedition had a total of 42 men, including 37 French Canadians.

The trading post was named Fort Raymond by Lisa, but most people called it Fort Manuel. Some historians claim that the log cabin, consisting of two rooms and a loft, was the first permanent building in what would become the state of Montana. This claim, however, either ignores or is unaware of the permanent structures which had been built centuries earlier by Indian peoples.

Fort Manual was unusual it that it had coal for fuel. This was a luxury which was rare in the upper Missouri area.

Fur trading companies at this time would establish a trading post at a location convenient for several tribes, then have the Indians come to them bringing in the furs to trade. The new fort was located in Crow country. However, the Yellowstone Valley at this time was also used by the Sioux, Cheyenne, and Blackfoot hunting parties. This meant that the new trading post was also positioned to trade with these Indian nations as well as the Crow.

Lisa departed from the usual practice of waiting for Indians to bring in furs to trade by sending out his own trappers. He ignored any possible concerns that Indians might have about taking their animal resources.

In 1807, John Colter, one of Manuel Lisa’s employees, set out from Fort Manuel to make trade alliances with the Absaroka (Crow). He found the Crow to be friendly and travelled with them into the area that is now known as Yellowstone National Park. When he later reported about the geysers and other sights that he had seen, many non-Indians did not believe him.

In 1808, John Colter set out from Fort Manuel (now also known as Lisa’s Fort and Fort Ramon) on the Yellowstone River, crossed the Bozeman Pass and encountered a Flathead buffalo hunting party. He convinced them to return with him to the fort to establish trade relations. Near Bozeman Pass they were attacked by a large Blackfoot war party. Colter was wounded in the thigh. As the Flathead were about to be defeated, the Crow entered the battle and the Blackfoot were driven off. As a result of this battle, the Blackfoot considered the fur traders to be allies of their enemies and treated them accordingly. As a result, the Blackfoot attacked the fur trading and fur trapping parties.

The following year, John Colter was trapping when he was discovered by a Blackfoot party. From the Blackfoot perspective, he was not only trespassing on their hunting grounds, but he was also stealing their resources. Colter is captured. Instead of killing him, they strip him naked, and tell him to run for his life. This was a traditional punishment for people who were banished. Colter managed to escape and his story became legendary.