Following their removal in 1839 to what would later become Oklahoma, the Cherokee Nation was divided into two basic factions: the Treaty Party made up of those who had moved from their homelands in the American southeast voluntarily, and the National Party made up of those who had been forced to endure the Trail of Tears. With the formation of a new national government, John Ross, the leader of the National Party, had become Principal Chief. In the period of 1845 to 1849 the animosities between the two factions continued to be violent. 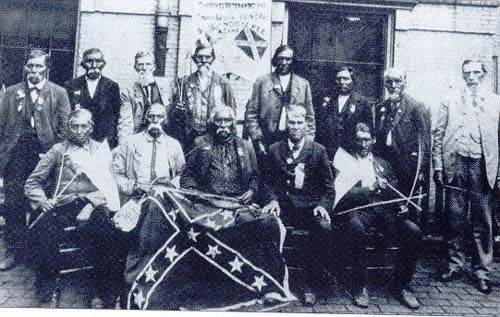 In 18454, Tom Starr, Ellis Starr, Washington Starr, Suel Rider, and Ellis West, all members of the Treaty Party, invaded the home of R.J. Meigs, the son-in-law of John Ross. The invaders attempted to kill Meigs, but he escaped. They then looted and burned the house. Jane Meigs, the daughter of John Ross, was not home at the time, so the invaders threatened her slaves in an attempt to find out where she was. Before they left, they killed two other Cherokee full bloods who had witnessed the event.

Following the burning of the Meigs’ home the Cherokee Light Horse, described as a posse of concerned citizens, went to the home of James Starr where they killed him and wounded his two sons (Ellis and Washington). They then rode to the home of Suel Rider and killed him.

The Treaty Party responded in kind and 35 people were killed. Many Treaty Party members and their families fled from Cherokee territory.

Without ascertaining the facts, and nurturing a grudge against John Ross, the United States army ordered the Cherokee Light Horse disbanded and sent in a company of dragoons. The Cherokee Nation, as a sovereign entity, resented the attempts by the United States to invade its territory and to interfere with Cherokee domestic affairs.

A number of Cherokee who were a part of the Old Settlers (those who had removed prior to the 1830 Indian Removal Act) and Treaty Party factions decided that they could no longer live under a government dominated by John Ross. They left the Cherokee nation and settled in the small Cherokee town of Mount Clover, Mexico. Among those who leave are Joseph M. Lynch, J. L. Thompson, John Gunter, Charles Reece, John Harnage, Ezekiel Starr, and Tessee Guess (the son of Sequoyah),

In 1846, a group of Cherokee Old Settlers from Oklahoma asked President James Polk to divide the Cherokee nation, claiming that the Cherokees were unable live in peace. Polk agreed and sent a bill establishing two Cherokee nations to Congress. Cherokee principal chief John Ross disagreed with the action and expressed a willingness to compromise in order to preserve Cherokee unity. The bill failed to pass.

In 1849, John Rollin Ridge, the son of John Ridge, killed Cherokee Judge David Kell in a dispute over his father’s estate. Kell was a part of the John Ross faction that was responsible for killing John Ridge. Fearing that he would be unable get a fair trial in Cherokee country because of John Ross, Ridge fled to Missouri to avoid arrest. Ridge contended that he had killed Kell in self defense. As a result of this affair, John Rollin Ridge left his old life as a Cherokee behind and joined the thousands who went to California seeking their fortunes in the gold fields. In California, he gained fame as a writer and poet.