While it is not uncommon for some textbooks to give the impression that the California Native Americans passively accepted the missions, Spanish domination, and conversion to Christianity, this was not the case. In fact, the initial reception of the Franciscans by the California Indians was anything but hospitable. Resistance to the Spanish Franciscans was organized by village chiefs and influential shamans and this resistance was expressed through attacks on both the Spanish soldiers and the Franciscan missionaries. During the first years of the Franciscan mission program the overt hostility of the Indians slowed the rate of the establishment of the new missions and created a reliance on soldiers to protect the Franciscans. 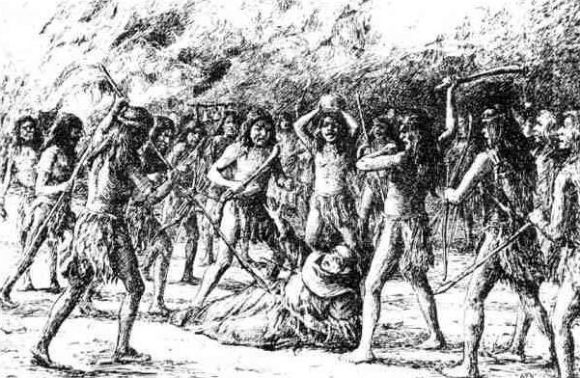 By Spanish law the process of converting Indians into Christians was to take ten years and was to involve four stages: (1) misión (mission) which was to include initial contact and the explanation of the importance of God and the King, (2) reducción (reduction) which was to reduce the Indians’ territory by bringing them into a segregated community centered around a church, (3) doctrina (doctrine) in which the Indians would receive instructions on the finer points of Christianity, and (4) curato (curacy) in which the Indians would become tax-paying citizens.

In 1771, Spanish Franciscans founded the San Gabriel Mission in the Los Angeles basin. The new mission was given the name La Misión del Santo Príncipe El Arcángel, San Gabriel de Los Temblores. Shortly after the mission was established, it was attacked by Indians. The two attacks were triggered by the rape of a Kumi.vit woman by the soldiers who were assigned to protect the Franciscans. One chief was killed and the Spanish soldiers placed his head on a pole as an example to other Indians who might wish to rebel against Spanish authority.

In 1769, the Spanish Franciscans established La Misión San Diego de Alcalá in the homeland of the Kumeyaay Indians. In 1775, the Kumeyaay revolted, burned the mission and killed one of the priests.

Fearing reprisals from the nearby Spanish presidio, the attackers quickly fled into the interior, taking with them some booty in the form of clothing, trinkets, and religious icons. Spanish troops were called out to capture the ringleaders.

The Spanish priests blamed Satan for the uprising against the San Diego Mission. Father Francisco Palóu wrote:  “The enemy, [Satan] envious and resentful, no doubt because the heathen in that territory were being taken away from him, and because the missionaries, with their fervent zeal and apostolic labors, were steadily lessening his following, and little by little banishing heathenism from the neighborhood of the port of San Diego, found a means to put a stop to these spiritual conquests.”

From an Indian perspective, the rebellion against the oppression of the Spanish mission was the result of forced labor and the rape of several Kumeyaay women. The Indians viewed the Spanish priests as shamans and held them responsible for the disease and misfortune which was befalling them. Thus, the killing of the priest—an evil shaman in the eyes of the Indians—and the removal of sacred objects from the mission was a way of cleansing the land of the spiritual evil that was growing on it.

Spanish investigation revealed that at least fifteen villages took part in the rebellion, including several so-called Christian villages. Leaders of the insurrection were identified as Oroche of Macate, Francisco of Cullamac, Rafael of Janat, and Ysquitil of Abusquel.

In 1776, the Spanish Franciscans selected a number of Ohlone and Costanoan Indians to be flogged and threatened with execution. The action was intended to stop any resistance to their missionary activities.

In that same year, Indians attacked the San Luis Obispo Mission and set fire to the roofs of the buildings.

In 1785, Toypurina (Gabrielino) convinced Indians from six villages to participate in a revolt against the San Gabriel Mission. Toypurina was a medicine woman who was considered to have supernatural powers. At the attack on the Mission, she killed people with her magic, but the priests and soldiers had been warned and the insurgents were arrested. At her trial, Toypurina denounced the Spanish for trespassing on and destroying Indian lands. Another Indian leader, Nicolas Jose, spoke out against the Spanish prohibition of traditional Indian ceremonies. Most of the Indians were sentenced to 20 lashes and Toypurina was deported to the San Carlos Mission. The public flogging of the Indians involved in this revolt was a ritual designed to restore Spanish domination, a common practice throughout Spanish America.

In 1811, Nazario, a Mission Indian cook at the San Diego Mission, was subject to 124 lashes. He then poisoned one of the priests. Since the Indians often viewed the Franciscan missionaries as powerful shamans or witches, it was appropriate in Indian culture to poison them as this was the traditional Indian way of dealing with such people.

In 1812, a group of Indian converts at the Santa Cruz mission murdered a Franciscan missionary because of his plans to punish Indians with a cat-o’-nine-tails with barbed metal on the ends of the leather straps.

In 1824 the Chumash at the La Purísima Mission revolted against the ill treatment and forced labor imposed by the priests and soldiers. The revolt was sparked by the routine beating of an Indian at the Santa Ynez mission.

A force of 2,000 Indians captured La Purísima and were soon bolstered by Indians from Santa Ynez and San Fernando. For more than a month, the Indians who occupied the La Purísima and Santa Ynez missions were able to resist Spanish military attempts to restore order.

The news of the revolt soon reached Santa Barbara and the Indians attacked the soldiers, sacked the mission, and then retreated to the back country.

The Spanish recaptured the missions after four months. The four leaders of the revolt – Mariano, Pacomio, Benito, and Bernarde – were sentenced to 10 years of chain-gang labor.

Another factor in the revolt was the appearance of a twin-tailed comet in the night sky. According to traditional Chumash beliefs, such a sign foretells of great changes which are about to happen.

In 1828, Mission Indians, under the leadership of Yokuts chiefs Estanislao (Stanislaus) and Cipriano, revolted against the Mexicans in the San Joaquin Valley. Among those joining the revolt were refugees from the Santa Cruz, San José, and San Juan Bautista Missions. Estanislao established a fortified village which was ringed with deep trenches. The Indians were successful in repelling three counterattacks by the Mexican army.

Estanislao secretly returned to the Mission San José and asked the priest for a pardon. The priest agreed that he could return to the mission if he promised never to raid again.

In 1830, Christian Indians under the leadership of Francisco Jímenez, the Indian alcalde of the Mission San José, attempted to capture some Indians who had run away from the mission and were living with the Ochejamne Miwok. The Miwok repelled the invaders. Jímenez then recruited the aid of some American trappers, including Kit Carson, who fought the Miwok for an entire day, killing many Indians, and burning the village. They took some captives back to the mission.

Later the Sierra Miwok captured about 60 horses from the American trappers. Kit Carson and others chased the Miwok for over 100 miles into the Sierras. They attacked the Miwok camp, killing eight and taking three children captive. They recaptured most of their horses.

In 1833, American fur trappers found a village of Spanish-speaking Chumash living near Walker Pass. This group of Indians were renegades who fled from the Spanish missions during the 1824 revolt. They were raising corn and had horses.

In 1834, the Mexican government secularized the California missions. Mission properties were sold or were given to soldiers who had fought against Spain in the revolution.