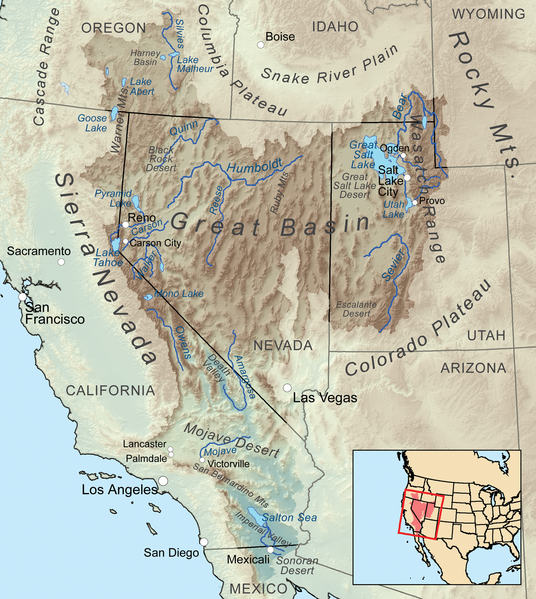 The Great Basin includes the high desert regions between the Sierra Nevada and the Rocky Mountains. It is bounded on the north by the Columbia Plateau and on the south by the Colorado Plateau. It includes all of the present-day states of Nevada and Utah, and portions of Colorado, Idaho, Wyoming, Arizona, New Mexico, and California. This is an area which is characterized by low rainfall and extremes of temperature. The summers in this desert area can be hot, while the winters can be bitterly cold. While it is a physical region that does not seem hospitable to human habitation, Indian people have lived in the Great Basin for thousands of years.

The Numic languages appear to have divided into three sub-branches—Western, Central, and Southern—about 2,000 years ago. About a thousand years ago, the Numic-speaking people expanded northward and eastward.

The Ute tribal territory included much of present-day Colorado and Utah. Much of this territory lies within the Colorado Plateau, a geological anomaly characterized by sedimentary rocks that have been lifted to an elevation of more than 6,000 feet. This is a semi-arid region.

While the groups which are considered Ute shared a common language as well as other cultural features, they were never a single politically unified tribe. There was never a single tribal council or anything close to a supreme chief. Each of the groups, generally called “bands,” was politically autonomous. Membership in the bands was fluid and there was high mobility between the bands. The Ute bands include:

(1) the Weminuche (Weeminuche) or Ute Mountain Ute whose homeland is the San Juan drainage of the Colorado River.

(2) the Tabeguache (also known as Uncompahgre).

(4) the Yampa whose homeland is in northwestern Colorado.

(5) the Uintah whose homeland ran from Utah Lake east through the Uinta Basin.

(6) the Muache (Moache) whose homeland ranged south along the Sangre de Cristos as far south as Taos, New Mexico.

(7) the Capote of the San Luis Valley and the upper Rio Grande.

(8) the Sheberetch in the area of present-day Moab, Utah.

(9) the Sanpits (San Pitch) in the Sanpete Valley in central Utah.

(10) the Timanogots near Utah Lake.

(11) Pahvant who lived in the deserts surrounding Sevier Lake, Utah.

After marriage, the couple would usually live with the wife’s band (matrilocal residence in anthropological terminology). This means that the bands were usually composed of several nuclear families which were related to each other through the female line.

The area occupied by the Ute was buffalo country and so buffalo, as well as mountain sheep, mule deer, whitetail deer, elk, antelope, moose, and rabbits, were utilized for their subsistence. The people also gathered a wide variety of different wild plants.

In hunting herd animals, the Ute often used drives in which the animals were driven into narrow areas where they could be more easily harvested. The Weminuche band hunted deer with poison arrows.

The Shoshone (also spelled Shoshoni) take their name from the Shoshone word sosoni’ which refers to a type of high-growing grass. Some of the Plains tribes referred to the Shoshone as “Grass House People” which referred to the conically-shaped houses made from the native grasses. They were also referred to as the “Snakes” or “Snake People” by some Plains groups. This term comes from the sign which the people used for themselves in hand sign languages. The sign actually represents the salmon to the Shoshone, but among the Great Plains tribes, who were unfamiliar with the salmon, it was misinterpreted as meaning “snake.”

The Shoshone are often divided into four general groups:

(2) Northern Shoshone who lived in southern Idaho and adopted the horse culture after 1800.

(3) Eastern Shoshone of Wyoming who adopted many of the traits of Plains Indian culture.

(4) Southern Shoshone who live in the Death Valley area on the extreme southern edge of the Great Basin.

Among the Western Shoshone, the most important game animals were antelope and bighorn. In hunting antelope, the animals would be driven along a V-shaped runway into a corral which had been constructed of brush, stones, and poles. A medicine person who had the power to capture antelopes’ souls through dreams, songs, and rituals, would aid the hunt by drawing the animals’ souls, and thus the animals themselves, into the corral.

The Bannock, who call themselves Bana’kwut (“Water People”), were called Buffalo Eaters and Honey Eaters by other tribes. The Shoshone referred to them with the term “pannaitti.” Brigham Madsen, in his book The Bannock of Idaho, reports that the Bannock

“migrated from the desert areas of southeastern Oregon to the more propitious and well-watered region found at the confluence of the Portneuf and Blackfoot streams with the Snake River.”

In the Snake and Lemhi River valleys and in the Bridger Basin, the Bannock came into close contact with the Shoshone and the two groups often intermarried. Today, the term “Sho-Ban” is often used to refer to the two tribes. Culturally, the two groups shared a common heritage and a similar worldview. They also spoke closely related languages. With intermarriage, many became bilingual.

The traditional homeland of the Goshute was south and west of Great Salt Lake. They lived in the Toole, Rush, and Skull valleys. There are many who feel that the Goshute are linguistically and culturally Shoshone. The Goshute bands include Cedar Valley, Deep Creek, Rush Valley, Skull Valley, Toole Valley, and Trout Creek.

Historically these people have been designated as Go-Sha-Utes, Goshee Utes, Goshoots, Go-shutes, Gosh Yuta, Go-ship Utes, and Goships. The term “Goshute” seems to come from the Shoshone term “kusippih” which has a meaning of “dry earth,” probably in reference to the marginal land which they inhabited.

There are fifteen Southern Paiute bands: Chemehuevi, Las Vegas, Moapa, Paranigat, Panaca, Shivwits, St. George, Gunlock, Cedar, Beaver, Panguitch, Uinkaret, Kaibab, Kaiparowits, and San Juan. In the northern part of the Great Basin, the bands tended to call themselves after a particular food source: “salmon eaters,” “mountain sheep eaters,” and so on. In the south, the band names tended to be geographical.