When the Spanish invaded Mexico, they found that one of the dominant empires was that of the Aztecs. While many great civilizations and empires had developed and collapses in the region over the millennia, today we know more about the Aztec society than we do about the earlier societies thanks to the observations of the Spanish. In 1519, when the Spanish first encountered the Aztecs, the Aztec empire was a complex state ruled by an emperor from the city of Tenochtitlán which had a population of about 350,000.

The “big house” (calpolli; also  spelled calpulli) was the basic unit of Aztec social organization and of the Aztec empire. The “big house” was primarily a group of families who had been related by kinship or proximity over a fairly long period of time. This group was a land-holding corporation with ritual functions: in other words, the group owned its own land and worshipped its own gods. Like Aztec society, the “big house” was stratified with both elite members and commoners. The elite would provide the commoners with arable land or with non-agricultural occupations and the commoners pay tribute to the elite in various forms.

Within the Aztec capital city of Tenochtitlán there were 80 “big houses” which were arranged into the four great quarters of the city. 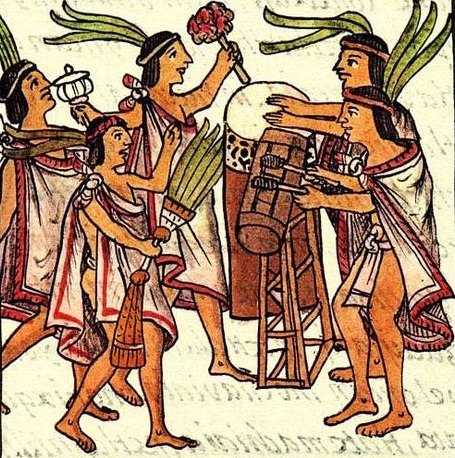 Aztec society was stratified into a number of classes. At the very top of Aztec society were the rulers (teteuhctin) of the cities and towns. Living in palaces and wearing distinctive clothing, the rulers ensured that tribute payments were made at all of the appropriate levels of the imperial administration.

Just below the rulers were the nobles (pipiltin) which was a hereditary class (i.e. people had to be born into it). All of the Aztec imperial ministers belonged to this class. There was also a noble class known as the eagle nobles (cuauhpipiltin) who had been born as commoners but had distinguished themselves in battle and had been rewarded with a noble title.

Most of the people in Aztec society were commoners (macehualtin) who worked the lands of the “big houses” and paid tribute to the upper classes. The Aztec state maintained control over the commoners and tribute was in the form of service: labor on public works and/or as soldiers in the army.

At the bottom of Aztec society were the serfs (mayeque) who worked on the noble estates. Serfs were menial laborers and, according to some reports, were not allowed to leave the lands to which they were attached. Some scholars have estimated that perhaps as many as 30% of the Aztecs were serfs. About one-third of the produce of the serfs went to the nobles.

Aztec society, like other societies throughout the world, included slaves. Slavery was partially debt slavery which was made up of people who could not pay their debts, particularly gambling debts. When deeply in debt individuals could pawn themselves, their spouses, or their children for a certain period of time or perpetuity. Under Aztec law, slaves could not be sold without their consent. In general, slaves seem to have been treated well. Slaves could choose their marriage partners and their children were not slaves.

In addition to debt slavery, the Aztecs also captured people from other nations who were sold in slavery. By the time of the Spanish invasion, the buying and selling of slaves was a big business. Archaeologist Brian Fagan, in his book The Aztecs, writes:  “The ever-increasing nobility required en more laborers to serve in their households. Slave merchants operated from as far away as the Tabasco region of the Gulf Coast and frequented human markets in Azcapotzalco and Itzocan.”

There is also one small, but very powerful, Aztec group which must be mentioned: the long-distance merchants (pochteca). They were treated like royalty and reported directly to the royal palace. These merchants travelled hundreds of miles into foreign territories and were able to obtain luxury goods such as quetzal feathers and amber for the emperor. Membership in this merchant class was hereditary. While the long-distance merchants could become very wealthy, there were restrictions on them flaunting their wealth.

Being a long-distance merchant was a dangerous job and many died while travelling. Disease, accidents, and being killed by unfriendly people were among the job hazards. To ensure their safety and wellbeing, the pochteca had their own gods, including Yacatecuhtili (“Nose Lord”) who is generally portrayed as having a very long nose and carrying a traveler’s staff in one hand and a woven fan in the other. If one of these merchants died when travelling then, like the soul of a fallen warrior, the soul would go directly to the paradise of the Sun God.

Closely associated with the pochteca was another specialized group known as the oztomeca who dressed in local clothing and spoke the local language. Their job, in addition to obtaining exotic goods, was to gather military intelligence. Archaeologists Michael Coe and Rex Koontz, in their book Mexico, write:  “Like the businessmen-spies of modern days, the oztomeca were often a vanguard for the Aztec takeover of another nation, acting sometimes as agents-provocateurs.”

In 1521, the Spanish and their Native American allies captured the Aztec capital of Tenochtitlán, killing about 280,000 of its residents. Aztec society was then forced to be assimilated in the Spanish empire.