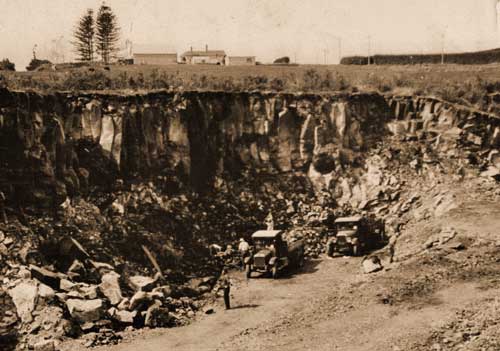 One of the common ways of making stone tools throughout the world is by breaking and flaking: a process commonly called flintknapping. Tools made by flintknapping included points (both spearpoints and later arrowpoints), knives, scrapers, and other cutting implements. The process of breaking stone to form tools is not a random process: it is not simply a matter of banging two stones together. The toolmaker will take a piece of stone and shape it into a culturally acceptable form. Thus, in a culture the same basic tool shapes appear over and over again.

One important thing to understand about stone tools is that not all stone can be used in tool-making. In flintknapping, Indian people needed stones that would break in a predictable fashion and would provide a sharp edge. Albert Goodyear, in his research monograph A Hypothesis for the Use of Cryptochrystalline Raw Materials Among Paleo-Indian Groups of North America, reports:  “It is a general geological fact in most places of North America and probably throughout the world that lithic raw materials of even minimal suitability for flaking do not occur evenly over the earth’s surface. In fact, some environments such as coastal plains and alluvial valleys have no lithic raw materials whatsoever.”

Areas in which there were good stones for making stone tools were important to ancient Indian peoples. They would not only return to these sites regularly to obtain tool-making material, but they would also trade this material to other bands. Archaeologist Douglas MacDonald, in his book Montana Before History: 11,000 Years of Hunter-Gatherers in the Rockies and Plains, writes:  “At quarry locations, hunter-gatherers would often shape the stone into the rough form, or preform, of a tool. By producing preforms at quarries, they reduced the amount of stone they had to carry with them when they left the quarry

Obsidian, a natural glass produced by volcanic action, was a valued natural resource for many tribes. In some places it is found in massive flows but is difficult to extract. An active trade in obsidian was going on for several millennia prior to the European invasion. The obsidian used by the Indians at the Hogback Homestead site (24GN13) near present-day Philipsburg, Montana came from the Centennial Mountains in Idaho and from the Teton Pass in Wyoming.

Briefly described below are some of the quarry sites in Montana.

Otter Creek: By about 8500 BCE, small bands of about 25 people began to inhabit the Otter Creek area in the southeastern portion of the state. The people existed on a diversified diet of local vegetation and wild game. They camped along canyon rims, on the tops of buttes, and along drainages. One of the reasons for the occupation of this area was porcellanite, a native stone created when burning coal seams bake the surrounding dirt into rock. The porcellanite is easily knapped and was used by the people for tools such as arrowheads, scrapers and lance points.

Big Springs: By about 5000 BCE, Indian people were using the quartzite quarry at the Big Springs site (24CB77) in the Big Pryor Mountains. They were using side-notched projectile points similar to those found at Mummy Cave, Wyoming. The quarry was heavily used and Indian people were digging mining pits 3 to 4 feet deep and about 5 feet in diameter.

The quartzite at Big Springs occurs in large nodules. Archaeologist Kent Good, in his M.A. Thesis at the University of Montana, reports:  “Probably a combination of heat and water were used to crack the nodules so as to expose the inner material. Abundant wood and water available at the site would have enabled peoples to use this process.”

Once the inner material is obtained, hammerstones and/or batons are used to manufacture blanks from which blades can be struck. Archaeologist Kent Good also reports:  “While utilizing the quarry material to blank out preforms, the people may have carried on daily activities such as hide preparation and hunting.”

Bowman Creek: By about 1000 BCE, the Kootenai were quarrying chert for making stone tools about 3 miles upstream on Bowman Creek from its confluence with the North Fork of the Flathead River.