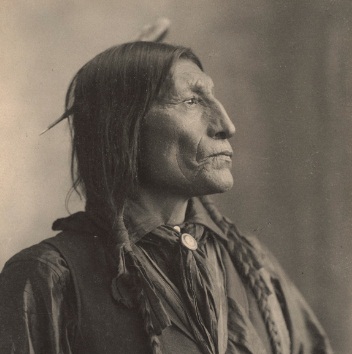 I was a believer in Native American ways from the time I was 6 years old, growing up in Germany, when I first read about Native American culture, via an author – Karl May – a German who had never even been to the United States, but who wrote books honoring Native Americans, against all popular “Indians/Savage” popular identification at that time.

No – he was not informed, he could not have been, he only once visited the continent – after having written his three novels – about the people he wrote about.  But he seemed to have had a dream/vision from abroad, a dream that the people being conquered overseas were being misjudged, under appreciated, and completely misunderstood.  He wrote his novels of Winnetou and Shatterhand on pure instinct, totally countering his current time’s “savage” and “inferior” common belief about American Indians.

I don’t know where his novels came from, but I believe that dreams and visions had a part in them.

In any case, I got a hold of his writings/visions of the people overseas, and it totally hooked my heart from then on, and the rest of my life really is based on it.

I was an abused child in a small farming town in Bavaria.  I found my joy and motherhood amongst meadows, creeks, fields and forests that surrounded my small farming town in Bavaria.  I was unsupervised, lacking supervision and family guidance. But i lived in a safe environment, where I could freely roam for miles in our rolling hills countryside, where wheat fields, brooks, streams, meadows, were still accessible to all of us without fences.  No farmer worried about someone walking on the paths between fields without fences to get to a place like a lake in the woods, a brook in a meadow, etc.

I was 5 years old, living in a small farming town in Bavaria.  My mother, a survivor of World War II, scarred on her scalp from Russian bullets, living on potatoes stolen from farmer’s fields, trying to keep my grandma (her mother) and my aunt Krista, her younger sister – alive during the war.  My grandpa had been called to war as a soldier with the German Army.  While he was off fighting in the Nazi Army, my grandma had another child, which died a few weeks after birth as its digestive system was all screwed up and no medical help was available.
It was my mom – the eldest, who took care of our family (I wasn’t born then yet), during this time and the Berlin Bombings by the allies.

My mom described to me some of the scenes she lived through during that time:

I used to go out and steal potatoes from the farmers to keep us alive. We were all starving.  Then, when the
overhead allied bombings by the British and the Americans on Berlin began, we had to stop even those food raids.”
“When Berlin got bombed by the allies, we all tried to find refuge in the cellars (in Europe, cellars below the buildings were a given).  When the bombs hit the city, the water mains broke, the water poured into these cellars, and the heat of the bombs caused the waters in the cellars to heat up, eventually boiling the refugees to death.”

My grandfather, grandmother, mother, and aunt, had been NO participants in the Jewish persecution of this massacre – no more than we all stand by – unbelievingly – in what’s happening right now.  It just CAN’T be real.

I want to get to the journey that brought me to the US, but I need to call this one PART ONE of more to come.  It’s late night.  I’m tired, but I’m happy I got this many words out tonight.  It’s been heavy and hopeful in my heart.  I hope you all can hear me.
This whole story is really about how I came to love, appreciate, and work for Native American rights for all of my life.

And yes, I’m a Wasichu, but I’ve always skipped the fat.  Is there another word for a Wasichu who doesn’t like or take the fat?