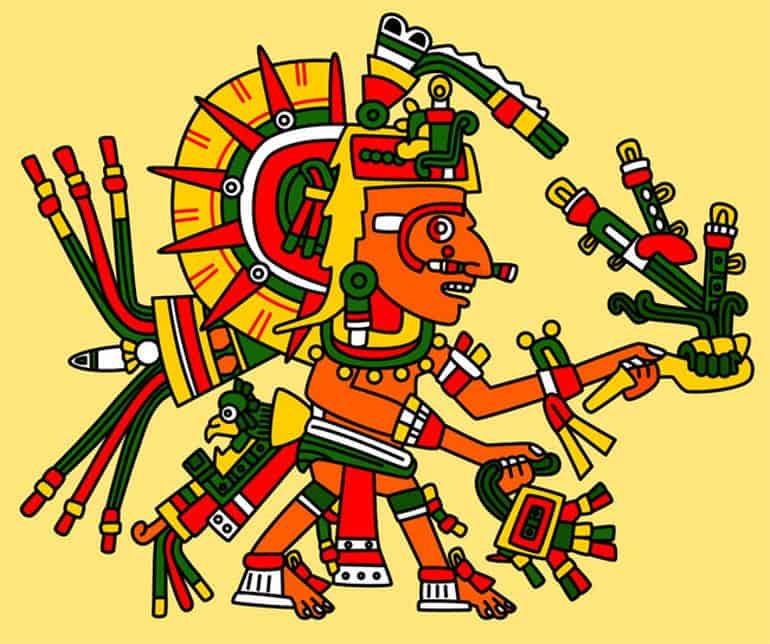 For the general public, the Aztecs (also known as the Mexica) are probably the best-known ancient American civilization. Like the Christians who later conquered much of the Americas, the Aztecs established their empire through religiously inspired military conquest.

The religion of the Aztecs, likes those of the ancient Greeks, Romans, and Egyptians, was polytheistic: that is, many different gods were worshiped. In comparing the Aztec pantheon of gods with those of the Greeks, archaeologist Brian Fagan, in his book The Aztecs, writes of the Aztec gods:

“They were related to one another, but in no systematic way as, say, many of the Greek deities were. Nor was there a hierarchy of gods and goddesses.”

As with religions elsewhere in the world, such as Christianity, the religion of the Aztecs incorporated the beliefs, ceremonies, and deities of earlier religions. Some of the deities were the patron deities of social, political, or economic groups; some were tribal deities. Brian Fagan reports:

“Even individual people might have their own special divine patrons, usually the deity associated with the day of their birth.”

With regard to the importance of the deities and religion to the daily lives of the Aztecs, Brian Fagan writes:

“The Mexica believed that they lived only through the grace of the gods, the deities who gave them sustenance, rain, and everything that flourished on earth. Almost every act, however trivial, was surrounded with a religious symbolism that is difficult for us to understand.”

Today, we don’t know exactly how many deities (gods and goddesses) were worshiped by the Aztecs. To confuse the issue for non-Aztec people, the deities often have several names reflecting their many aspects. In his book Aztec Thought and Culture: A Study of the Ancient Nahuatl Mind, Miguel León-Portilla writes:

“Quite often they are designated by a number of different names. In addition, the myths interweave, overlap, merge, and become tinted with local color.”

Listed below are a few of the better-known Aztec deities:

“The god was a combination of the male and female generative forces, associated with fire and maize and also called the Old Sorcerer.”

“Huitzilopochtli appears in the earliest histories of the Aztec, as patron and protector on the long journey out of Aztlan to Tenochtitlan.”

“A minor god elevated to greatness by imperial propagandists, Huitzilopochtli became the very personification of virile warriorhood, a young, brave god, who sought constant human sacrifices as his rightful due.”

Michael Coe and Rex Koontz, in their book Mexico: From the Olmecs to the Aztecs, describe Huitzilipochtli this way:

“…he was the tutelary divinity of the Aztec people; the terrible warrior god of the Sun, he needed the hearts and blood of sacrificed human warriors so that he would rise from the east each morning after a nightly trip through the Underworld.”

With regard to his prowess as a war god, Huitzilopochtli provided miraculous powers to the Aztecs which enabled them to defeat their enemies and expand their empire.

“One of the more horrifying Aztec practices was the sacrifice of small children on mountain tops to bring rain at the end of the dry season, in propitiation of Tlaloc. It was said that the more the children cried, the more the Rain God was pleased.”

The wife of Tlaloc is Chalchiuhtlicue (The Lady of the Jade Skirt) who is the goddess of water.

“He was the god of spring and the renewal of the vegetation, impersonated by priests and those doing penance, wearing the skin of a flayed captive—the new skin symbolizing the ‘skin’ of vegetation which the earth puts on when the rains come.”