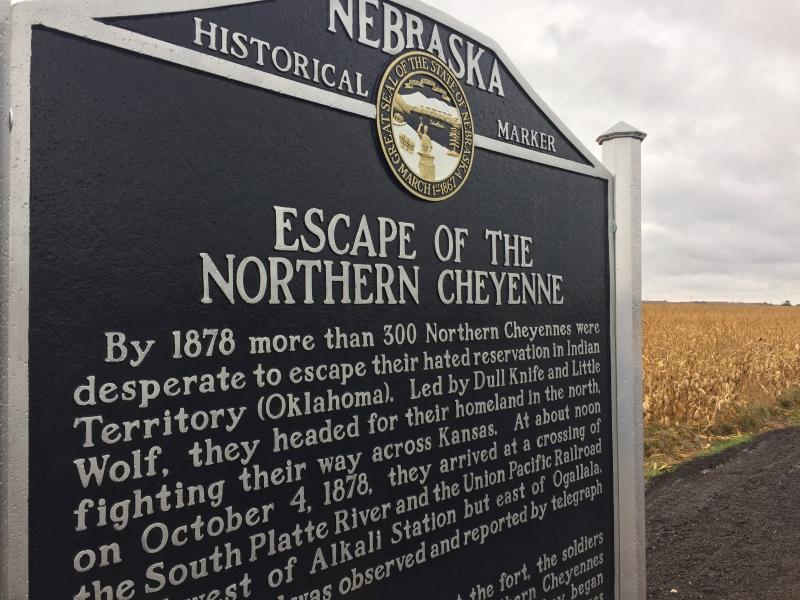 In 1876, the 7th Cavalry under the leadership of Lt. Col. George Armstrong Custer attacked a peaceful Lakota Sioux and Cheyenne village on the Little Bighorn River in Montana. Following the Indian victory, the Cheyenne moved back into the Bighorn Mountains. In Wyoming, an army of 1,000 cavalry attacked the Northern Cheyenne winter camp of Dull Knife, Wild Hog, and Little Wolf, destroying tipis, clothing, and food supplies.

In 1877, the main body of the Northern Cheyenne, which included Dull Knife, Little Wolf, Black Wolf, Standing Elk, Spotted Elk, and Magpie Eagle, surrendered to the Americans at the Red Cloud Agency in Nebraska. The four Old Man Chiefs—Little Wolf, Morning Star, Dirty Moccasins, and Old Bear—were with this group. The Cheyenne were then force-marched for 70 days to the reservation in Indian Territory. When they surrendered they had expected reservation life, but they had not anticipated a 70-day forced march to a reservation far from their homeland.

In 1878, the Northern Cheyenne, under the leadership of Dull Knife, Wild Hog, and Little Wolf, left the reservation where they had been starving and began a trek north to their homelands. In his book Perilous Pursuit: The U.S. Cavalry and the Northern Cheyennes, Stanley Hoig reports:

“Although Dull Knife still held great influence and was a principal spokesman for the Cheyennes, Little Wolf was the main leader of the exodus and directed its course. Wild Hog was next in rank.”

They left the reservation with their lodges standing and their fires burning in order to deceive agency authorities. Of the 353 Northern Cheyenne who slipped away from the agency, only 60-70 were seasoned warriors.

The news media reported that the Cheyenne had “broken out” of the reservation and both soldiers and civilians pursued them. According to Smithsonian curator Herman Viola, in his book After Columbus: The Smithsonian Chronology of the North American Indians, the Cheyenne lacked tents and sufficient food in their “desperate dash for Montana.” In his book Tell Them We Are Going Home: The Odyssey of the Northern Cheyennes, historian John Monnett reports:

“Immediately the army marshaled the technological resources of a modern nation against them.”

The first military engagement between the fleeing Northern Cheyenne and the U.S. Calvary was at Turkey Springs in Oklahoma. Without authorization, a junior officer opened fire on the Cheyenne. Stanley Hoig reports:

“No sooner had the troops opened the hostilities than Cheyenne warriors emerged from ravines on both sides and in the rear to join those at the front in raking the troops with rifle fire.”

The cavalry retreated and the Cheyenne withdrew. Stanley Hoig sums up the encounter this way:

“The encounter with the Northern Cheyennes had been a near disaster for the Fort Reno troops.”

“Little Wolf’s strategy was to position his main fighting force among the rocks and cutbacks of the canyon, draw the troops into it, and then close the trap with riflemen posted along the canyon walls.”

The American troops were caught in an indefensible position and the soldiers, with their recent encounters with the Cheyenne fresh in their minds, attempted to flee as quickly as possible. In their haste, no one fought back and many of the horses bolted leaving the troops on foot.

In Nebraska, the troops who were pursuing the Cheyenne found an old man who was weak and who had fallen behind the main band. The soldiers did not harm the man, but turned him over to a group of Nebraska citizens. As the soldiers rode away, the Nebraskans shot the old man.

In western Nebraska, the Cheyenne came upon Milton Connors’ ranch. According to Walter Echo-Hawk, in his book In the Courts of the Conqueror: The 10 Worst Indian Law Cases Ever Decided:

“Often traveling at night, they were guided by an elderly woman blessed with a mysterious power to see in the dark.”

The starving refugees captured 40 horses, 40 steers, and one mule from the ranch.

Little Wolf led a group of 126 (40 men, 47 women, 39 children) with the intention of traveling to the Powder River country in Montana. Traveling with Little Wolf were the warriors Starving Elk, Black Coyote, Buffalo Calf Road Woman, and Black Crane. Little Wolf’s band avoided the military and travelled into the Dakotas and then into Montana. His band was met by scouts from Fort Keogh who assured Little Wolf that his people would not be harmed if they surrendered. They were given rations and followed the scouts back to the Fort. Many of the warriors enlisted in the army as scouts.

Many of Dull Knife’s people had relatives among the Oglala Sioux and so they set out for the Red Cloud Agency near Fort Robinson, Nebraska. According to historian John Monnett:

“Dull Knife had friends and relatives among the Lakotas who had been relocated to Pine Ridge, and he felt his people would be safe there even if they had to surrender to the soldiers.”

In Nebraska, Dull Knife’s Cheyenne band surrendered to the Americans at Fort Robinson. The Cheyenne leaders expressed their passionate determination not to return to Indian Territory before they surrendered to the Americans. They hoped to get permission to join the Oglala Sioux at the Red Cloud Agency. The Cheyenne were unaware that the Red Cloud Agency had been closed and the agency for the Sioux was now at Pine Ridge in South Dakota.

The Americans consider the Cheyenne as prisoners of war. The post surgeon reported that there were 149 Cheyenne: 46 men, 61 children, and 42 women. Most were near starvation and all were suffering from chills and fever. The leaders were Dull Knife, Bull Hump (Dull Knife’s son), Wild Hog, Tangle Hair, and Strong Left Hand. The Cheyenne were placed in a barracks.

At Fort Robinson, a number of Sioux chiefs—Red Cloud, Red Dog, Little Wound, and others—arranged to meet with the Cheyenne under strict military supervision. There was a joyous reunion between the two groups. Among the Cheyenne prisoners were the daughter of Sioux scout Two Lance and the sister of Chief Red Cloud.

The American commander told the Cheyenne:

During the warmer days in December, the Army forced the women to work unloading grain wagons. Alan Boye, in his book Holding Stone Hands: On the Trail of the Cheyenne Exodus, reports:

“The women worked through bitterly cold days without gloves and considered it more slave labor than anything else.”

The Army viewed this as a way of giving the women exercise.

“You may kill me here; but you cannot make me go back.”

The Americans arrested Wild Hog, Old Crow, and Strong Left Hand and held them as hostages as a way to force the Cheyenne to agree to return to the south.

In 1879, the army withdrew all food, water, and fuel from the Northern Cheyenne who were being held in a sealed room at Fort Robinson. The army hoped to starve them into submission so that they would return to Oklahoma. Dull Knife told the people:

“Let us never give up to these people, to be taken back south to the country we have run away from. We have given them everything we have and now they are starving us to death. We may as well die here as to be taken south and die there.”

Under the leadership of Little Shield, the Cheyenne broke out of the garrison in an act of desperation. During the first few minutes of the breakout, 21 Cheyenne were killed and nine more were killed later that morning. Of those killed, 22 were women and children.

During the next week, the Army tracked the Cheyenne in the winter snow, killing them when they found them. The War Department ordered the troops to attack without mercy. Finally, a group of 32 Cheyenne made their final stand in a pit above a creek and 25 were killed. By the end of the week a total of 72 Cheyenne had been killed.

After they were recaptured, 20 Cheyenne who were suspected of involvement in the killing of American settlers were sent to Oklahoma for trial. Among those taken to stand trial were Wild Hog, Tangle Hair, Strong Left Hand, Old Crow, Porcupine, Noisy Walker, and Blacksmith. The remaining survivors were escorted to the Pine Ridge Agency in South Dakota.

Cheyenne leader Dull Knife, his wife Pawnee Woman, his son Bull Hump, and Bull Hump’s wife remained concealed in the bluffs for ten days after the Army defeated them. The small party of starving Cheyenne, who were so hungry that they were eating their moccasins, eventually made its way to the home of Gus Graven who was married to a Lakota woman and who was trusted by Dull Knife. Graven then hid the group in the home of William Rowland, an interpreter. Rowland then slipped the group in among Red Cloud’s Lakota on the Pine Ridge Reservation in South Dakota.

In an out of the way bluff on Wounded Knee Creek, a lodge was set up for Dull Knife and his family. It was here that he learned of the fate of the others in his band.