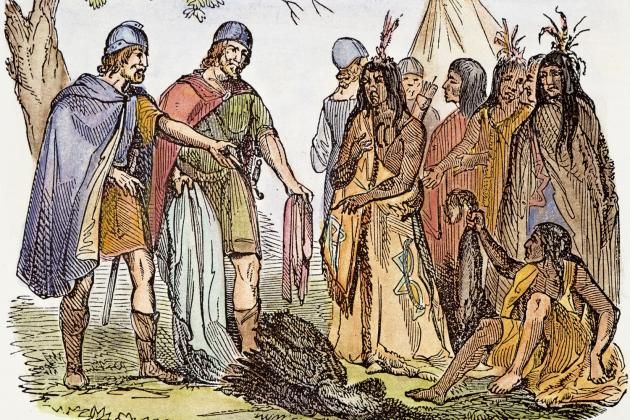 More than a thousand years ago, the Norse—commonly called Vikings—had expanded their settlements west from Scandinavia into Britain, Ireland, Iceland, Greenland, and North America. Both Ireland and Britain were, of course, occupied by farming peoples and the establishment of Norse settlements required the force of arms. Iceland was uninhabited (though some sources indicate that there may have been a handful of hermit Irish monks) and Greenland was sparsely populated by nomadic hunter-gatherers. In North America, the Norse encountered natives whom they called Skraelings who were not always friendly.

The Norse sagas describe a number of conflicts with Skraelings. The Norse word saga means both “what is said” and “story, tale, or history.” While the sagas have been written down, they were originally oral histories and their accuracy in describing historic events are hotly debated by scholars.

There was a time when many historians doubted that the Norse had explored North America, but archaeology has verified the existence of one permanent Norse settlement at L’Anse aux Meadows in Newfoundland and there is some evidence of other settlements and camps.

While the Norse are often stereotyped as fierce warriors who raided monasteries and towns, this was not how they saw themselves. The designation Viking refers to only one Norse activity: raiding. The Norse were also traders, farmers, shipbuilders, explorers, merchants, manufacturers, and statesmen. In his article in Vikings: The North Atlantic Saga, William Fitzhugh writes:

“Despite their reputation as shipbuilders, sailors, and warriors, the Norse identified themselves as farmers rather than as fishermen, hunters, trappers, or traders, even though individual Vikings might spend considerable periods of the year engaged in these tasks.”

Cattle were an important food source which provided the Norse with dairy products including cheese, butter, and skyr. The cattle, which were relatively small—standing less than 48” at the shoulder—could be transported in their longships.

L’Anse aux Meadows, an archaeological site located in Newfoundland, was settled about 1000 CE and was occupied for only about a decade. At L’Anse aux Meadows, archaeologists have uncovered eight buildings which are grouped into three complexes. The structures indicate that this was not a temporary campsite, but a settlement which was occupied year-round. It is estimated that the settlement had a population of 70-90 people. While the sagas indicate that the Norse carried cattle with them, there are no indications that the Norse at L’Anse aux Meadows had cattle: there do not appear to have been any outbuildings, corrals, or animal pens. If the Norse had cattle with them, they must have been left in the open.

The Norse at L’Anse aux Meadows did some iron smelting at the site, probably to produce boat nails to be used in repairing their longships.

One of the intriguing clues from L’Anse aux Meadows is the presence of butternuts, a butternut burl that was cut with iron tools, and grapes at the site. Butternut trees, also called white walnut, have never grown in Newfoundland and the butternuts must have come from someplace farther south. The closest area for butternuts is the Saint Lawrence River Valley, just east of present-day Quebec City. Archaeologist Birgitta Wallace, in an article in Vikings: The North Atlantic Saga, reports:

“The significance of the nuts is that they indicate that the people who lived at L’Anse aux Meadows made excursions to regions farther south. Butternuts grow in the same areas as wild grapes, so whoever picked the nuts must have come across grapevines as well. This was the first archaeological proof that the saga stories of the Norse encountering wild grapes are not myth but based on reality.”

“Putting all the evidence together, we find that L’Anse aux Meadows was not a colonizing venture but a base at which a large group of people, perhaps three ship crews, stayed for a short time.”

At L’Anse aux Meadows there is little evidence of contract between the Norse and Native Americans. Turning from archaeology to the sagas, however, we see that the Norse did have some contact.

The Icelandic sagas are based on oral traditions. They are stories of events which took place in the period between 930 and 1030, an era known as söguöld (Age of the Sagas) in Icelandic history. The stories describe voyages, migrations, and feuds. The sagas focus on history, particularly genealogical and family history. Sometime after 1190, these stories were written down in Old Norse.

According to the sages, the Norse under Karlsefni, Snorri, and Bjarni, sailed south to the land they called Hop at the mouth of a river. Here they found wild wheat as well as grapes. They had been here a couple of weeks, allowing their cattle to graze freely, when nine canoes made of hides came into view. The Norse made peaceful contact with the Skraelings, who are described in the sagas as:

“They were short men, ill-looking, with their hair in disorderly fashion on their heads; they were large-eyed, and had broad cheeks.”

According to the sagas, the Norse constructed dwellings and remained at Hop through the winter. They let their cattle graze freely without keepers. In the spring, a large number of canoes appeared and a market was held in which the Norse traded cloth for furs. While the Skraelings wanted to trade for iron swords and lances, Karlsefni and Snorri did not allow it. At one point in the market, a bull belonging to Karlesefni ran out of the woods and bellowed loudly. The Skraelings viewed this as a threat and hurriedly left.

Three weeks later, a large group of Skraelings appeared and there was a battle with the Norse. In the initial attack, the Skraelings drove the Norse back, but Freydis, who was pregnant, picked up a sword from a dead Norse warrior, banged in on her naked breast, and counter-attacked, driving the Skraelings off. Following the battle, the Norse decided that this was not a good place to settle, so they moved on.

Karlsefni journeyed south with forty men for about two months. They reported seeing nothing but wilderness and returned home.

What we know at the present time is that the Norse were in North America more than a thousand years ago. Their contacts with the Native Americans appear to have involved some limited trade and probably some violence. The sagas and the archaeological evidence at L’Anse aux Meadows show that they journeyed south of Newfoundland. What we don’t know is how far south they traveled—some writers feel that they sailed as far south as Cape Cod in Massachusetts. Archaeological data confirming their southern journeys is difficult to find as it would be in the form of temporary campsites with no permanent structures.

While the sagas provide us with some possible clues about what might be locations of Norse sites in North America, there is also some puzzling information. The archaeological data from L’Anse aux Meadows and the saga’s description of Hop, sound as though there should be a Norse site along the Saint Lawrence River. However, the saga indicates that the Skraelings used hide-covered canoes, which may indicate Inuit craft from farther north. At the time of later European contact in the Saint Lawrence area, Native Americans were using dugout canoes and bark-covered canoes, but not hide-covered canoes. This may indicate: (1) that Native watercraft in that part of North America changed during the six centuries between initial Norse contact and later European contact; or (2) the Norse saga was mistaken about the covering used on the canoes.

Ancient America: Nebraska Prior to 6000 BCE