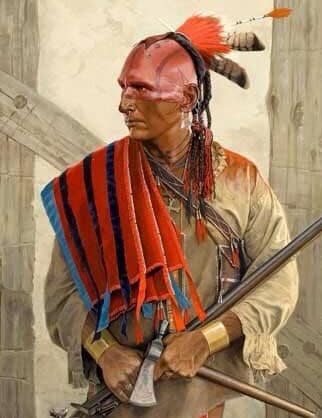 The Huron, whose traditional homeland was north of the Great Lakes, were a confederacy of four major tribes: Bear, Rock, Barking Dogs, and White Thorns (also known as Canoes). The people called their confederacy Wendat or People of the Peninsula. They were given the name Huron by the French: the name came from hure, meaning “boar’s head” in reference to the head gear of the warriors.

With regard to language, Huron is a part of the Iroquois language family. Culturally, the Huron were similar to other Iroquoian-speaking Indian nations in the Northeast.

In the seventeenth century, the estimated 20,000 to 40,000 Hurons lived in 18-25 villages. With regard to the Huron origins, Olive Dickason, in her entry on the Huron/Wyandot in the Encyclopedia of North American Indians, reports:

“Archaeologists favor the theory that they began inhabiting their lands soon after the retreat of the glaciers, slowly evolving from hunter-gatherers into farmer-hunters.”

Their oral traditions tell of a migration from the southeast. The archaeological data shows that they were raising corn (maize) by 500 CE.

Among the Huron, agriculture produced about four-fifths of the food which they consumed. Farming centered around the Three Sisters: corn, beans, squash. They cultivated about 15 different varieties of corn, 60 different varieties of beans, and 8 different kinds of squash. As with other Iroquoian groups, the farming was done by the women in fields which had been cleared by the men. All uncleared land was considered common property.

The land was cleared by first girding the trees and then burning the underbrush and trees, a process known as slash-and-burn agriculture. In addition to providing a clear space for their fields, the ash from the fire also provided additional nutrients.  Generally, the cleared land would wear out in about a decade, forcing the Iroquois to clear new land, usually farther from the village. For the smaller villages – those with about 200 inhabitants – by the time the walking distance to the farthest field reached about 1 kilometer, the oldest abandoned fields could be re-opened. For the larger villages, however, it took about 50 years for the productive fields to become too distant and requiring the village itself to move.

Planting would usually begin when the white oak leaves were the size of a red squirrel’s foot. While men would assist in the initial clearing of the fields, planting was done by a party of women under the supervision of the clan mothers. Women did the planting, weeding, and harvesting.

The three crops complemented each other. In her article on the Three Sisters in Science and Native American Communities: Legacies of Pain, Visions of Promise, Jane Mt. Pleasant reports:

“Beans, because they are legumes, add nitrogen to the soil that the other two plants need.”

“Now the squash, because it grows low to the ground and has very big leaves, reduces the ability of weeds to grow and interfere with the food crops.”

When the three foods are eaten together, they provide a balanced diet of vitamins, minerals, carbohydrates, and the full complement of amino acids for protein.

In general, the most important feature of social organization among Iroquoian-speaking people was the matrilineal: this was a named group in membership was through the female line. Each person belonged to the mother’s clan. Among the Huron, there were eight matrilineal clans: Turtle, Wolf, Bear, Beaver, Deer, Hawk, Porcupine, and Snake. The clans were exogamous, meaning the people had to marry outside of their own clan. In addition, marriage to a close relative on the paternal side was also taboo.

Among the Huron, there was little public affection displayed between men and women. Sexual intercourse for both married and unmarried people tended to take place outside of the village. Premarital sexual intercourse was considered to be normal.

Among the Huron, families tended to be small – 3 children – because the women abstained from sexual intercourse during breastfeeding (usually about 3 years).

With regard to the gender of children among the Huron, anthropologist Elisabeth Tooker, in her monograph An Ethnography of the Huron Indians, 1615-1649, notes:

“Girls were preferred: the Huron rejoiced more in the birth of a daughter than a son, in order that the country’s inhabitants increase.”

There were three levels of government among the Huron: village, tribe, and confederacy. At the village level, clan chiefs organized councils in which older men and women expressed their opinions on matters concerning the village. Each Huron village council met frequently, often daily, to discuss village affairs. Discussions would continue until consensus was evident.

There were two kinds of Huron chiefs: (1) civil chiefs who were concerned with everyday life and peace, and (2) war chiefs who were concerned exclusively with military matters. Being a Huron chief required both time and an expenditure of wealth. Upon the death of a chief, the new chief would often be selected from among the relatives of the deceased chiefs. The person who was elected was usually not the child of the deceased chief, but was more often a nephew or a grandson.

The Huron recognized four main classes of crime: (1) murder and wounding and injury, (2) theft, (3) witchcraft, and (4) treason. Murder placed an obligation on the relatives to avenge the killing. Reparation payments helped alleviate the possibility of blood feuds. Anthropologist Bruce Trigger, in his book The Huron: Farmers of the North, notes:

“Huron law did not permit society as a whole to punish individuals.”

Among the Huron, material gifts were often used as a way of restoring peace and mending the social fabric following a crime, such as murder or physical injury. The guilty party (including both the individual and the clan) would pay the victim’s family. According to Henry Bowden, in his book American Indians and Christian Missions: Studies in Cultural Conflict:

“Thirty presents was the usual indemnity for killing a man, but the murder of a tribeswoman called for forty gifts.”

For Huron men there were two ways to obtain wealth and prestige: war and trade. Traditionally, war was not waged to impose religious views on other people, or to capture new territory. Most frequently the reasons for war were honor and avenging some injury. Revenge raids were usually launched at the request of a clan mother.

While brave warriors were admired, so were clever traders. Trading had prestige because individual initiative and shrewd judgment came into play. It took courage and diplomacy to open new trade routes or to organize a wide network of business alliances. The purpose of acquiring wealth through trade was not to possess or display material goods, but to be able to give them away. Giving wealth away was a way of improving social status and respect.