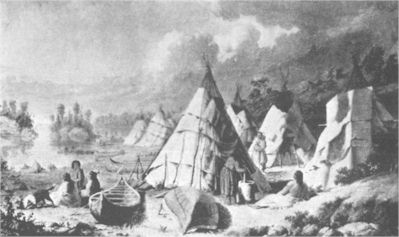 The Huron, an Iroquoian-speaking people whose traditional homeland was north of the Great Lakes, were a confederacy of four major tribes: Bear, Rock, Barking Dogs, and White Thorns (also known as Canoes). The people called their confederacy Wendat or People of the Peninsula. They were given the name Huron by the French.

The first contact between the Huron and the Europeans was with the French explorer Jacques Cartier in 1535. At the palisaded Huron town of Hochelaga, the French were greeted by about a thousand Huron men and women. The French did not care for the Huron food – cornbread, beans, peas, and cucumbers – because it was not salted.

In 1609, some Huron warriors joined French explorer Samuel de Champlain and a mixed group of Montagnais and Algonquin warriors. While Champlain wanted the warriors to keep watch at night, they refused. Instead, they conducted a shaking tent ceremony and consulted the spirits about the nearness of any enemies. The spirits indicated that no enemy were near and so the warriors slept.

At the northern shore of what is today called Lake Champlain, the combined French, Montagnais, Algonquin, and Huron forces encountered a Mohawk war party massed in battle formation and wearing wooden body armor. The French firearms killed several Mohawk leaders and the Mohawk retreated. In an article on the French and Indians in Attitudes of Colonial Powers Toward the American Indian, Mason Wade reports:

“This exploit sealed the alliance of the French with the Algonkians and the Hurons and fixed their deadly enmity with the Iroquois.”

In 1611, Samuel de Champlain arranged for a young Frenchman to live among the Huron and learn their language and culture.

A formal trading alliance between the French and the Huron Confederacy was negotiated in 1614. With this agreement, the Huron allied themselves with the French.

The following year, Huron warriors accompanied Samuel de Champlain into Iroquois territory in what is now New York. They captured three Iroquois men, four women, three boys, and a girl. Champlain complained when the Huron cut off one of the women’s fingers as a demonstration of the torture that lay ahead. The Hurons agreed not to torture the women.

Near present-day Fenner, New York, the French-Huron party attacked an Iroquois fort. After the initial attack, the Huron warriors withdrew. Champlain then convinced the warriors to build large wooden shields for protection and a large moveable platform which overlooked the Iroquois palisades. While the plan had initial success, the Huron warriors, unused to the discipline expected by European military leaders, broke ranks and attempted to set fire to the palisades. The Iroquois, however, simply poured water into the troughs which formed their fire defense system and the fires were quickly extinguished. Champlain was hit twice by arrows and was severely wounded. The Huron retreated carrying their wounded, including Champlain, in improvised baskets.

The Iroquois, who had been trading with Dutch traders in New York, sent emissaries north to propose peace and trade with the French. This would allow them to play the two European powers against each other with regard to trade. While the French were concerned that the Iroquois would convince the Huron to start trading with the Dutch, they agreed to the peace in 1622.

In 1623, the French sent a party of French traders to winter with the Huron to make sure that they continued to trade with the French rather than with the Dutch.

In 1642, a party of 36 Huron and 4 French under the leadership of Father Isaac Joques was attacked by an Iroquois war party. The priest and 21 others were captured. The Mohawk, one of the nations of the Iroquois League of Five Nations, later killed Father Joques in the manner reserved for sorcerers because he was suspected of started an epidemic.

In 1648, the Seneca and the Mohawk, both members of the Iroquois League of Five Nations, set out to destroy the Huron trading network. The Seneca, armed with firearms obtained from the Dutch, attacked the Huron town of Teanaostaiaé. Three hundred of the 2,000 inhabitants of the town were killed and 700 were taken captive. The following year, the Iroquois, supplied with 400 guns and unlimited ammunition on credit by the Dutch, attacked and destroyed the Huron. This marked the end of the Huron confederacy. Many of the Huron people took refuge with other Indian nations in the Great Lakes area. A new nation, however, the Wyandot, composed of Huron refugees as well as other Indian refugees, soon emerged, but did not challenge the Iroquois supremacy.