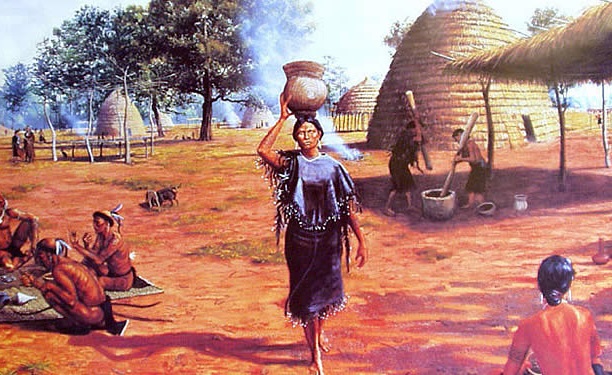 The Caddo were an agricultural tribe living in what is now Louisiana and Texas when the first European explorers entered the region. The Caddo were a group of theocratic chiefdoms who were the cultural descendants of the earlier Mississippian mound-building cultures.

The term “Caddo” originates from one particular tribe, the Kadohadacho who occupied the area around the Great Bend of the Red River in Texas. The term is also applied to a number of other tribes in the region who have a similar language and culture.

Below is a very brief description of some of the elements of Caddo religion.

Among the Caddo, fire was an important spiritual element. Each village would have a sacred fire which was tended by an elder. The fire would be kept burning continuously for if it were allowed to go out, then all in the village would die. The sacred fire was kept in a special house. Within the fire, the wood would be arranged to reflect the directions of the four winds.

The Drum Dance (Cah-kit-em’-bin) is a ceremony which relates the origins of the Caddo people. The dance is led by men, both singers and drummers. The 11 songs take the people through the migrations and other events in their history. The ceremony reconnects the people with their ancestors and traditions. In an article in Chronicles of Oklahoma, Vynola Beaver Newkumet and Howard Mededith write:

“The Hasinai people have moved through their history each time the dance is performed. It makes them one with their ancestors.”

Each fall after the crops were harvested, the Caddo would have a special feast, the Harvest Ceremony. The ceremony was traditionally held with the September new moon. The ceremony included the drinking of a special tea and the smoking of the pipes.

On the night of the ceremony, a watchman would observe the heavens, paying close attention to the Pleiades, the Star Women. When the Pleiades were straight overhead, then the elder in charge of the ceremony would be informed. Then a dance led by three elders wearing buffalo robes would begin.

The Sacabb was a Caddo ceremony in which the events of the coming year were foretold. As with other Caddo ceremonies, this included the drinking of a special tea and the smoking of the pipes. Of special concern was the weather for the coming year as this impacted their crops.

Among the Caddo, the body of an ordinary person was placed in the grave with the head facing toward the west. Traditionally, the dead were buried in a sitting position. Food and personal equipment – bows, arrows, knives for men and household utensils for women – were then buried with the body. Ordinary people were generally buried in a family cemetery near the house in which they lived.

“tend to contain rich artifact caches, many with items that could only have been obtained through long-distance trade.”

The burial mounds often contain more than one body and were used over a long period of time.

Among the Caddo, the soul of the dead did not leave the vicinity of the body for six days. The souls of the dead were weak and it was therefore important to feed them by leaving food and water on the grave.

Before the body of a deceased Caddo was removed from the house, those present could send messages to the deceased by passing their hands over the body, from feet to head, and then over their own body. It this way messages could be sent via the deceased to other dead relatives.