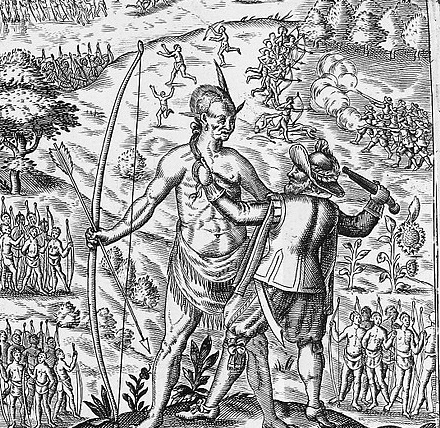 In response to an earlier diary on American Indians as slaves, one reader asked what happened to the Indians who had been taken to Europe. While most died in Europe, often from unfamiliar diseases, there were a few who returned to their people in North America. This is the story of one who came back.

Among Indian nations prior to the European invasion, it was a fairly common practice for two nations to exchange young people. These young people would then be given the opportunity to learn the language and customs of the other nation. When they returned to their own nation, these people were able to serve as interpreters (of both language and custom) as well as ambassadors between the two nations. When Indian nations first began to have contact with the European nations – Spain, Portugal, France, and England – they saw a great deal of merit in continuing this practice. Consequently, many young Indians (mostly boys) were taken to European to learn European languages and customs.

In 1561 the Spanish explorer Pedro Menendez de Aviles entered what he called the Bahía de Santa María (now called Chesapeake Bay). The Powhatan Indians paddled canoes out to meet the Spanish ship. One of the Indians, a young man of about 16-17 years of age, was the chief’s son. Intrigued with the young man’s willingness to learn their ways, the Spanish asked permission to take him across the Atlantic to meet the King of Spain. They promised to return him with much wealth and many garments.

Unaware of the young man’s Indian name (or perhaps unable to pronounce it), the Spanish renamed him Luis. From an Indian viewpoint, the practice of taking a new name during a new phase of one’s life was not only acceptable, but expected.

Luis was taken to Spain where he was introduced to King Philip II as an important chief (cacique) from Florida. He was placed with the Dominican friars so that he could learn Spanish and Christianity.

Pedro Menendez de Aviles returned to the Americas in 1563. True to his pledge to the Powhatan people, he brought Luis with him so that he could be returned to his people. However, the Archbishop of Mexico, fearing the Luis might relapse into his former “devil” worship, refused permission and Luis remained with the Dominicans in Mexico.

In 1566 the Spanish King named Pedro Menendez de Aviles adelantado (conqueror) of Florida and issued a royal order which gave the custody of Luis to him. In an attempt to carry out his word to the Powhatan (and to begin colonizing), the Spanish explorer set sail for the Bahía de Santa María (Chesapeake Bay), but he missed the entrance to the Bay and returned to Spain with Luis.

In Spain, Luis was placed with the Jesuits to further his knowledge of Spanish and of Christianity.

The Spanish Jesuits established a mission on Chesapeake Bay in 1570 as a way of extending the Spanish empire north of Florida. Accompanying the priests was Luis. Upon returning to his people, Luis found that his brother Wa-hun-son-a-cock had become the main chief of the Powhatan.

When Wa-hun-son-a-cock became the main chief, he took the name of his village and thus he was also called Powhatan.

The priests of the Spanish colony on the Chesapeake Bay were shocked when Luis began to revert to Indian ways by taking several wives. Before the entire company, Luis was sanctimoniously reprimanded and humiliated. In response Luis renounced Christianity and went to live in a village on the Pamunkey River. He discarded the name Luis and took the name Opechancanough which means “he whose soul is white.”

In 1571 the priests from the Spanish colony at Chesapeake Bay persuaded the Indians from Opechancanough’s village to return to their mission with them. However, the Indians killed the priests and then attacked the mission, killing all except for one boy (Alonso). This incident marked a change in the relationship between the Powhatan Confederacy and the Spanish Jesuits. Instead of submission and respect, the attributes which the Jesuits attempted to instill among the Indians through humiliation and brutality, the Indians now openly viewed Spaniards and Christianity with hatred.

When the Jesuit supply ship from Havana arrived it was not met with the expected signals and did not land. There was, however, a brief fight during which the Spanish obtained one captive. From this captive they found out that only Alsono had survived the attack on the mission.

In response to the attack on the mission, the following year the Spanish sent an armed ship with 30 soldiers to invade Powhatan territory. The Spanish soldiers killed several Indians and managed to capture Alonso. They found that Alonso had almost forgotten how to speak Spanish.

For the next three decades, the European written histories of the Americas make no mention of Opechancanough (once known as Luis). In the early 1600s, however, he emerges again as an Indian leader who is dealing with the English settlers in Powhatan territory.

In 1607 the English established a colony at Jamestown. The English colonists were unprepared for life in the Americas. The Powhatan, on the other hand, were excellent farmers and they freely shared their surplus crops (corn, beans, squash) with the English. One of the figures who emerged as an important emissary between the colonists and the Powhatan nation was Opechancanaugh’s niece, the youngest daughter of Powhatan (formerly known as Wa-hun-son-a-cock), a girl called Pocahontas.

From an Indian perspective, the food was freely given to the colonists as a gesture of friendship and good will. Many of the colonists, however, viewed the good as something the Indians “owed” them as tribute to the “natural superiority of the English.” A year after the establishment of the colony, the hungry colonists under the leadership of Captain John Smith attempted to obtain corn from the Pamunkey who were under the leadership of Opechancanough. When the chief indicated that he was unwilling to trade, the captain held a gun to the chief’s breast and threatened to kill him unless their boats were filled with twenty tons of corn. He also told Openchancanough that if his boats were not filled with Indian corn, he would fill it with their dead bodies.

By 1610, the Powhatan Nation was fed up with the English and their supreme chief asked them to leave. The tensions between the two people were marked with many small skirmishes. The Powhatan had the ability to exterminate the English but declined to do so because they believed that human beings – including the English – had honor and would do the right thing by leaving when they were not welcome. When the Powhatan stopped trading with the English, the English faced starvation and began eating their own dead.

The arrival of new supplies and new soldiers from England allowed the colony to survive and to begin a war against all of the Indians in the area. The English, under the banner of Jesus Christ, waged a religious war against the Indians who they saw as the dangerous servants of the Devil.

By 1613 the English colonists had still not acquired the skills they needed for survival in North America and were reliant on the good will and surplus crops of their Indian neighbors for food. By this time, the good will had worn a little thin because of English arrogance and an attitude that implied that the Powhatan people should be their servants. The Powhatan nation, hoping that the starving English would go home, stopped giving them food and stopped trading with them. In a desperate attempt to blackmail the Powhatan chief into giving them food, the English colonists kidnapped Pocahontas.

The following year, as a condition of her release from her English captors, Pocahontas agreed to marry John Rolfe and to change her name to  Rebecca Rolfe. At the Christian English-style marriage ceremony, Pocahontas was given away by her uncle Opechancanough.

In 1614 the English colonists concluded a formal, written treaty with the Chickahominy in which the Indians agreed to send an annual tribute payment of corn to Jamestown. While this appeared to be very favorable for the English, the treaty between the English and the Chickahominy was actually masterminded by Opechancanough. In a master stroke of forest diplomacy, Opechancanough deluded the English into believing that the Chickahominies were their allies while at the same time he was secretly drawing the once recalcitrant tribe closer to membership in the Powhatan empire.

In 1616 the English colonists obtained the new snaphance muskets which used a flint on steel ignition rather than a burning wick. Opechancanough convinced the English to share the new guns with the Indians and to show their warriors how to use them. In exchange, the English were allowed to give Christian instruction to the Indians.

By 1616 the English had still not learned how to provide their own food. Instead of raising food crops, they had focused their energies on raising tobacco which they had hoped would become a major cash crop. Once again they ran out of food and were on the point of starvation. To survive, they send for their annual tribute of corn from the Chickahominy. Instead of sending corn, the Chickahominy simply claimed that they had already paid the tribute. The next day, the English went to war and killed 20-40 Chickahominy.

In 1618, the supreme chief of the Powhatan died and his lame younger brother Itopatin became the new Powhatan. The older brother, Opechancanough, had popular support from the people and there was some struggle for leadership between the two men. While Opechancanough did not assume the position of supreme chief, he was perhaps more powerful than the Powhatan.

By 1622, Opechancanough’s nephew, Nemattanew (Jack of the Feathers) had emerged as a charismatic war chief. He revitalized native culture and the warrior traditions. He would go to war covered with feathers and with swans’ wings attached to his shoulders. He was able to bewitch and confuse enemy warriors, including the English soldiers, and was thought to be invulnerable to bullets. However, the colonists soon disproved this claim when they shot and killed him.

Opechancanough then carried out an attack on the English colonies, killing 350 of the settlers (one-fourth of colony’s total population). The plan of attack was so skillfully devised, the organization of forces so effective, the element of surprise so perfectly preserved, that the English preferred to credit the Spanish with designing the strategy. They refused to believe that an Indian could have devised such a strategy. They continued to view Indians as “savage” and as “incapable of planning.” While there was no evidence of Spanish involvement, the English insisted that the Spanish had to have planned the attack.

In retaliation for the attack, the English carried out a series of raids on the Indians. Instructions from London to the Virginia colonies called for a perpetual war to exterminate the Indians and the Governor of Virginia issued a directive to kill, rob, and hunt down the Indians of the area.

In 1641, Thomas Rolfe, the son of Pocahontas, petitioned the Governor for permission to visit his mother’s uncle Opechancanough. At the time it was against the law for the colonists to speak or visit with the Powhatan. Permission was granted and he visited his mother’s people.