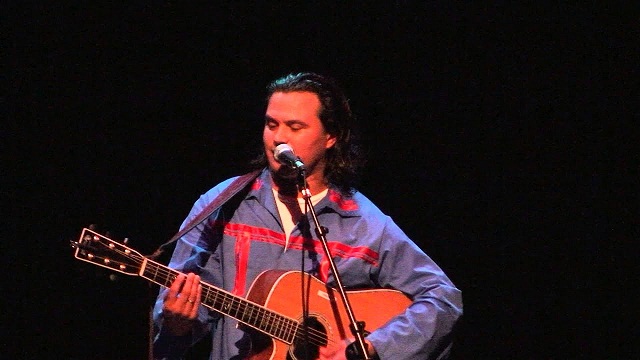 When Native American singer and activist Floyd Red Crow Westerman passed away in 2007, Jeremy Goodfeather’s Hunka (adopoted) mother asked him to play a few songs at the Oakland memorial, a request that launched an unexpected series of events for the San Francisco resident. “I had established myself as a community member within the Native circle, but people had no idea I could sing,” recalls Goodfeather, who’s debut album is out now on Round Whirled Records. “When they heard me playing Floyd’s songs, and some of my own, Native Americans are so politically involved that they began asking me to play shows and perform in public. Basically, the community instantly plugged me in.”

“With all this support from the Native community, I feel like I just wandered into music again,” Goodfeather modestly proclaims. But in reality the road to discovering his true inner songwriter was a long and arduous one; sharing the conservative hometown of Wasilla, Alaska with Sarah Palin left it’s mark on the songwriter as well. His father was a Mohawk from New York State and his mother was a mexicana from Texas, tracing her roots to before it was part of US, it’s own country, or part of Mexico. When his family dissolved, young Jeremy became a ward of the state, living between extended family and foster homes until he finally emancipated himself at 16.

“I wanted to be a rock star, so I moved to LA and joined a bunch of heavy alt-metal bands.” But after struggling with drug and alcohol abuse and the LA lifestyle, Jeremy realized that he didn’t have anything to say and called it quits. “I stopped writing music, hung up my guitar, and just traveled around with my uncle for a few years. I learned about what it is to be native, ideals, values, belief systems. That also includes political views, because as Native Americans we have no separation between church and state, political parties, and all that. It’s all the same to us.

“My whole world view changed during that period traveling around with my uncle. I learned who I was, or at least who I wanted to be. But I was just doing all that for myself, so I could find a way to live that worked for me. It wasn’t about the music.” The song “Wonderful Teacher,” track 10 on Goodfeather’s new album, is dedicated to his uncle, who passed away.

But the lessons live on in Jeremy’s songs. “When I write, I have no agenda of portraying any particular thing. It’s a reversal of me, me, me, self, self, self, and a move toward interdependence, interconnectedness, and symbiotics. The truth.” In his song “Dance Into the Light” he describes that relationship:

And everything is beautiful/

And everything is good/

From an insect to the space shuttle/

To this strung-up piece of wood

“We’re all part of the same system. Everything depends on everything else. If essentially we’re all related, we should respect one another. It’s real simple. You wouldn’t chop off your own foot.”

While Goodfeather’s songs stem organically from this basic philosophy, he is wary of classifying his music as “Native American.” After all, music is music. “I’ve seen performers on stage wearing fake feathers, loin clothes, just doing it up. I don’t carry that external image, and the Native community seems to really appreciate it. It’s Hollywood that pushes the image, but Native people are hungry for something more authentic. Now I’ve wandered into this area where the Native community has asked me to represent it, and when I go on as ‘the Native American act’ many people are surprised that the music actually has substance.”

And the substance is there. Each song has a story, a deeper message inspired by his connection with his community. “Many people might not know it,” Goodfeather explains, “but there is a large Native American population right here in the Bay Area. They were lured here off of the reservations with the promise of jobs in the 1960s.”  It’s this very community that has encouraged Goodfeather’s creative spirit and pushed him to the forefront of the Native American music scene, armed not with the cliché feathers and hackneyed songs about the four directions, but with his everyday construction worker’s baseball cap and something real to sing about.

“I struggle against the stereotypes because they’re limiting,” Goodfeather asserts. “‘Oh, you’re the Native artist, we’ll put you between the magician and the marionettes.’ You end up being treated like a novelty act.” But when you hear Jeremy belting out his heartfelt lyrics while he strums his “strung-up piece of wood” also known as a guitar, it’s clear that the vibrations causing the air to transmit sound are modern-day continuations of something set in motion ages ago, and that those vibrations are being transmitted throughout the universe for all to feel and hear.