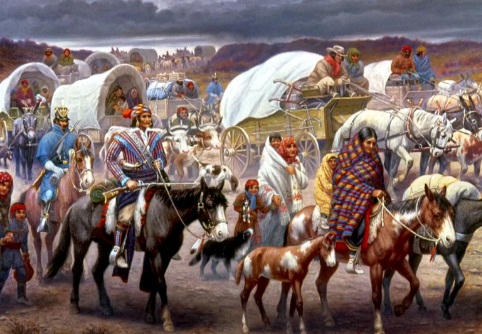 President Andrew Jackson informed a delegation of Chickasaw in 1830 that they had only two choices: either move west or submit to the laws of the state of Mississippi. The Chickasaw felt that the Great Spirit had given them their land and that it was the land where the bones of their ancestors lay. They did not wish to move west across the Mississippi River to a new land. On the other hand, the alternative of assimilation under the laws of the state of Mississippi did not seem realistic and so they agreed to move. Each of the Chickasaw chiefs at the conference-Levi Colbert, Samuel Sealey, George Colbert, and William McGilvery-was given four sections of land.

Levi Colbert held a conference in his home after the treaty was signed but before it is ratified by the Senate. The Chickasaw leaders at the conference then sent a long and bitter memorial to the President protesting the terms of the treaty and the manner in which it had been obtained.

The next year, the Chickasaw sent an exploring party to look at lands west of the Mississippi River for potential relocation. Included in the party are Levi Colbert, Pitman Colbert, Henry Love, and William McGilvery.

In 1835, the Chickasaw negotiated another removal treaty with the United States. This treaty divided Chickasaw lands into allotments to be sold by individual Chickasaw tribal members. A commission was formed to validate the sales and to manage Chickasaw finances, to distribute treaty annuities, find a western homeland, and speak for the nation. Ishtehotopa and several district chiefs, all men with planter or merchant backgrounds, made up this commission.

The Commission sent another exploring party to Oklahoma to try to find land. The party included Martin Colbert, Pitman Colbert, Thomas Colbert, and others. The group held another council with the Choctaw in Oklahoma but failed to obtain any land. The following year, the Chickasaw sent out still another exploring party to obtain land. The party included George Colbert, James Colbert, Henry Love, Benjamin Love, and other chiefs. Once again they met with the Choctaw and again failed to obtain land.

In 1837 the end had come. The American government, impatient to obtain Chickasaw lands and to rid the country of Indians, forced the Chickasaw to leave their ancestral lands. Government agents selected the removal routes and then threatened the use of military force and the withdrawal of all rations if the Indians deviated from the selected routes. It should be pointed out that the cost of the removal efforts were not being paid by the United States, but by the Chickasaw nation.

About 4,000 Chickasaw were brought to Memphis to be removed to Oklahoma via water. However, they heard about the sinking of the Monmouth in which 311 Creek men, women, and children had drowned and many refused to board the boats which have been assembled for them. Many prefered to cross the Mississippi and then go overland to their new home.

Kin-hi-cha led one group of 175 men, women, and children known as the Cleanhouse Indians who traveled with 206 horses and oxen. They boarded the steamer Itaska and were transported to the Arkansas Post. They then traveled overland to Little Rock and then to Oklahoma.

Once the Chickasaw were in Oklahoma, things did not go well. Chickasaw leaders James Colbert, Isaac Alberson, Sloan Love, Greenwood, George Colbert, and James Perry petitioned the federal government for help: “Many of our people have died and the general drought through the Indian country has been particularly felt through ours; for these reasons together with the fact that many of our people arrived too late to make a crop, makes it our duty to apply for further subsistence.”