In 1830, a new religion was born in the United States with the publication of The Book of Mormon. The new religion, founded by Joseph Smith, is unusual among non-Indian religions in that it incorporates some understanding of Indians into its teachings. The Book of Mormon, upon which the Church of Jesus Christ of Latter Day Saints is based, offers a history of Indians and sees them as the descendents of the tribe of Joseph, one of Israel’s twelve tribes. Following the Resurrection, Jesus Christ appeared among the Indians in the guise of Viacocha, Kukulcan, or Quetzalcoatl. In founding the new religious movement, Smith announced that he had a revelation to carry the message of the Book of Mormon to the Indians. 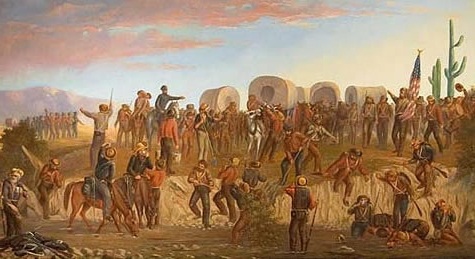 In 1846, the Mormons entered what is now Utah and began to build their Kingdom of God on Earth. Upon entering the Salt Lake Valley, the Mormons abandoned their earlier policy of buying or renting land from Indians and declared ownership based on divine donation and beneficial use. The area where the Mormons settled was a contested buffer zone between the Ute and the Shoshone. The Mormons intended to stay in Utah and thus they needed to develop a stable relationship with the Native Americans who inhabited the area. Brigham Young enunciated a policy of friendliness toward Indians that was designed to minimize tensions between settlers and natives.

In 1853, the Mormons established Fort Supply as an outpost in Shoshone country. During the winter, a number of Shoshone sought refuge with the Mormons. Seizing this as a learning opportunity, the Mormons tried to learn as much as they could from the natives regarding their marriage customs, burial rites, and the tribal roles of the medicine men. They also studied the Shoshone language.

At the same time, Brigham Young established the Southern Indian Mission and stressed that missionaries had to learn Indian languages in order to convert them.

Subsequently, a Mormon missionary party settled on the banks of the Salmon River in Idaho to work with the Bannock. The mission was located near a site where the Bannock, Shoshone, Nez Perce, and Flathead met each summer for gambling and horse-trading. The Mormons were greeted in a friendly fashion by Sho-woo-koo, also known as Le Grand Coquin, who assured them that they could use the land for farming.

The Mormons quickly began holding classes to learn the Shoshone language and they soon baptized 55 Indians.

Not all Indians welcomed the Mormons. In 1858, Fort Lehmi, a Mormon mission in Idaho, was attacked by a war party of about 200 Bannock and Shoshone warriors. Two of the Mormons were killed and five were wounded. The Indians captured 250 cattle and 29 horses. As a result of the attack, the mission was abandoned.

In 1873 Mormon missionaries under the leadership of George Washington Hill traveled to southern Idaho where they baptized about 100 Shoshone and Bannock. Speaking to the Indians in their own language, Hill told them about the Book of Mormon and depicted its story by placing pictures on a scroll. The baptized Indians were then settled on farmland near Brigham City, Utah. The Indians named the new community Washakie, after a Shoshone Chief.

In 1875, Shoshone chief Pocatello traveled to Salt Lake City where he demanded to be baptized by the Mormons. In addition to Pocatello, five other Shoshone men and four Shoshone women are baptized. Pocatello predicted that many more would follow seeking spiritual salvation.

In 1875, a Mormon missionary gathered a number of Shoshone on a spot between Malad and the Bear River in Idaho. They put in 140 acres of corn, wheat, and potatoes. The missionary then began a series of evangelical meetings which resulted in 574 baptisms.

When the military commander ordered the Indians to return to the reservation, they were on their second day of harvest. As a result, most of the crops which they had planted were lost.  Following this incident, the Deseret News reported:

Undeterred by the military breakup of his Indian farm, the Mormon missionary established another farm for the Shoshone between the Bear and Malad Rivers. With the help of other Mormon missionaries, a dam was constructed and work on an irrigation system was started. Eighty acres were planted which the Indians harvested with their own reaper.

In 1880, a Mormon missionary went to the Wind River Reservation in Wyoming to work among the Shoshone. When he asked his old friend Chief Washakie for protection against the Gentile Indian agents, he was told that Washakie was not interested in talking with him nor was he interested in learning more about Mormonism. Washakie explained that Mormonism was an invented story, but also confessed that the Mormons had always been his friends. After a discussion with Washakie, the Mormons received permission to tell the Shoshone about the Book of Mormon.

The Mormon missionary, Amos Wright, explained to the Shoshone the contents of the Book of Mormon, their relationship to the Lamanites, and the promises that God made to them. Wright spoke to them in broken Shoshone, but in spite of this his talk made such an impact upon those assembled that 87 requested baptism. Washakie and 17 of his family members converted. Wright baptized 422 Shoshone during a four-week time period.

Lawrence Coates (1972: 7) writes: “Wright’s success rested partly upon the Shoshonis’ long tradition of accepting dreams and visions as being divine manifestations. To them, the visions described by Wright could easily fit into their religious beliefs.”

In 1882, John Taylor, the president of the Mormon Church, received divine instructions for the church to renew its determination to educate and convert Native Americans. Assignments were made to various apostles to supervise the work among the Indian nations.

In 1883, the Indian agent for the Fort Hall Reservation in Idaho estimated that 300 Bannock and Shoshone were now members of the Mormon Church. He asked the Commissioner of Indian Affairs for help in stopping the Mormons from instructing the Indians in polygamy and other “vile doctrines.”

“We know there are difficulties in reaching the Indian but this must not be an excuse in our neglecting to teach them.”

The Mormon missionaries were successful among the Shoshone for a number of reasons. While most missionaries sought to convert them on behalf of the United States government, the Mormon religion, like the Native American religions, was suppressed by the government. Thus Indians felt a sense of kinship with the Mormons.

The Mormons, like the Indians, were also persecuted because of their practice of polygyny. This contributed to a sense of similarity with the Mormons.

Third, the Indians viewed Mormon doctrine as similar to theirs with its origins in a vision. And the Mormons told the Indians the story of the Book of Mormon in their own language rather than requiring the Indians to learn English. Unlike other forms of Christianity, Indians are included in the religious stories.

And finally, unlike many of the other missionaries which Indians encountered, the Mormons seemed to be genuinely interested in helping them, not only spiritually, but also with regard to their economic well-being.

Mormons and Indians in Early Utah

The Mi’kmaq and French Missionaries

Mormon Missionaries and the Hopi Indians