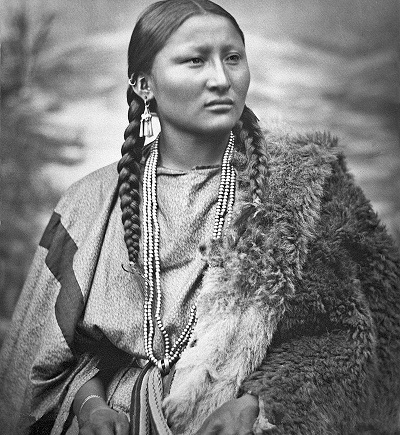 In 1831, when the Sauk returned to their traditional village of Saukenuk in Illinois, the Americans called up a force of 700 militia volunteers to protect the citizens of the state from the Sauk invasion. The Sauk were determined to remain peaceful and met in council with the Americans. The Americans wanted the Sauk to move to new lands west of the Mississippi River. Black Hawk informed General Gaines that the women own the fields, not the men. The Sauk then selected a woman to speak for them. She told the Americans that the women owned the fields, not the tribe, and that the women had never sold any of the land nor consented to the transfer of it to the United States. Gaines simply dismissed her comments saying that the President did not send him to make treaties with women nor to hold council with them.

Some of the Indian women leaders which have been recorded by the Europeans are briefly described below.

In 1656, Anne, also known as Queen Anne, assumed leadership of the Pamunkey in Virginia, a tribe which was a part of the Powhatan Confederacy.

In 1674, Awashonks became the sachem of the Saconnet band of the Wampanoag in Massachusetts.

In 1760, Spanish priest Gaspár José de Solís encountered a Caddo village in Texas, which was governed by a woman whom he calls Santa Adiva. He reported that she was married to five men, lived in a large house, and that people from other Caddo villages brought gifts to her.

In 1785, Toypurina (Gabrielino) convinced Indians from six California villages to participate in a revolt against the San Gabriel Mission. Toypurina was a medicine woman who was considered to have killed people with her magic, but the priests and soldiers had been warned and the insurgents were arrested. At her trial, Toypurina denounced the Spanish for trespassing on and destroying Indian lands. Most of the Indians were sentenced to 20 lashes and Toypurina was deported to the San Carlos Mission.

In the 1780s, Net-no-kwa was an Ottawa who was living among the Ojibwa. She was acknowledged as a powerful traditional leader. Her hunting dreams gave her the power to help her people find food during times of scarcity. She was also a participant in the Midewiwin Society (a formal, religious and healing society) which enhanced her authority.

In the late 1700s, Blue Robed Cloud, Ojibwa, was a spiritual leader who had received great power from a vision during her first menstrual vision quest. This power was used to help male hunters in finding game.

In 1809 Kauxuma-nupika (“Gone to the Spirits”), a Kootenai woman who had been married to a non-Indian for a year, returned to her people in Montana and British Columbia and announced that she had been transformed into a man. He/she claimed to have acquired great spiritual power, including the power to foretell the coming of diseases. Kauxuma-nupika became both a spiritual and political leader and was acknowledged as a chief by the non-Indian traders.