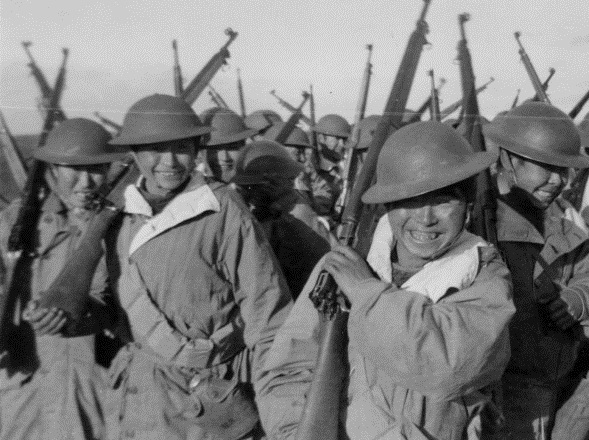 In World War I, American Indians had to register for the draft even though they were not eligible to be drafted since they were not citizens. By the beginnings of World War II, however, American Indians had had citizenship conferred on them twice by Congress: once in 1924 and again in 1940. The Nationality Act, passed by Congress in 1940, not only conferred citizenship on American Indians (even though they had be granted citizenship in 1924), but required that Indian men register for the draft. Passage of the Act was opposed by the Indian Defense League of America. Tuscarora leader Clinton Rickard urged those who wished to volunteer for the armed services do so as alien non-residents.

There were a number of concerns, controversies, and conflicts regarding the draft and American Indians.

At the Tohono O’Odham village of Toapit in Arizona, 30 men under the leadership of Pia Machita refused to register for the draft in 1904. Marshalls and Indian police attempted to arrest the leader, but they were roughed up and forced to release the 84 year old Machita. The Tohono O’Odham escaped into the desert.

“any organization or group that would deprive a people of as sacred a right as the right of suffrage would not hesitate to deprive them of other constitutional rights including the three inalienable rights – life, liberty, and the pursuit of happiness, if the opportunity to do so presents itself.”

The draft board in Gallup, New Mexico decided that non-English speaking Navajo were not eligible to be drafted. Tribal leaders objected to the ruling because many Navajo wanted to serve.

In Arizona, six Hopi men were arrested for not registering for the draft. The Hopi claimed that registration was against their religious traditions, but a federal judge ruled that these traditions did not have any bearing on draft registration. The Hopi men were sentenced to a year and a day in a prison camp.

In 1941, Warren Green, an Onondaga, was drafted by the Army. His mother petitioned the court for a writ of habeas corpus ordering her son to be discharged because he was not a citizen. While the Iroquois (of which the Onondaga was a member) felt that the Citizenship Act should not apply to them, the courts disagreed.

In Florida, several Seminole men refused to register for the draft claiming that they were not Americans but were citizens of the Seminole Nation.

The Richmond, Virginia draft board ordered three Rappahannock tribal members to report to a black induction station. The Indians refused to go claiming that they were Indians and should be inducted into non-segregated units. The tribe is not recognized by the federal government and so the Bureau of Indian affairs did not support them. The federal court found the three guilty of violating the Selective Service Act and sentenced them to six months in prison.

Six North Carolina Cherokee refused to report for military induction as Negroes. The U.S. District court supported the Indians, overturning the local draft board’s decision and allowing them to join the army as Indians in integrated units.