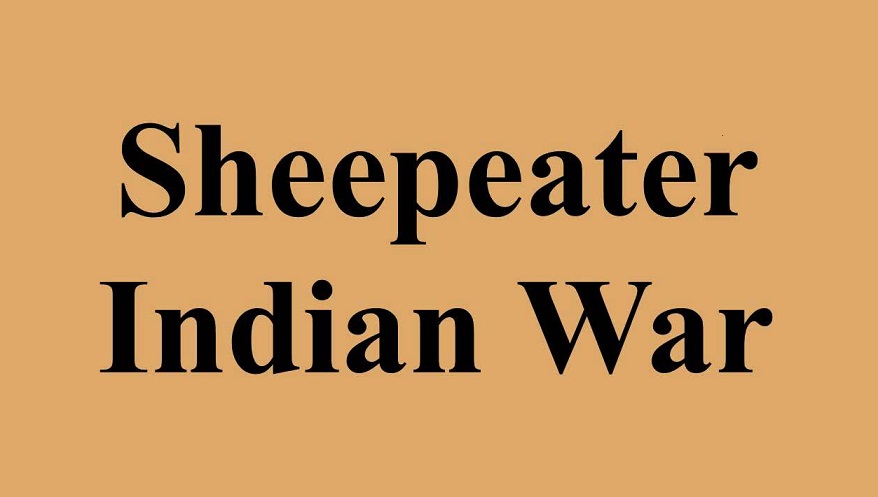 It is not uncommon for Indian tribes to be named for the food they consume. One group of Shoshone living in the mountains between Idaho and Montana were called Sheepeaters because mountain sheep were the mainstay of their food supply. In 1879, the deaths of five Chinese miners was attributed to the Sheepeaters, even though the murders appeared to have been committed by a party of Americans disguised as Indians. This marked the beginning of the Sheepeater War.

General O. O. Howard was prompted to investigate these deaths. He had already been wanting to subdue what was said to be the last holdout of hostiles from the Bannock War along the Middle Fork of the Salmon River. This gave him the excuse he needed.

In the first battle of the war, the army destroyed an Indian camp which had been abandoned about two hours earlier. Then, ignoring the findings of its scouts, the army followed a trail down the creek into a steep canyon. About two dozen Sheepeater warriors were waiting and the army unit was ambushed. Two soldiers were wounded. In a disorganized and hasty way, the soldiers retreated. The victorious Indians made no immediate effort to press their advantage by pursuing the fleeing troops.

The following morning, the Indians set fire to the base of the mountain and the winds carried the flames uphill toward the army camp. With shifting winds and carefully set backfires, the army escaped the flames and when darkness set in they were able to sneak past the Indians. The army lost 21 pack animals and all of their supplies to the Sheepeaters.

In the second battle of the war, Umatilla scouts led the army to a Sheepeater camp which had been hastily abandoned. There was an exchange of gunfire, but no casualties. The Sheepeaters lost a large cache of supplies, including goods which they had captured in their earlier battle with the army.

Several army companies spent four months battling a band of 51 people, which included only 15 warriors who had only 8 firearms: 4 carbines, 2 muzzle-loading rifles, 1 breech-loading rifle, and 1 double-barreled shotgun. In the end, the band surrendered after being pursued by the Army’s Umatilla and Cayuse scouts.