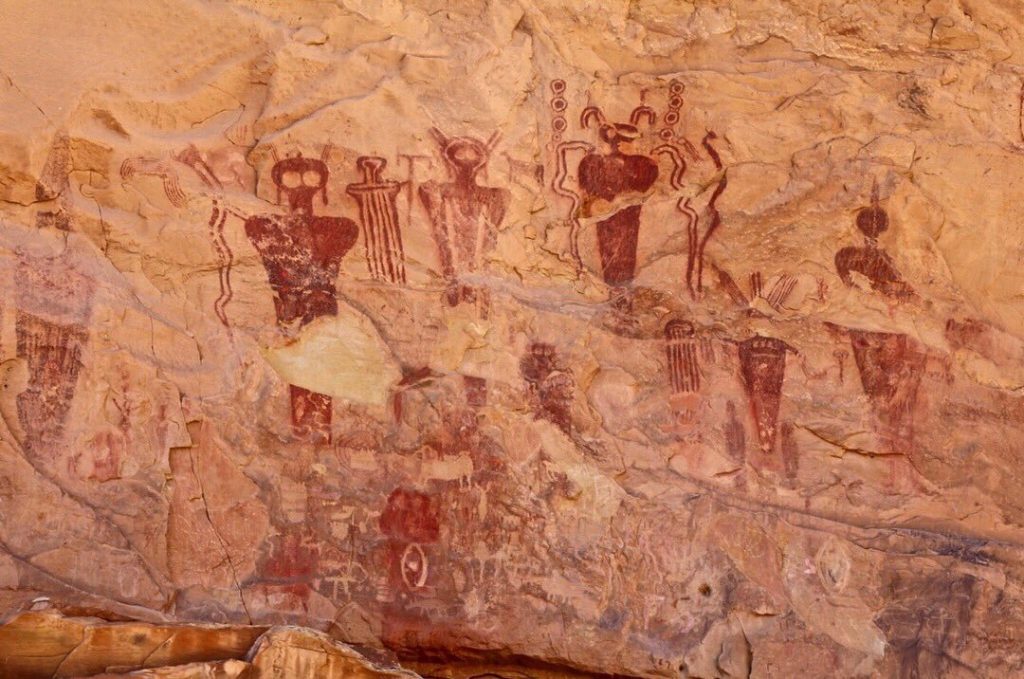 Ten thousand years ago, Native American people in what is now Utah had a lifeway that was centered around a pattern of seasonal wandering, the hunting of animals, and the gathering of plants. Human habitations at this time tended to cluster around lakes. Native American groups were surviving and prospering in an austere environment because they had an intimate knowledge of the land and its resources.

The people during this time which archaeologists call the Archaic Period (10,000 years ago to 1,500 years ago) were gathering a variety of seeds and nuts (including grass seeds, pickleweed, and bulrush). Seeds were collected in tremendous numbers using baskets of various kinds and were processed into flour with milling stones.

The people were also hunting both small and large animals, including mountain sheep, deer, antelope, rabbits, and ground squirrels.

The archaeological evidence of the human habitation in Utah during the Archaic Period comes primarily from caves and rockshelters. This does not necessarily mean that these were used as their primary homes, but rather the preservation of materials was better in these locations and thus the archaeologists are more likely to find evidence here.

Some of the earliest evidence of Native Americans in Utah comes from Danger Cave. Archaeological evidence shows that American Indians were camping here by 9000 BCE. They were lighting fires on the cave’s sandy floor and leaving a scattering of stone flakes and milling stones.

By 7500 BCE, the Utah Native Americans were engaged in a roving pattern of hunting and gathering and occupying settlements seasonally. Some of the plant foods being used by the people at this time included seeds from pickleweed. They were also hunting big game animals including  deer, pronghorn antelope, mountain sheep, elk, and buffalo. They were trapping small game, such as rabbit, with netting.

Indian people were occupying Old Man Cave by 6900 BCE. The plants being used by the people at this site included prickly pear, sand dropseed, marshelder, sunflower, and goosefoot. Indian rice grass was also an important food.

In 6350 BCE, Indian people began to use Hogup Cave as a base camp. Here they gathered plants for food, fuel, and for making baskets and mats. They also hunted waterfowl, small mammals, and larger mammals. The larger mammals included pronghorn antelope, mule deer, mountain sheep, and bison.

Among the artifacts left at Hogup Cave were engraved pebbles. Archaeologists are somewhat puzzled about the use of the odd little stone slabs and pebbles. They were neatly engraved with some tough stone tool, the simple designs being cut rather carefully in any of several geometric patterns.

By 6000 BCE, Indian people were occupying the Sudden Shelter located in Ivie Creek Canyon. Hunting was the major activity carried out by the people who occupied this site. Sudden Shelter was a base camp from which the people were able to exploit a wide variety of resources. One of the main animals being hunted was the mule deer.

By 5000 BCE, Indian people were occupying the Deluge Shelter on Jones Hole Creek. The people at this site were hunting mule deer.

By 4300 BCE, the Indian people who occupied Sudden Shelter had changed their patterns of resource exploitation. They were now using slab-lined fire pits and milling stones indicating that plant resources had become more important. The most heavily utilized plant resource at this time was goosefoot. At this time Sudden Shelter was occupied primarily between April and September.

About 4000 BCE, there was a dramatic increase in the number of sites occupied by Indian people. There was a broadening of settlement patterns with an increased emphasis on the exploitation of resources in the upland zones.

At this same time, Indian people were using Spotten Cave at the south end of Utah Valley. Spotten Cave was used as a temporary stopover as the people moved from the Goshen Valley bottoms to the uplands of Long Ridge or the Wasatch Front.

In 2220 BCE, Indian people began to occupy Thorne Cave in the Uinta Basin. They were hunting jackrabbit, cottontail, antelope, beaver, and bighorn sheep.

The Archaic Period in Utah ends with the emergence of the Fremont people in 1500 BCE.