The Northern Plains Indian medicine bundle is simply a collection of objects which symbolize a spiritual path. The use and nature of these bundles varies greatly among the various Indian Nations of the Northern Plains. In addition, some of the bundles are owned by individuals and are symbols of their individual spiritual paths, while others are owned by the tribes or tribal associations and are associated with the spiritual well-being of the larger group. In this diary, we are going to look at the personal medicine bundles. 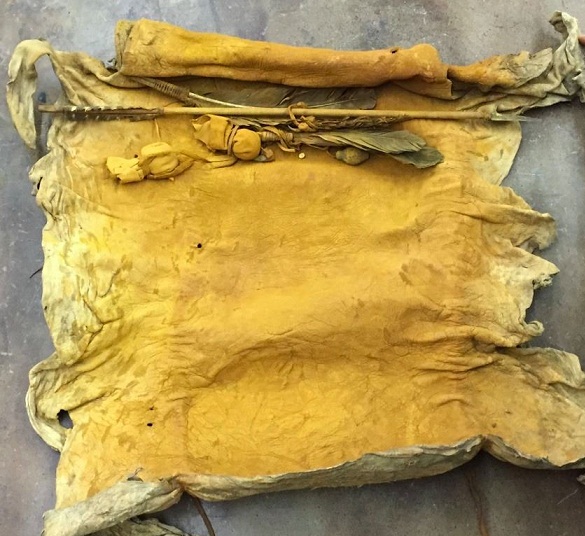 The personal medicine bundle is made in accordance with instructions received from spiritual helpers during the vision quest. The sacred contents of the bundle are symbols of power: they are not the spiritual power itself. Thus, if a personal medicine bundle is lost or stolen, the power is not lost as the individual has the power to remake the bundle.

With regard to the Crow, the initial power of the medicine bundle traditionally comes from a vision. The medicine bundle is therefore grounded in individual revelations. The spirituality of the bundle involves not only the assembly of the materials which it contains, but also the rituals of displaying these materials and the responsibility of bundle ownership. The function of the bundle is to care for general well-being and to prevent misfortune.

One example of the contents of a bundle and the symbolism of the objects within the bundle can be seen in the bundle of the Crow warrior Half Yellow Face. The main object in the medicine bundle was a flute painted with yellow lines. Carved into the flute were an elk’s head and a bighorn sheep’s head. Attached to the flute were curlew and red woodpecker feathers. An eagle feather hung from one end. Half Yellow Face did not put this bundle together but received it from another Crow warrior, Cold Face. The power in the bundle had been originally given by the Great Above Person to Cold Wind through the elk. Cold Wind had received the vision for the bundle while fasting on a high mountain top near the Stillwater River. Thus the symbolism of the elk and the bighorn sheep represent this original vision. The power of the bundle helped to protect Half Yellow Face in war and to find his enemies. The bundle also contained love medicine.

After the death of Crow medicine man Braided Tail, his skull was added to his bundle. In this way the bundle became an oracle to its owners. The bundle would tell its owners about the enemy-their location and the outcome of raids-as well as where to find game. The bundle could tell if a sick person would be cured and it could tell the location of missing property.

One object found in many medicine bundles is the Buffalo Stone. Buffalo Stones are small stones containing strong medicine which are found on the prairie. This stone is generally a fossil of some kind, and the stone itself takes the initiative in contacting humans and offering itself as a helper. For the Blackfoot, the stone will call out to the individual with a faint chirp. Traditionally, these stones gave the Blackfoot hunters great power in hunting buffalo.

Among the Mandan, there are personal medicine bundles which are owned by both men and women. These personal bundles were assembled as tangible evidence of visionary contact with a specific spirit. If this spiritual power was deemed inadequate a bundle might be disposed of and another vision sought. Each bundle has its own sacred songs and rituals associated with its opening. The Mandan ceremonial bundle is a collection of objects which serve as aids in remembering the sequence and content of the origin stories.  Bundles owned by women are often associated with healing.

Among the Mandan, personal bundles are passed down from generation to generation in a matrilineal fashion. Thus, a man may inherit a bundle from his mother’s relatives, but not from his father. Before inheriting a bundle, however, a man has to show that he is worthy of it. Traditionally, this was done by giving feasts to the bundle at various times.

Among the Plains Cree, a vision might give an individual the ability to make a bundle containing war equipment to protect the wearer from wounds and other hazards. When bundle contents were worn in battle or for ceremonial occasions, a cloth had to be given to the bundle. When any bundle was opened, a pipe offering had to be made.

Among some tribes, such as the Blackfoot and the Crow, it is felt that the power of a medicine bundle can be transferred from one individual to another. Among the Crow, the owner of the bundle has the power to sell the bundle, along with its associated ceremonies, to someone else. The special talismans from a bundle can be sold three times and still retain the spiritual powers. In transferring the spiritual power of the medicine bundle, the original owner adopts the person wanting the bundle in a ceremonial process that began and ended with a sacred sweat lodge ceremony and prayer.

The Crow warrior Two Leggings explains why some men would buy a medicine bundle:

“Some of us bought powerful medicine bundles from well-known medicine men even if we had a vision of our own because we wanted their power and their sacred helpers.”

Among the Blackfoot, personal medicine bundles were assembled in accordance with personal visions. While the bundle originated with the owner’s vision, the owner could sell the bundle to another person. The songs and other knowledge associated with the bundle remained the personal possession of the individual until he was willing to transfer the bundle and the spiritual power which it represents to another.

No photographs of medicine bundles have been included here as most Native elders feel that it is improper to photograph the bundles and their contents. While there are many photographs of these bundles, it would be inappropriate and disrespectful to show them here.

Buffalo Hunting on the Northern Plains