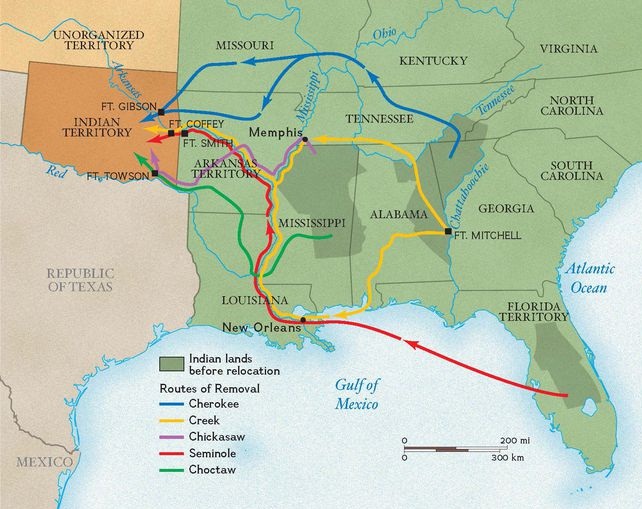 During the first part of the nineteenth century, the American policy was to remove Indians from east of the Mississippi River and to “give” them reservations in Indian Territory. While this idea had been proposed by President Thomas Jefferson, it was not enacted into law until 1830 with the passage of the Indian Removal Act. Under the terms of this act, Indian tribes were to be moved from Ohio and Mississippi valleys to the western plains. The primary argument in favor of Indian removal claimed that European Christian farmers could make more efficient use of the land than the Indian heathen hunters. This argument conveniently ignored the fact that Indians were efficient farmers and had been farming their land for many centuries.

Removal was essentially a racially motivated idea. In the nineteenth century, most Americans tended to view Indians in racial terms and ignored cultural differences. They viewed all Indians as the same. Unfortunately, many Americans in the twenty-first century hold this same view. Today there are still some historians, in their attempt to justify removal, who continue to portray Indians as hunters and as such, hindrances to the development of the land.

One of the voices of dissent in 1830 was that of New Jersey’s Senator Theodore Frelingbuysen who pointed out to the Senate that Europeans had found Indians:

In a series of newspaper essays intended to build public support for Indian removal, Baptist missionary Isaac McCoy claims that Indians are not sovereign nations and that Indians had not really been a party to the treaties in contractual terms. He also defends the doctrine of discovery which gives the European nations the ownership of North America. He wrote:

Indian agents were told to inform the tribes that if they delay their removal they will be responsible for all provisions and costs themselves. The rationale for removal, rather than “civilizing” the Indians in their homelands, was explained in one letter to the Cherokee agent:

“An Almighty hand has stamped upon every creature a particular genius, propensity and leading traits of character. The polish of education may improve, but cannot change, for the imperishable seal is there; bars and dungeons, penitentiaries and death itself, have been found insufficient, even in civilized society, to restrain man from crime, and constrain him to the necessity of moral and virtuous action. How then are we to look for, or expect it, in a community made up of savage and illiterate people?”

It is interesting to note that at this time the Cherokee have a higher literacy rate than do the Americans. However, the Cherokees were literate in Cherokee which in the minds of the Americans didn’t count as literacy.

With regard to the passage of the Indian Removal Act, President Jackson said:

“It gives me pleasure to announce to Congress that the benevolent policy of the Government, steadily pursued for nearly thirty years, in relation to the removal of the Indians beyond the white settlements is approaching to a happy consummation.”

The President went on to say:

“It will relieve the whole State of Mississippi and the western part of Alabama of Indian occupancy; and enable those States to advance rapidly in population, wealth, and power. It will separate the Indians from immediate contact with settlements of whites; free them from the power of the States; enable them to pursue happiness in their own way and under their own rude institutions; will retard the progress of decay, which is lessening their numbers, and perhaps cause them gradually, under the protection of the Government and through the influence of good counsels, to cast off their savage habits and become an interesting, civilized, and Christian community.”

Jackson was not one to let the facts interfere with political goals. He exploited an enduring stereotype to push the Indian Removal Act through Congress.

The actual physical removal of the Indians, often carried out under military force and brutality, turned out to be one of the most shameful periods of American history.