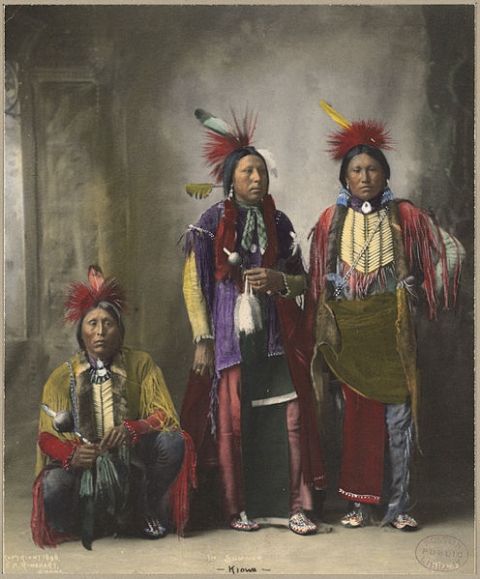 The Southern Plains is an area of rolling prairie grasslands with timbered areas along stream valleys. It lies south of the Arkansas River valley. It includes Oklahoma, Arkansas, portions of Texas, the eastern foothills of New Mexico, and portions of Louisiana. The Southern Plains were occupied by hunting and gathering tribes such as the Comanche, Kiowa, and Lipan Apache, and by agricultural tribes such as the Caddo.

Kiowa oral tradition tells of a time when they lived far to the north, beyond the territory of the Crow and the Lakota in the Northern Plains. It was a country that was very cold most of the year. This was a time when they used dogs to carry their burdens as they did not know of the horse. In was in the north that the Kiowa made close and lasting friendships with the Sarsi, the Crow, and the Arikara. It was here that they first encountered the Plains Apache (also known as the Kiowa-Apache).

In the 1600s, the Kiowa were living in the Yellowstone River area of the Northern Plains with the Crow. Their oral tradition describes the geysers in Yellowstone National Park as being a part of their original land. From the Crow they borrowed the taime or Sun Dance medicine.

The Kiowa then migrated to the Black Hills area of South Dakota where they were later expelled by the Lakota and Cheyenne. Finally, they migrated into the Southern Plains area. The presence of shield-bearing warriors in the rock art of central Montana and the Black Hills provides some evidence of this migration.

According to the oral tradition, one of the Kiowa warriors went far to the south where he was captured by the Comanche. The Comanche treated him well and gave him a horse so that he might return home with honor. Upon returning home, he told of the tribe of a land stocked with game where the summer lasted nearly all of the year. The council decided to follow the man back to the country he had seen and the following spring they began their migration south. They traveled south until they were attacked by the Comanche.

Kiowa oral tradition also tells of two rival chiefs who got into an argument and thus the tribe split up: one group moved east to settle with the Crow while the second group remained in the mountains. A long time later, the “Cold People” reunited with the Kiowa.

The Kiowa Gourd Dance (Tdiepeigah) honors the battles of the Kiowa warriors during their migration from the Northern Plains to the Southern Plains. This Kiowa ceremony began as a spiritual gift from the red wolf to a Kiowa warrior who was separated from his war party.

With regard to language, Kiowa is a part of the Tanoan family whose other branches are spoken in the Pueblos of Taos, Jemez, Isleta, and San Ildefonso in New Mexico. This suggests the possibility that the Kiowa may once have been sedentary horticulturalists who entered the Plains from the southwest.  Small bands of Tewa-speakers may have migrated to the Northern Plains long before European contact. It was here that they made the transition from elk and deer hunting to buffalo hunting. In the Northern Plains these bands underwent social and political reorganization which ultimately resulted in the formation of Kiowa nation.

Like other Southern Plains tribes, the Kiowa had an annual round which centered in part on buffalo hunting. The Kiowa would form fairly large winter camps which were located along streams where there was firewood and shelter from the winter storms. In early spring, when food supplies were low, the camp would break up into several smaller bands which would scatter in search of game. Later in the summer, the bands would come back together for the buffalo hunt.

After the acquisition of the horse, the tribes of the southern plains began using the tipi. Since the horse is considerably larger than the dog, this meant that longer tipi poles could be carried. Among the Osage the tipi was constructed on a framework of 13 poles which were about 18 feet long. This allowed for a lodge about 15 feet in diameter. The frame was covered with buffalo hides which had been sewn to fit the frame. Two women could set up a tipi in about 15 minutes.

Kiowa men would wear buffalo robes to cover the upper part of the body. The tanned side of these robes was often painted in a sunburst design. Women’s dresses would be decorated with a simple beaded band across the shoulders.

As with other Southern Plains tribes, it was considered normal to be married and ideally all adults were married. If a man’s wife died, her family would provide him with one of her sisters as a wife. The “sister” could be a “cousin” according to the European way of describing relatives. Similarly, when a man died, his brother would be obliged to marry the widow and provide for her children.

Children were named shortly after birth by a grandparent or some other relative. Names usually referred to some incident or to a great deed by an ancestor. Later in life, new names could be adopted as the result of a vision or because of warfare or hunting.

Among the Kiowa, the basic social unit was composed of a group of brothers, their wives and children. These kinship groups were then loosely organized into a variable number of bands under the leadership of a chief or headman who was spoken of as “father”. Bands ranged in size from about 20 individuals to over 60, with the typical band having about 35 people.

People were attracted to a Kiowa band because of the generosity of the chief. Wealthy leaders attracted sons-in-law, poor relatives, and individuals who had no kin. Chiefs who were not generous and who failed to maintain internal peace soon found themselves without a band. The primary functions of the chief involved the directing of the band’s hunting activities and the maintenance of internal peace. The chief usually decided when and where to move.

The Kiowa tribe existed as a sense of common identity and in reality the tribe came together only once a year (sometimes less) for the Sun Dance. In Kiowa tradition there were seven autonomous tribal divisions, each composed of several bands: Biters, Elks, Kiowa proper, Big Shields, Thieves, Pulling Up, and Black Boys. During the annual encampment these divisions occupied set places in the camp circle. Each of these divisions had a head chief who was selected on the basis of ability (the position was not inherited) and there was a nominal chief for the entire tribe.

The Kiowa recognized about twelve different deeds of valor during war. When a man had performed four of these deeds he was acknowledged as a warrior.

Kiowa religion is based on a sacred power (dwdw), a force that permeated the universe and could be found in spirits, objects, places, or natural phenomena. This spiritual power is neither good nor bad, but it can help or harm depending on the user. Among the Kiowa, however, there was a hierarchy of spiritual power or dwdw: predators are more powerful than their prey; spiritual powers from above, such as the sun, are stronger than the earthly animals.

Only a handful of men who had successfully supplicated the spiritual forces during vision quests acquire dwdw. It was, however, possible to purchase dwdw by becoming an apprentice to men of power, but power obtained through the vision quest was always stronger. In purchasing dwdw, the individual had to undergo the vision quest under the tutelage of a man of power.

Among the Kiowa, the ten sacred medicine bundles – the Ten Grandmothers – were very important. One of the functions of the medicine bundle priests was to adjudicate disputes. Sacrifices, vows, and petitions were traditionally made before these ten bundles during crucial periods of a man’s life. A man might ask the bundles for success in war. The bundles also had the power to cure the sick. Anyone in the tribe could make gifts to a bundle and to pray for it.

The eleventh tribal bundle among the Kiowa is the Taime or Sun Dance bundle which became the focal point of the Sun Dance. This bundle would be placed at the western side of the Sun Dance lodge where it symbolized the sun, and mediated between the people and sun power.

The keeper of the Taime would select the location for the Sun Dance and was the nominal head of the tribe during this ceremony. The Kiowa Sun Dance centered on the sun as the creator and the regenerator of life through the Taime.