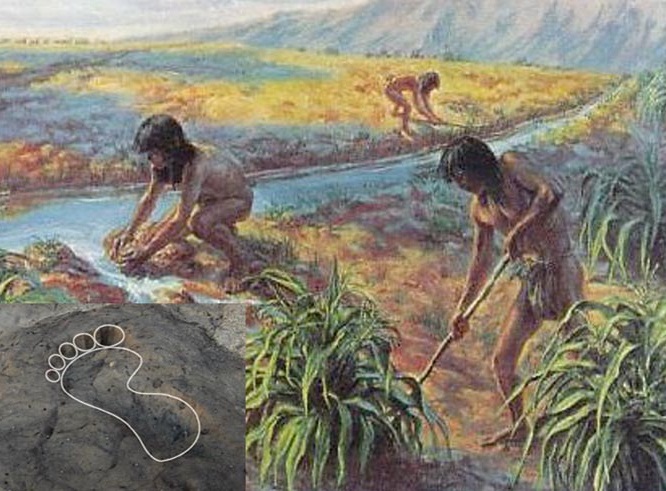 Three thousand years ago-about 1000 BCE-there was a lot going on around the world. Some examples:

Mesopotamia: Babylon was in decline

Greece: Greece was beginning a period which would later be known as the Dark Ages characterized by the loss of Mycenaean writing

Rome: there was no city of Rome:only seven hills with a few hamlets

South Asia: the Aryans were settling on the plain of the Ganges River

China: the Zhou dynasty was in its first century of rule

Middle East:  the Hebrew tribes were uniting under the leadership of Saul

Europe:  the Celtic migrations were beginning

Mesoamerica:  the Mayans were draining swamps to create new farmlands

North America: American Indians by this time had developed many diverse cultures. What follows is a brief overview, based on archaeological findings, of some of the things that were happening in North America around 1000 BCE.

In the Eastern Woodlands part of the United States, Indian people began making subsistence changes as well as other cultural changes which resulted in what archaeologists call the Woodland Tradition.

In New York and New England, a pottery style which archaeologists call Vinette I appeared about this time. The Vinette pots had conoidal bottoms. They were tempered with grit, and were beaten, inside and out, with cord-wrapped wooden paddles.

In New England, trade and exchange routes expanded during this time, particularly to the west. New England’s Indians began to acquire objects which show styles which were common in New York. In Connecticut and Rhode Island, weapon points and ceramic pots show trade with people to the southwest along the coastal plain.  Archaeologists have found that ceramic pots replace the older carved soapstone vessels during this time.

In New Jersey, two distinct pottery traditions appeared. One involved tub-shaped, flat-bottomed pots while the other is characterized by simple conoidal, ovate, or baglike forms. While archaeologists find the appearance of two distinctly different forms of ceramics to be puzzling, it may be that the people were useing pottery as a medium to replace containers, such as tubs and baskets, which had been made with other materials.

In Rhode Island, Indian people in the Potowomut River and Greenwich Cove area were engaged in the intensive exploitation of shellfish. The people were living next to a saltwater estuary.

In Ohio, Indian people at the Danbury site on a Lake Erie beach were now using pottery that was marked with cord impressions. These impressions either served as decorative elements or they made the pots easier to grip. The Danbury site was used primarily as a fishing site during warm weather.

In Michigan, Indian people began burying their dead at the Riverside site.  Burial goods suggest that the people had well-developed trade networks with the Ohio River Valley, the Gulf Coast, and the Great Plains. Included in the graves were obsidian from the Yellowstone National Park area of Wyoming, marine shells from the Gulf or Atlantic seacoast, flint from North Dakota, and stone tools from other parts of the Midwest.

In the Midwest, Early Woodland people were using tubular-shaped pipes for smoking tobacco. The pipes were flared on the tobacco end and narrowed on the mouth end.

In California, the Indian people living in the Channel Islands were now using elaborate circular and bi-prong fishhooks made from shells. The development of this improved fishing technologies coincided with a decrease in the availability of shellfish, which had been their staple food. The development of better fishing technologies enabled these people to catch larger fish, some of them far off shore.

In the Martis Valley near Truckee, California, Indian people were doing high-elevation seasonal hunting and seed-gathering. These people were probably the ancestors to the Maidu.

In California, Tataviam began to be differentiated from the other Takic languages. The Takic-speaking people at this time were cremating their dead.

Indian people whose cultures were adapted to living in desert climates began moving from Arizona into the California desert regions. These were probably Yuman-speaking people.

Indian people began carving petroglyphs in the Central Sierra area which were characterized by the near absence of human and animal representations. Most frequent were the circle and dot forms. The rock art sites were often associated with game trails and seem to be part of the magico-religious aspect of big-game hunting.

On the Northwest Coast, Nootka and Kwakiutl had diverged into two distinct language groups.

In Alaska, the Old Whaling Culture was now present at the site of Cape Krusentern on the Bering Sea. The people were living in semi-subterranean houses and hunting whales. The culture was related to that found in Russia’s Chukotka Peninsula.

At Hidden Falls in southeastern Alaska, Indian people were living in pole shelters. They were gathering shellfish, including bay mussels, littlenecks, and butter clams. They were fishing for Pacific gray cod, salmon, rockfish, herring, and halibut. They were hunting deer, sea otter, and harbor seal. They had dogs living with them.

In Idaho, Indian people were operating nine high-elevation quarries near the Warm Springs Creek to obtain ignimbrite for the manufacture of bi-face blanks for projective points and knives.

Along the Middle Snake River in Idaho, hunting began to be more important.

In Montana, the Kootenai were hunting mountain sheep high in the mountains of what is now Glacier National Park. The Kootenai were also quarrying chert for making stone tools about 3 miles upstream on Bowman Creek from its confluence with the North Fork of the Flathead River.

In Utah, Indian artists were creating pictographs at the Buckhorn Wash site.

In New Mexico, Indian people were now using the Hill Rolls Cave in the Sacramento Hills as shelter during the spring and summer. They were hunting rabbit, deer, and pronghorn. They were harvesting at least two varieties of domesticated corn. Abalone shell from the Pacific Ocean was being used as jewelry.

In New Mexico, Ancestral Puebloans, called Basketmaker II by archaeologists, were growing squash and corn. While corn was important to their subsistence, they had not developed a fully sedentary way of life.

In Florida, Indian people in the St. Johns River area were making pottery. They were using freshwater sponge spicules in the pottery paste which results in a chalky feel. These sponge spicules were an intentional temper which was added during the manufacturing process. The pottery was made with a coiled technique.

In the western Tennessee River valley of northern Alabama and west Tennessee, Indian people were making flat-bottomed, wide-mouthed beakers, and plain simple bowls. This fiber-tempered pottery is known as the Wheeler series.

The people of Poverty Point, Louisiana stop building mounds and appear to leave the area.

Ancient America: Colorado Prior to 6000 BCE