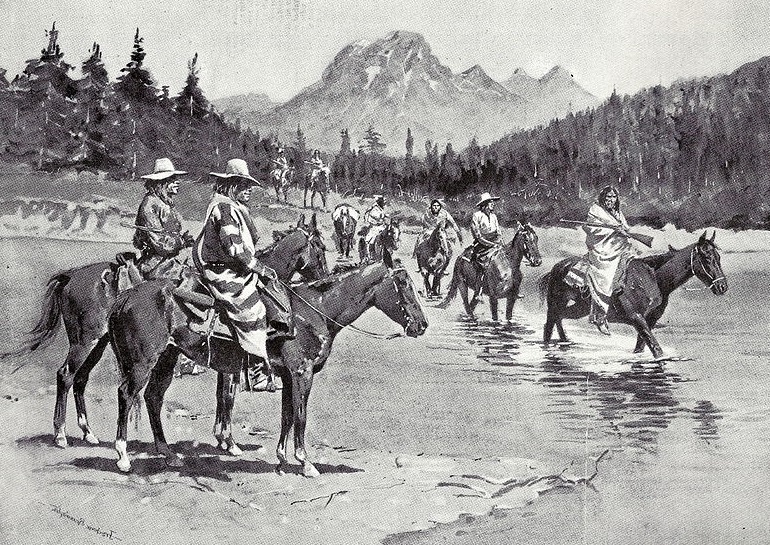 A casual reading of almost any book on American history—from popular accounts to textbooks to scholarly tomes—reveals that there have been a lot of conflicts or wars with American Indians since the creation of the United States. In 1907, the War Department officially enumerated 1,470 incidents of military action against American Indians between 1776 and 1907. This suggests that there was about one military action per month against Indians during the first 131 years of the nation’s existence. This count does not include a number incidents or wars involving state militias and volunteer groups, such as vigilantes. In some instances, the military action was a single battle, in others there were a series of battles.

According to the War Department, only two of these military actions have the formal status of “war” under U.S. Army terminology: the 1877 Nez Perce War and the 1878 Bannock Indian War. Of the two “official” wars delineated by the War Department in 1907, the 1878 Bannock War is probably the least known. The Bannock are a Great Basin tribe which migrated from the desert areas of southeastern Oregon to the more propitious and well-watered region found at the confluence of the Portneuf and Blackfoot streams with the Snake River in present-day Idaho. When the Bannock moved into the Snake and Lemhi River valleys and the Bridger Basin, they came into close contact with the Shoshone, a group which is linguistically and culturally related. The Bannock language belongs to a branch of the Uto-Aztecan family known as Western Numic while Shoshone is Central Numic. Bannock culture tended to emphasize war more than Shoshone culture.

The Bannock call themselves Bana’kwut (“Water People”), and they often were called Buffalo Eaters and Honey Eaters by other tribes.

The Bannock War was about camas:  Camassia quamash, a plant with a blue or purple flower which has a nutritious bulb about the size and shape of a tulip bulb. For many of the tribes in Idaho, Eastern Washington, Eastern Oregon, and Western Montana, camas was a major food item. It was gathered in late spring or early fall. It was either eaten raw or steamed in a pit for immediate consumption. If the camas was to be preserved, the camas bulbs were pounded in a mortar to make a kind of dough. The dough was then shaped into loaves, wrapped in grass, and steamed again. After the second cooking, the loaves were made into smaller cakes and dried in the sun. Without stores of camas, people would be ill prepared for the cold months of the year.

In Idaho, one of the most important camas areas was known as Camas Prairie.

In 1867 the Bannock met in treaty council with the American government at Long Creek. The Americans wanted to confine the Bannock as well as the Shoshone to a reservation so that the land could be opened for American settlement. In the discussions about the reservation, Chief Taghee told the Americans:

“I want the right to camp and dig roots on Camas prairie, when coming to Boise to trade.”

At this time, popular opinion among non-Indians in Idaho called for the extermination of all Indians. An editorial in the Idaho Statesman advocated that the military continue to kill Indians. According to the editor:

“This would be our plan of establishing friendship on an eternal basis with our Indians: Let all the hostile bands of Idaho Territory be called in (they will not be caught in any other manner) to attend a grand treaty; plenty of blankets and nice little trinkets distributed among them; plenty of grub on hand; have a jolly time with them; then just before the big feast put strychnine in their meat and poison to death the last mother’s son of them.”

The following year, the Bannock and the Shoshone met in treaty council with the Americans at Fort Bridger, Wyoming. Once again the Bannock insisted that Camas Prairie be included in their reservation and article 2 of the treaty expressed this desire. However, instead of saying “Camas” Prairie, the wording of the treaty indicated “Kansas” Prairie.

In 1870, the American government, instead of establishing a separate reservation for the Bannock, assigned them to the Fort Hall Reservation which they were to share with the Shoshone. In moving to Fort Hall, the Bannock were to give up all rights to areas outside of the reservation, including Camas Prairie. Under military escort, the Bannock were moved to the reservation. The soldiers expressed little sympathy or concern for the Indians they were herding and some Indians were killed for slowing the procession down.

Life on the Fort Hall Reservation during the 1870s was not good for the Bannock and Shoshone. While the American government had promised to provide the Indians with rations as they made the transition from a hunting and gathering way of life to a more settled agricultural lifestyle, the promised food supplies were meager. Hunger was a regular part of life. By 1877, the Shoshone and Bannock were starving. To alleviate the hunger, the Indians once again travelled to Camas Prairie were they harvested camas to prepare for the coming winter.

The food shortages at the Fort Hall Reservation did not improve, and by 1878 the Indian agent felt that he had no choice but to encourage the Indians to hunt outside the reservation. Bannock chief Buffalo Horn visited the territorial governor and obtained permission to buy $2 worth of ammunition for deer hunting. With Indians hunting off the reservation, fears and rumors about Indian wars spread throughout the non-Indian settlements.

Once again the Bannock went to Camas Prairie to obtain the food they needed. They found that American settlers had turned their cattle loose in the area and so the Bannock insisted that the Americans remove the cattle. The Americans belligerently refused, insisting that the Indians had no rights to the land.

Buffalo Horn and a war party of 60 warriors were attacked by American volunteer troops. While the Indians killed two volunteers and wounded several others, Buffalo Horn was badly wounded. After several days travel, he asked to be left behind to die.

After Buffalo Horn’s death the war party went to Oregon. At the Malheur Reservation, Paiute Chief Winnemucca refused to join the war against the Americans and was taken prisoner. Sarah Winnemucca, his daughter, snuck into the camp and helped the chief and about 75 others to escape.

In Oregon, Oytes and Egan assumed leadership of the rebel group. Egan was initially a reluctant leader, but he was persuaded to become the war chief. Oytes was a Dreamer Prophet and this created problems for the Americans. Part of the reason for the Nez Perce War a year earlier was to eradicate the Dreamers—followers of the Washat Religion of the prophet Smohalla.

At this time, the regular army entered the picture. The army was headed by General O.O. Howard—America’s Christian general. Howard had fought against the Nez Perce and was strongly opposed to Smohalla and his Dreamer movement. He saw himself as a Christian warrior fighting against the forces of evil. Howard and his army were soon in pursuit of the rebel Indians.

At Silver Creek in Oregon, the Americans caught up with the war party and carried out a daring daylight attack with the scouts and some of the troops charging through the camp. Egan led a countercharge, but was wounded first in the wrist and then was shot in the breast and the groin. He was carried off by his warriors and Oytes assumed command. Though badly wounded, Egan directed a retreat and the war party crossed over into the John Day Valley with the army in pursuit.

The war party headed for the Umatilla Reservation hoping to enlist them in the war. Near the reservation, they engaged the army in a day-long battle in which five warriors were killed. The Umatilla under the leadership of Chief Umapine watched the battle from a hilltop. The next day, the Umatilla held council with the Americans. The Umatilla agreed to capture or kill Egan and in exchange tribal members were to be pardoned for their role in the war.

Egan regrouped his warriors in Oregon’s Blue Mountains and waited for the Umatilla to join him. A large party of Umatilla under the leadership of Umapine, Five Crows, and Yettinewitz, came into the camp to talk with Egan. The Umatillas then opened fire, killing Egan and 13 of his warriors. The Umatilla retreated with Egan’s scalp before his followers could react.

Following the death of Egan, the Bannock and Paiute broke into a number of smaller groups which were pursued by the troops. At Birch Creek, the Umatilla under Umapine surprised part of the fleeing war party. They killed 17 warriors and captured 25 women and children. One of the fallen warriors was reported to be Eagle Eye, the leader of the Weiser Shoshone. Eagle Eye was, however, still very much alive and had not been involved in the fight with the Umatilla.

One of the small raiding parties decided to make a run for Canada to join Sitting Bull and the Sioux. They followed the Bannock trail through Yellowstone National Park where they encountered a survey team. The Bannock managed to capture the survey crew’s animals and supplies.

The army, under the command of Col. Nelson Miles, was actually in Yellowstone National Park. They were not on active duty, but were there as tourists. They surprised a Bannock camp near Heart Mountain, killing 11 and capturing 31.

Southwest of Yellowstone Lake, the army met some of the escapees from the Heart Mountain battle. After a brief fight, the Indians surrendered. While the army reported only one Indian killed, the captives reported that 28 were killed. One observer of the battle wrote:

“The Bannock decided to surrender to the troops, and they moved in a peaceful manner to do so. Nevertheless, volleys of gun-fire were poured into them and several of them were killed.”

“It seemed to me that killing these Indians when it was plainly evident they were trying to surrender was a violation of the humanities. They did not respond to the fire.”

In looking back at the causes of the Bannock War, the territorial governor explained that Camas Prairie was the Indians’ garden and it provided them with an abundant supply of vegetable foods. The governor further explained that the government had failed to follow through with the treaty stipulation to assign the prairie as part of the reservation for the Bannock. He recommended that immediate action be taken to assign it to the Fort Hall Reservation or to compensate the Indians in some other way.

In an interview with the Omaha Herald, General George Crook explained that the root cause of the Bannock War was hunger. He said:

“It cannot be expected that they will stay on reservations where there is no possible way to get food, and see their wives and children starve and die around them. We have taken their lands, deprived them of every means of living.”

“Our Indian policy has resolved itself into a question of warpath or starvation; and, merely being human, many of them will choose the former alternative where death shall be at least glorious.”

The Idaho Statesman disagreed with General Crook, and the editor wrote:

“It was not the want of food which started them upon the warpath, but their savage thirst for blood, which had not been restrained and prevented by proper discipline and Governmental supervision.”