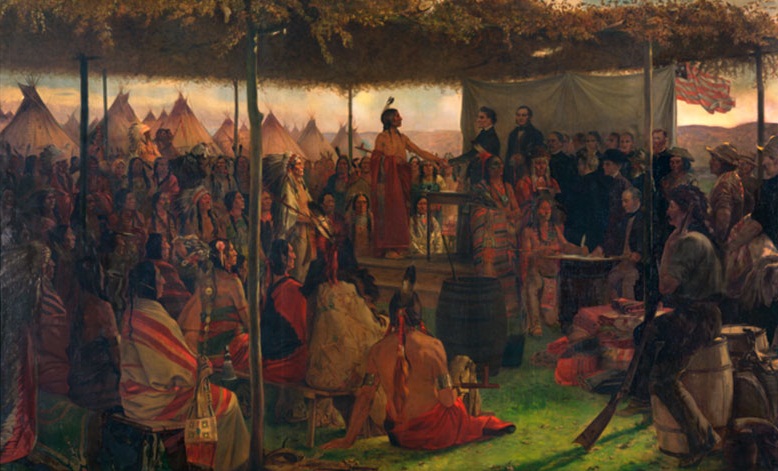 A treaty is simply an agreement between two sovereign nations. In the American political system, a treaty involves three basic steps:

(1) First, there is negotiation. Representatives from the U.S. government meet with representatives of the other governments, discuss mutual concerns, and arrive at some sort of agreement.

(2) This is then followed by Senate confirmation. The Senate, according to the Constitution, advises the President on international matters. Thus, the Senate has the opportunity to debate and discuss the agreement, and to confirm it.

(3) Finally it is signed-proclaimed-by the President.

From the time the U.S. Constitution was adopted in 1787 until 1871, the United States government, following the legal view that Indian tribes are nations, negotiated and signed treaties with Indian nations. The process of negotiating Indian treaties can best be viewed as a form of internal diplomacy and foreign affairs and provides some insights into how the United States deals with other countries.

Legally a treaty is a form of law which is superior to state and local law. George Washington envisioned treaties with Indian nations as binding on both parties in perpetuity. He felt that both the power and the honor of the federal government would be pledged to their enforcement.

In the first Indian treaty negotiated under the Constitution-a treaty with the Creek Confederacy in 1789-George Washington interpreted the constitutional requirement to obtain “the advice and consent” of the Senate as meaning that he had to appear in person before the Senate prior to treaty negotiations. This proved to be a bit of a fiasco and never again would a President appear in person to seek the advice and consent from the Senate on a treaty. Hereafter, the treaty would be sent to the Senate for their approval after it had been negotiated.

The first problem in negotiating an Indian treaty was to determine with whom it should be negotiated. In 1787, in his Defence of the Constitutions of Government of the United States, John Adams recommended that political leaders pay attention to the governmental structures of Indian nations, particularly the separation of political powers and their democratic legislative structure. Unfortunately no-one paid any attention to Adams’ advice.

In general, the United States was unaware of how most American Indian governments worked and the fact there was great diversity in these governments. Wishing to negotiate with as few sovereign entities as possible, the American negotiators failed to understand Native American concepts of sovereignty. On the Great Plains, for example, each band was an autonomous unit, but the Americans tended to ignore this fact and simply grouped bands who spoke a somewhat similar language together as a single tribe. The concept of tribe, as we use it today in referring to Indian nations, is actually a concept which was superimposed upon Indian peoples.

Many American Indian governments in the nineteenth century were participatory democracies in which all had a right to speak and be heard in council. No single leader had the right to tell another person what to do. Leadership was by persuasion and example, not by authority and force. Deliberations would generally continue until all agreed and those who disagreed would simply leave and would, therefore, not be bound by the council decisions.

American negotiators preferred to deal with dictatorships rather than democracies. Since almost no Indian nations were dictatorships, this meant that the United States simply appointed the chiefs with whom they negotiated. In this way, the United States only had to deal with a handful of Indian leaders, leaders who tended to be agreeable to American interests as they had been appointed by American officials. The United States often ignored leaders who were chosen by Indian people and preferred to deal with the “puppet dictators” which it had set up. The Americans maintained their chiefs by putting them on the payroll and by putting them in charge of distributing gifts and money to their people. By encouraging graft and corruption, the Americans hoped to gain the loyalty of the leaders they appointed.

One example of the Americans inability to deal with women leaders can be seen in 1831 in their negotiations with Black Hawk’s Sauk in Illinois. The band had returned to their traditional home of Saukenuk, an area which they had farmed for many generations. They were met by an American militia force who insisted that the Sauk had no right to be in Illinois, nor to farm their traditional lands. The Sauk met in council with the Americans to see if they could settle the matter peacefully. Black Hawk told the Americans that the women owned the fields, not the men. Then a woman selected by the other women addressed the Americans. In her short speech she declared the land-especially the cornfields and gardens-actually belonged to the women rather than the whole tribe, and let it be known that the women had never sold any of the land nor consented to the transfer of it to the United States. The American negotiator simply dismissed her comments and said that the President did not send him to make treaties with women nor to hold council with them.

There are numerous examples of the American negotiators engaging in “making chiefs” by appointing the men they want as “supreme” chiefs. At the Fort Laramie Treaty Council in 1851, for example, each tribe was asked by the American negotiators to provide a single chief of the whole nation. After council with his people, chief Terra Blue of the Brulé (one of the Sioux tribes), said: “we have decided differently from you, Father, about this Chief for the nation. We want a Chief for each band.” The Americans responded by selecting a single chief-Frightening Bear–to represent the entire Sioux nation.

At the 1855 treaty council in Walla Walla, Washington, the Americans lumped 14 autonomous, culturally distinct, and sovereign Indian nations together under the designation “Yakama” and then declared Kamiakin as head chief. While the Americans claimed that Kamiakin signed the treaty on behalf of the 14 “confederated” bands, Kamiakin insisted that he touched the pen to the paper only for himself and only to indicate his personal friendship with the Americans. He made no claims of representing any group.

While the concept of negotiation might conjure up an image of give and take, of talking and listening, the American negotiators often seemed to be incapable of listening. They came to the councils with an outcome already predetermined by their ideology and had no intention of letting either facts or opposing viewpoints get in their way. They often came with a treaty that they wanted to impose upon the Indian nations. At the Walla Walla treaty council, Governor Isaac Stevens became frustrated with the Indians’ reluctance to simply sign the treaty he had brought with him that he held the treaty up and told them: “If you do not accept the terms offered and sign this paper you will walk in blood knee deep.”

In the treaty negotiations with the Creek Confederation in 1787-the one that President Washington had sought a priori Senate approval for– Alexander McGillivray, the Creek Head Chief, told the Americans that he would not have this treaty crammed down his throat. He gathered up his 900 warriors and left. Secretary of War Henry Knox informed President George Washington: “We have the Mortification to inform that the Parties have separated without a treaty.”

The United States stopped making treaties with Indian nations in 1871. Angered by the budget considerations in the Indian treaties, the House of Representatives attached a rider to an appropriations bill which stopped all treaties. Since that time there have been agreements with the Indian nations, but these agreements, unlike treaties, have to be approved by both houses of Congress.