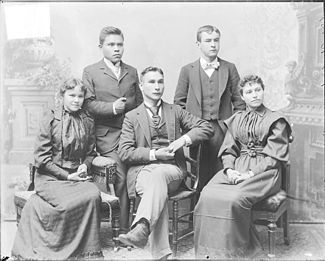 During the last part of the nineteenth century the emphasis of the United States Indian policy was on assimilation. According to this philosophy, American Indians, just like other immigrants to the United States, should assimilate into “mainstream” America. One of the concerns at this time was the lack of surnames among Indians.

American Indians have often noted that non-Indians have an obsession with private property. Government concerns with Indian surnames stems from this concern. The concern for private property goes beyond the individual accumulation of property and includes the ability to pass this property on to the property owner’s descendents, thus helping to create family fortunes.  Family lineages are an important part of private property.

In 1887, the Congress passed the General Allotment Act (Dawes Act) with the intent of assimilating Indians by making them land-owning farmers. The idea of the Dawes Act is to break up the reservations by giving each Indian family an allotment of land, similar to the homesteads given to non-Indian settlers.

In breaking the reservations up into individually owned allotments, the first step was to put together a tribal roll. Regarding Indian names on these tribal rolls, Sioux physician Charles Eastman wrote:

“Originally, the Indians had no family names, and confusion has been worse confounded by the admission to the official rolls of vulgar nicknames, incorrect translations, and English cognomens injudiciously bestowed upon children in the various schools.”

Government concern for Indian names, particularly surnames, was directly connected with allotments. The allotments came under territory and state inheritance laws. All of these laws were based on Euro-American family relationships and therefore the result was confusion if an allottee died intestate and local officials had to determine the heirs.

In 1890, the Commissioner of Indian Affairs ordered Indian names on the reservations to be changed so that each Indian would be given an English Christian name and retain the surname. Surnames were to be translated to English and shortened if they were too long. Care was to be taken to avoid translations of Indian names that might be offensive to non-Indians. The new names were to be explained to the Indians.

One of the ways of creating the new Indian surnames was to use the name of the father as the family name. This also meant that the Indian agents had to attempt to stop the traditional practice of assigning Indian names. This practice ignored the fact that many Indian nations were matrilineal, that is, a person belonged to the mother’s clan or family.

On some reservations, the Indian agent changed names such as Lone Bear to Lon Brown, Night Horse to Henry Lee Tyler, and Yellow Calf to George Caldwell. On some reservations, Indians were given names such as “Cornelius Vanderbilt” and “William Shakespeare.” Presidential names were also popular and so a number of Indians were named George Washington, Thomas Jefferson, Abraham Lincoln, and others.

On the Wind River Reservation in Wyoming, the Indian agent reported that:

“Now every family has a name. Every father, mother; every husband and wife and children bears the last names of these people; now property goes to his descendant.”

“During my administration I took a census of over two thousand names and had them all change, though it took over two years to accomplish the task.”

In noting that Indians often change names in response to events in their lives, Frank Terry, the Superintendent of the Crow Boarding School wrote in 1897:

“Hence it will be seen that the Indian names are nothing, a delusion, and a snare, and the practice of converting them into English appears eminently unwise.”

He also noted that the requirement to give Indians American-style names had not been uniformly carried out:

“While some have made earnest efforts to carry out the wishes of the Department in this particular, others have treated the matter as one of little or no concern. In many cases no attempt seems ever to have been made to systematize the names of the Indians, and in many others where such attempt was made the correct names for want of attention on the part of officers in charge, have been forgotten or permitted to fall into disuse.”

In addition to having the Indian agents give Indians more “civilized” names, the government also assigned new names to Indian students in both their boarding schools and in their day schools.

In 1890, the Commissioner of Indian Affairs published a detailed set of rules for Indian schools. Schools were to give Indian students surnames so that as they could become property owners it would be easier to fix lines of inheritance. Since most teachers could not pronounce or memorize names in native languages, and they did not understand these names when translated into English, it was not uncommon to give English surnames as well as English first names to the students.

In the school established for the Quileute on the Coast of Washington, the schoolmaster gave the students names from the Bible and from American history.