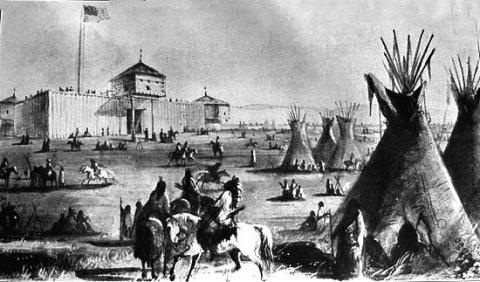 By the mid-nineteenth century, the American obsession with private property was guiding policies regarding American Indians. The idea that Indian people held property-that is, land-in common rather than having individuals own it, was repulsive to Americans. In 1850, the policy of “civilizing” Indians was described this way by the Commissioner of Indian Affairs:

“When civilization and barbarism are brought into such relation that they cannot coexist together, it is right that the superiority of the former should be asserted and the latter compelled to give away. It is, therefore, no matter of regret or reproach that so large a portion of our territory has been wrested from its aboriginal inhabitants and made the happy abode of an enlightened and Christian people.”

The following year, the Secretary of the Interior (that is, the top U.S. official in charge of Indian Affairs) stated:

“You must tie him down to the soil. You must make him understand the value of property and the benefits of its separate ownership. You must appeal to those selfish principles implanted by Divine Providence in the nature of man for the wisest purposes and make them minister to civilization and refinement.”

From an American viewpoint, civilization means that some individuals must be allowed, actually encouraged, to accumulate more wealth and power than others. The egalitarian nature of most Indian societies and common land ownership, therefore, stood in the way of progress, and in the ability of non-Indians to “legally” obtain Indian land.

In 1851, the United States called a treaty council with the Indian nations of the Northern Plains at Fort Laramie, Wyoming. Attending this council were the Sioux (though records fail to note which Sioux tribes participated and the Americans seem unaware or unconcerned that there is no single Sioux nation), Cheyenne, Arapaho, Shoshone, Crow, Assiniboine, Arikara, Gros Ventre, Mandan, and Hidatsa nations. An estimated 8,000 – 12,000 Indians gathered for this council.

One of the events of the council was the spectacular entry of the Crow into the council grounds. Riding on painted horses, singing their war songs, with chiefs Big Robber and Mountain Tail holding their ceremonial pipes like royal scepters, they rode into the crowd of Indians who had already gathered.

The purpose of the council and of the resulting treaty was to establish peace between the United States and the tribes, including a promise to protect Indians from European-Americans, and to stop the tribes from making war with one another. One of the major reasons, from the perspective of the United States, for obtaining peace agreements was that there was a growing stream of American emigrants travelling west on the Oregon trail to settle on Indian lands farther west.

After passing the pipe, D.D. Mitchell told the chiefs:

“We do not want your lands, horses, robes, nor anything you have; but we come to advise with you, and make a treaty with you for your own good.”

This was simply one of many lies the Americans told during the council. The Americans also arrogantly assumed that they had the right, as a Christian nation, to govern Indian nations.

Americans have traditionally been reluctant to deal with democracies, preferring instead to deal with dictatorships. At the Fort Laramie Treaty Council, each tribe was asked to provide a single chief of the whole nation. After council with his people, chief Terra Blue of the Brulé (one of the Sioux tribes), said:

“we have decided differently from you, Father, about this Chief for the nation. We want a Chief for each band.”

The use of the word “band” is, perhaps, a poor translation into English of the Sioux political organization as it actually referred to a sovereign, independent, political entity. Mitchell responded to this request by selecting a single chief-Frightening Bear–to represent the entire Sioux nation. Thus the United States attempted to create not only a dictator, but also a fictitious “nation” to go with it.  What the Americans considered to be the Sioux nation was actually several distinct nations.

The Arapaho selected Little Owl and Cut Nose to sign the treaty and Little Owl was designated as head chief. The Cheyenne had difficulty in selecting a head chief, but finally selected the keeper of the sacred arrows, He Who Walks with Toes Turned Out. He Who Walks with Toes Turned Out was not particularly well-known for his leadership ability, nor was he skilled in dealings with the Americans.

The Americans designated Crazy Bear to the position of Assiniboine tribal chief. As with the Sioux, there were actually several independent Assiniboine groups, a fact ignored by the Americans. Negotiating the treaty with Crazy Bear is First Fly (also known as The First Who Flies).

The Americans provided each of the head chiefs with a full major-general’s uniform. In addition, the chiefs were delegated to distribute the goods issued by the federal government. The goods given to the chiefs to distribute to their people at the council included tobacco, serge, vermillion, blankets, knives, beads, sugar, and coffee. By having the chiefs, most of whom were chosen by the United States, in charge of the distribution of goods, the Americans hoped to build the power of dictators who would be loyal to American causes rather than tribal causes.

At the Fort Laramie Treaty Council, each tribal area was defined, including an area for the Blackfoot Nation which was not represented at the Council. Defining tribal lands was seen as the first step in being able to acquire title to these lands and thus disposes the Indians.

The Council ignored the participation of the Shoshone and assigned their northeastern hunting range to the Crow.  As there were no River Crow at the Council, the Mountain Crow version of their geographic rights and hunting areas was used and was assumed by the Americans to be binding to all of the Crow tribes.

Signing the treaty for the Yankton Sioux was Smutty Bear who complained about the destruction of grass and trees by travelers on the Overland Trail and about the subsequent scarcity of game. While this was a major concern for the Indians, it was dismissed as being a minor issue by the Americans. Their focus was on land ownership with no concern about environmental degradation.

The treaties which the Indian chiefs signed called for annuities to be paid to the Indian nations for 50 years. However, while the treaties were viewed as binding upon the Indian nations immediately upon signing, they were not binding on the United States until they had been ratified by the Senate. The Senate, annoyed by the idea of paying Indians so much money for their land, simply changed the terms of the treaty from 50 years to 10 years with the right to continue the annuities for an additional 5 years at the discretion of the President. The tribes, of course, were not consulted nor even notified of this change. Writing in 1881, Helen Hunt Jackson opined:

“To comment on the bad faith of this action on the part of Congress would be a waste of words; but its impolicy is too glaring that one’s astonishment cannot keep silent-its impolicy and also its incredible niggardliness.”

The act of unilaterally changing an agreement which had been understood to have been final was a clear signal to the Indians that the word of those representing the United States was not to be trusted. Some Indian leaders would later indicate that all words spoken on behalf of the United States should be considered to be lies.