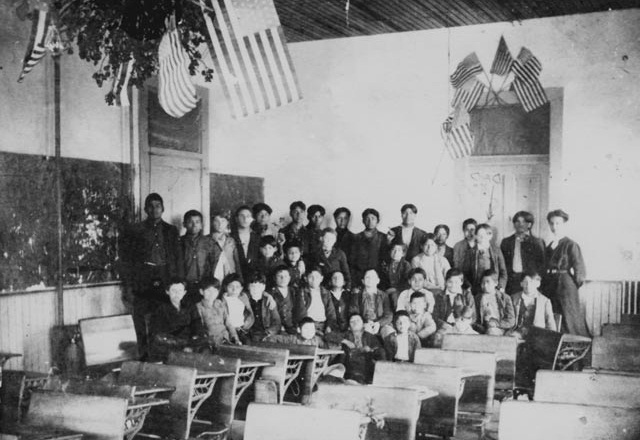 By 1840, some 40,000 Indians from the Five Civilized Tribes-Cherokee, Choctaw, Chickasaw, Creek, and Seminole-had been resettled in what is now Oklahoma as a part of the efforts of the American government to remove all Indians from American territory east of the Mississippi. Each of the Five Civilized Tribes was organized into self-governing republics and was attempting to re-establish themselves in this new territory.

Under the terms of the 1830 Treaty of Dancing Rabbit Creek, the United States had promised the Choctaw that it would construct schools for their children and pay for the teachers. In addition, the United States was to provide 20 scholarships per year for 20 years for Choctaw students to go to college.

In 1831, the Choctaw removal began and they began to establish a new government and a new way of life west of the Mississippi River. By 1832, an estimated 6,000 Choctaw had settled in Oklahoma. In 1833, the Choctaw established a tribal school system and built 12 log schoolhouses.

Manual labor schools were established for Indians in Oklahoma by the United States government in 1834. The first of these was among the Choctaw. The school was run by a Baptist minister and was designed to teach letters, labor, mechanical arts, morals, and Christianity. The United States government felt that it had an obligation to force conversion to Christianity upon the Indians as a way of paying them for the land which the government had taken from them. Conversion to Christianity was seen as a required step in the process of becoming “civilized.”

By 1837, there were at least 15,000 Choctaw who had been removed to Oklahoma. By 1838, the teachers in the Choctaw’s 12 neighborhood schools were being paid from their treaty funds. The students were being supported by their parents.

The Choctaw Academy had been established near Lexington, Kentucky in 1826. While the school was partially funded by Choctaw annuities, the majority of its students were not Choctaw, but included Creek, Seminole, Shawnee, Potawatomi, Pawnee, and others. Upon arriving at the school, the students were given English names, usually the name of prominent political and government officials. The curriculum included both liberal arts and vocational education, together with preaching intended to convert the young students to Christianity. The religious objectives of the school were endorsed by the government. The Indian students at the Choctaw Academy were also considered to be hostages who would help prevent war between their tribes and the United States.

The Choctaw boarding schools intended to teach Choctaw boys agriculture and mechanical arts. Choctaw girls were to learn how to sew and make clothing and to do household chores. Additional subjects taught by the schools included business skills and reading, writing, and spelling in the English language. Arithmetic, music, and geography were also taught, and in some schools pupils learned algebra, geometry, U.S. history, chemistry, philosophy, botany, astronomy, painting, drawing, and Latin grammar. Students were generally ten to sixteen years of age

The Wheelock Mission was chosen as the site for the female boarding school. In 1843, the Wheelock Female Seminary on the Choctaw Nation formally opened. While missionaries generally found the Choctaws’ native tongue to be the most effective language of instruction, the Choctaw Council, under the influence of the mixed-bloods, insisted that English be used exclusively in the boarding schools. Since English was a foreign language to most of the students this acted as a barrier to their progress. Students were forbidden to speak Choctaw not only in the classroom, but in addition the girls were forbidden to use it when conversing with each other.

With regard to instruction, five hours each day were dedicated to the classroom and four hours to domestic skills. Each of the girls was also assigned to household chores. In order to help defray the costs of operating the schools, the students helped operate the school. Academically, this was justified as a way of teaching them practical hands-on-experience in how to manage a dairy, feed a family, and care for a home. While they learned the skills necessary to run a non-Indian household, they were being purged of many traditional customs.

The school was viewed as an important instrument for spreading Christianity among the Choctaw. In nineteenth century terminology, a “seminary” was not a school dedicated solely to religious instruction, but one which offered a four-year high school curriculum.

In 1844, the Choctaw finished construction of the Spencer Academy. The boarding school was intended to accommodate 100 boys. The school was named for John Spencer who served as Secretary of War from 1841-1843. Spencer donated a 250-pound bell to the school.

The Civil War interrupted the Choctaw school system and all of their schools were closed. After the war some of the boarding schools were re-opened. The New Hope Seminary and Spencer Academy were revived in 1871. In 1884 the Armstrong Academy was reopened as a school for orphan boys aged six to twelve, and the Wheelock Academy was reestablished as a school for orphan girls of the same age.