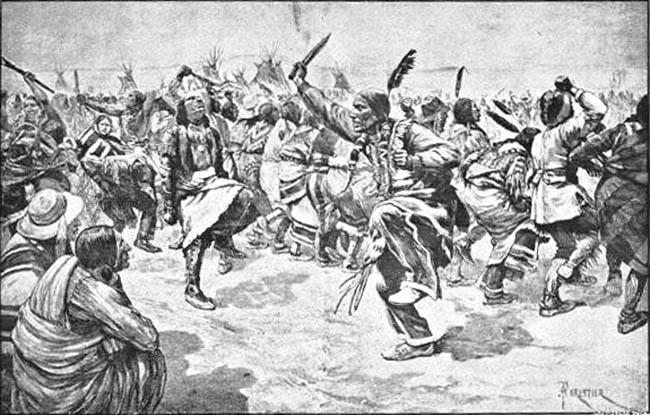 When describing the Wounded Knee massacre of 1890, many history books make two major errors: (1) they claim that this was the end of the Ghost Dance movement, and (2) they claim that this was the last armed conflict between Indians and the U.S. military. Neither of these is true. The Ghost Dance movement originated with the vision of the Paiute prophet Wovoka and continues to be celebrated today. It did not die at Wounded Knee.

The Ghost Dance movement began with a vision which was received by Wovoka. Among the Paiute, the dance was a Paiute world-renewal dance in which the dancers would hold hands as they danced in a circle with a side-step motion. The innovations by Wovoka were primarily in the form of new songs. Among the Paiute, as well as among other American Indians, individuals who received instructions in their visions were encouraged to compose new songs and to modify the ceremonies to conform to their visions.

The Ghost Dance movement spread quickly to the Northern Plains, particularly to tribes whose Sun Dance ceremony had been repressed by the government. On the Plains, the Ghost Dance became a four-day round dance in which the dancers would hold hands as they danced sun-wise (clockwise) with a side step. During the dance, the leaders (known as prophets) would wave eagle-wing fans before the faces of the dancers and/or shine mirrors in their faces. Coupled with the singing and dancing, this would help induce a trance state among the dancers and in this state they would be transported to a world in which they would see their departed relatives from the pre-reservation era.

Among the Plains tribes, the Ghost Dance also included special shirts and dresses, usually made of buckskin or white muslin, which were decorated with symbols which referred to the dancer’s visions. These symbols were often stars, suns, moons, eagles, and other birds. Among the Sioux, the followers of the Ghost Dance felt that their Ghost Dance clothing was able to deflect bullets.

On the Rosebud Reservation, Short Bull described the dance among his people:

“First: purification by sweat bath. Clasp hands and circle to left. Hold hands and sing until a trance is induced, looking up all the time. Brought to pitch of excitement by singing songs prescribed by the Messiah. Dress as prescribed. Froth at mouth when in trance. They must keep step with the cadence of the song. The[y] go into trance in from ten minutes to three quarters of an hour. Each one described his vision. Each vision is different from others. Men, women, children have visions.”

While many historians claim that the massacre at Wounded Knee in 1890 ended the Ghost Dance movement among the Sioux and other Northern Plains tribes, the Ghost Dance actually continued to spread among the tribes. It is important to remember that all Indian religions were illegal at this time so the Ghost Dance had to be kept away from the Indian agents and other non-Indians.

In 1891, Northern Arapaho leader Black Coal was dubious about the merits of the Ghost Dance. He sent a delegation-Yellow Eagle, Washington, Goes in Lodge, Black Bear, and Michael Goodman-from the Wind River Reservation in Wyoming to Nevada to investigate the claims. When the delegation returned, they spoke against the movement-or at least that is what the Indian agent was told. However, many Arapaho, including Sharp Nose, continued to participate in Ghost Dance ceremonies.

At this same time, the Shoshone on the Wind River Reservation abandoned the Ghost Dance. The Indian agent assumed that they abandoned the dance because the predicted new world had not materialized.

In 1891, the Gros Ventre in Montana were introduced to the Ghost Dance by the Northern Arapaho from the Wind River Reservation in Wyoming. The Arapaho also transferred the associated hand game bundle ritual to several Gros Ventre men. The Gros Ventre and the Arapaho are linguistically and culturally related tribes.

In 1892, with reduced rations the Arapaho on the Wind River Reservation were starving and many turned to the Ghost Dance for help. With tears running down their cheeks, they sang:

Father, have pity on me,

Father, have pity on me.

I am crying for thirst,

I am crying for thirst.

All is gone-I have nothing to eat,

All is gone-I have nothing to eat.

In 1900, the Department of the Interior, at the request of the Indian agent for the Northern Cheyenne reservation in Montana, ordered that Porcupine be arrested, confined, and punished for being a leader in Wovoka’s Ghost Dance movement. He was subsequently arrested and turned over to the commanding officer of Fort Keogh where he was to do hard labor. There was no trial: Indians did not have any rights in the eyes of the Indian agents even though the courts had consistently ruled that the Constitution applied to Indians. The Indian Office (now known as the Bureau of Indian Affairs) and its reservation agents simply imprisoned any Indians who opposed their programs.

In 1902, the Ghost Dance was revived among the Assiniboine on the Fort Belknap and Fort Peck Reservations in Montana by Kicking Bear and Short Bull, Sioux Ghost Dance leaders from the Pine Ridge Reservation in South Dakota. The Assiniboine incorporated sacred red and white paint, feathers, and medicines for healing into the dances. They obtained these materials through the mail from Wovoka.

The fact that Kicking Bear and Short Bull were both acknowledged Ghost Dancer leaders from Pine Ridge is a good indication that the Ghost Dance was still alive on this reservation at this time even though the officials on the reservations would deny it.

In 1902, Fred Robinson, an Assiniboine from Montana who was living among the Sioux on the Moose Woods Reserve in Saskatchewan, received instruction on Wovoka’s Ghost Dance creed from Kicking Bear. Moose Woods was under the control of a Methodist minister at this time, so there was no place on the reserve for a rival religion. However, at the Round Plain Reserve there were many who were receptive to the new religion. By 1905, Robinson was receiving Ghost Dance medicines in the mail directly from Wovoka. These medicines included red ocher which was packed into a tomato can.

In 1910, Assiniboine Ghost Dance leader Fred Robinson wrote to the Paiute prophet Wovoka in Nevada and told him of the progress that he was making in preaching the creed among the Sioux on the Round Plain Reserve in Saskatchewan. He wrote:

While the Indian agents on the Southern Plains reservations in Oklahoma attempted to suppress the Ghost Dance by jailing participants, there was not the military intervention that had led to the Wounded Knee massacre.

In 1891, Northern Arapaho Ghost Dance leader Sitting Bull (not to be confused with the Sioux leader by the same name) visited the Southern Cheyenne reservation bringing with him the Ghost Dance doctrine. The Arapaho and the Cheyenne had historically been allies and there was a great deal of interaction between the two tribes.

After bringing the Ghost Dance to the Southern Cheyenne, Sitting Bull traveled to nearby reservations in Oklahoma, teaching the Ghost Dance and advising tribes to accept allotment of lands and take annuity payments from the government. Sitting Bull carried the new religion to the Caddo and Wichita. It was here that Pawnee ceremonial leader Frank White became converted to the new religion.

Having heard about the Ghost Dance and Wovoka from Sitting Bull, the Caddo send Billy Wilson and Squirrel to talk with the Paiute prophet Wovoka in Nevada. Two Wichita delegates-Nashtowi and Lawrie Tatum-and one Delaware delegate-Jack Henry-travelled with them. They returned to the Oklahoma reservations impressed and reverent of Wovoka and his theology of peace and healing.

Having learned about the Ghost Dance from the Caddo and Wichita, Frank White began to teach the doctrine and songs of the Ghost Dance to the southern bands of the Pawnee. He told the people to prepare for the coming of the kingdom:

“You must stop working because when the kingdom comes you won’t take plows or things like that along. That’s not ours.”

At first the songs used in the Pawnee Ghost Dance were Arapaho and Wichita songs.

While White saw himself as a prophet, he was also respectful of Pawnee culture. He met with the elders and discussed his vision. The elders accepted his vision and were satisfied with him in the role of Ghost Dance prophet.

Hundreds of Pawnee gathered to dance the new dance so that they could see their deceased loved ones. In the visions enhanced by the dancing, people saw not only their relatives but also the dead Pawnee doctors and spiritual leaders. These leaders instructed the visionaries in the performances of the rituals and healing arts and advised them to carry out the practices as best they could under the reservation circumstances.

The Indian agent for the Pawnee attended a Ghost Dance and later reported to his superiors that “there has been no Ghost Dance here or at any of our agencies.” The Pawnee gave the appearance of going about their daily lives, ignoring the new dance. By  diverting suspicion from themselves, they were able to explore the Paiute religion and quietly adapt it to their own traditions and beliefs.

Among the Pawnee, the Ghost Dancers wore eagle and crow feathers in their hair. At the beginning of each dance a woman is chosen to bless the dance grounds. At the end of each day of dancing, the dancers move to the center of the circle and then back out slowly shaking their blankets and shawls. In this way they cast off the burdens of the day.

Concerned about the increasing popularity of the Ghost Dance among the Pawnee, the Indian agent wrote to Frank White and ordered him to cease holding Ghost Dances. In addition, White was ordered to return to the Kiowa or Wichita agency. He chose not to leave his people or abandon the Ghost Dance.

In 1892, Joe Carrion (Pawnee) had a vision while visiting with the Southern Arapaho. In this vision, he was told that the Pawnee were able to introduce new innovations in the Ghost Dance. This helped to initiate a reorganization of the Pawnee Ghost Dance in which various individuals who had visions were able to develop their own forms of the dance. In his vision, Joe Carrion was also given the gift of the hand game which is incorporated into the Ghost Dance.

In 1892, the Indian agent for the Pawnee ordered them to stop doing the Ghost Dance. The Pawnee do not stop participating in the ceremony, but take it underground, away from the prying eyes and ears of non-Indians.

In 1894, the Ghost Dance was revived among the Kiowa when Setzepetoi (Afraid-of-Bears), a blind medicine man, had a vision. The revived Ghost Dance was noted for trances in which the supplicants could visit deceased relatives.

Three Pawnee travelled from Oklahoma to Walker Lake, Nevada to receive instructions from Wovoka in 1904. In their meeting with Wovoka they learned more about Wovoka’s initial vision. They also learned the correct ritual for the ceremony, including the use of a special painted tipi.

Drought threatened the Caddo corn crop in 1921. Ghost Dance leader Mr. Squirrel set up the pole in the center of the dance circle. For three days he prayed and danced while the corn burned in the sun. On the fourth day, the rain came.