When the European invasion of New England started in the seventeenth century, the American Indian people of the region had a varied and savory cuisine. As farmers they raised a variety of crops, including many different kinds of maize (corn), beans, squash, pumpkins, and strawberries. They supplemented these foods with wild foods obtained through hunting, fishing, and gathering. Many modern foods, such as corn bread, hominy, johnnycake, clam chowder, and others, have their origins in the aboriginal cuisine of New England.

Overall, the diet of the New England natives prior to the European invasion seems to have been healthier than that of the Europeans at the same time. Indian people consumed a great variety of different plants (both domesticated and wild) as well as fish, fowl, and meat. Among other things, food was freely shared. There were not some people who were undernourished while others were over-nourished. The better diet and the food sharing resulted in people who were often larger than the Europeans. 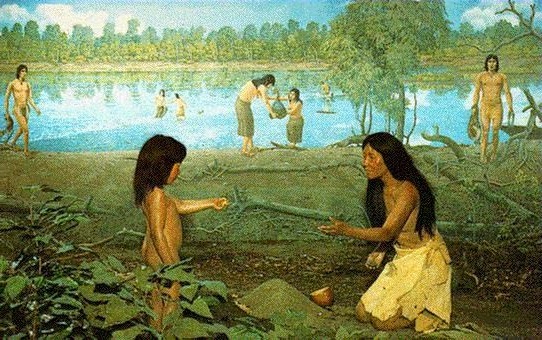 Much of the cooking done by the New England Indians was done by boiling. In some instances they used clay pots with pointed bottoms that would be placed in the midst of embers. Sometimes they would boil water in a basket made from green bark which would be suspended over hot coals.

Like Indian nations in other parts of North America, the aboriginal peoples of New England also used stone boiling. In this method, rocks would be heated in the fire until they turned red. They would then be placed in a container of water. In a fairly short time, the water could be brought to boiling and it would be kept there by continuing to add hot stones. The containers used for stone boiling included not only pottery vessels, but also baskets and leather bags. Stone boiling appears to have been more common in the north, particularly in what is known as the state of Maine.

For many of the Indian people in New England, fish was an important food. At times fish was cooked on a flat stone set on a bed of coals. Clams would be set on edge around a hearth to roast until their shells opened.

In Maine, the Indians would bake clams in piles over heated rocks which had been covered and interlaced with seaweed. It was not uncommon for them to add corn and slices of fish to the steaming pile.

Corn was the staff of life for New England natives and it was prepared in many different ways. One of the most common was to use ground corn to make samp, or newsamp, a kind of porridge. Both the early English and Dutch invaders found this to be a wholesome and tasty food.

Another common corn dish was pone or johnnycake. To make pone, mature corn would be pounded into a fine powder, then made into a dough with water or bear oil. It would then be made into cakes about an inch thick and baked in hot ashes. The baking might also be done on thin broad stones (probably soapstone) placed on the fire.

In some instances corn pone was mixed with other ingredients to make appoon. In the late spring, the people would make strawberry bread, then in early summer they would make raspberry and cherry bread, and in the fall, blackberry, blueberry, and elderberry bread.

Dumplings would be made by taking the dough (which might be mixed with berries or chestnuts) and boiling it for about an hour (usually until the dough floated). These dumplings could then be added to a pot of stew.

Hominy was made by boiling the corn kernels whole.

Travelers would carry with them bags of corn which had been pounded into a fine meal. When they needed to eat, they would then mix it with a little water. Some of the early Europeans report that just a quarter pound of this travel food, mixed with water, would make a hearty meal.

Beans were also baked in earthen pots or beanholes.

Squash and pumpkins were incorporated into Indian cuisine both as a main dish and as an addition to bread, stews, and porridges. Pumpkins and squash were also dried so that they could be consumed during the winter. Pumpkin and squash seeds were considered a delicacy and would be eaten either raw or cooked. When dried and mixed with water, pumpkin and squash seeds were felt to have medicinal properties and were used in treating urinary problems.

The oral history of the Mohegan tells that they came from “west by north” of another country, that they passed over great waters, that they had once lived beside a great body of water affected by tides, and from this they obtained their name – Muh-he-con-nuk – which means “great waters which are constantly moving”. They faced great famine and migrated toward the east where they found many great bodies of water, but none which flowed and ebbed.

As with other eastern tribes, corn was one of the principal foods of the Mohegan. Corn was prepared in a number of ways, including making hominy of the kernels and making a stew of beans and corn called succotash. Succotash is a basic American Indian dish. Among the Indian nations of the Northeast, succotash was kept simmering at all times so that any hungry visitor or family member could be fed.

Shown below is a contemporary recipe for Mohegan succotash:

½ cup of butter (to be really authentic, you should use bear grease instead of butter)

With a large, sharp knife cut corn cobs into 1 ½ inch lengths. Place corn, beans, water, and butter (or bear grease) in a large saucepan. Salt and pepper to taste.

About bear grease: bears were often hunted and their skins were tanned using a mixture of animal brains, bird livers, and fish oil. In addition, bear grease was applied directly to the body and in this way provided additional warmth in the winter and in the summer it served as an insect repellent.

Hunting and fishing provided supplemental calories.   In the summer, fishing was done in the ocean and in the winter along freshwater streams and ponds. The fish were dried by placing them in the sun or over smoky fires. One of the important fish to the Indians was cod.  Shown below is a contemporary recipe for Aboriginal New England Codfish Balls:

Place fish, potatoes, salt, and pepper in water to cover in a large saucepan. Cover and cook over medium heat for 25 minutes. Remove from heat and drain well. Stir in dill and mash or puree. Shape into 2- or 3-inch balls. Roll in cornmeal. Heat oil to 375 F. Fry codfish balls for about 1 minute, until golden brown. Remove from oil, drain well, and serve.

Queen Anne’s War in the North