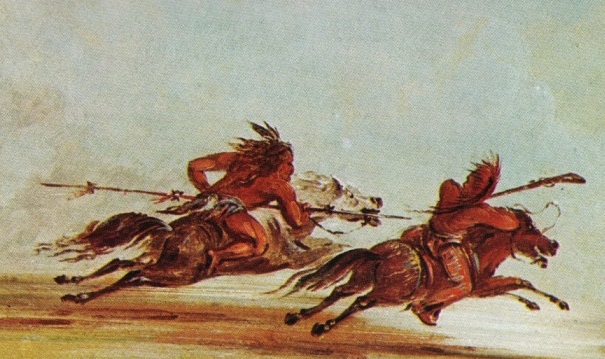 After the Indian Nations on the Northern Plains acquired the horse in the eighteenth century, warfare became more common. Northern Plains warfare, however, was very different from the warfare waged by European countries and later by the United States: it was not usually waged by one tribe against another. War was not waged to conquer other nations. While there were battles in which people were killed, the purpose of war was not to kill people.

Warfare was carried out by small, independent raiding parties rather than by large, organized armies. The motivation for war was personal gain, not tribal nationalism. Through participation in war an individual gained prestige, honor, and even wealth. Since wealth among the Indian nations of the Northern Plains was measured in horses, warriors could increase their wealth by capturing horses from other tribes.

For Plains Indian warriors, warfare centered around counting coup. “Coup” is a French word indicating “blow,” but for the Indian warrior coup was a war honor. A warrior did not count coup by killing the enemy or collecting scalps or capturing sexual slaves. While it was not uncommon for warriors to kill their enemies in battle, this was not in itself considered to be a particularly noteworthy act of valor.

Among the Blackfoot, the highest war honors were given to capturing an enemy’s gun. Also ranked high was the capture of a bow, shield, war shirt, war bonnet, or ceremonial pipe. The taking of a scalp ranked below these things.

During the nineteenth and much of the twentieth century many of the written and popular media accounts of Indian warfare stressed the practice of scalping. Yet among the Plains tribes, a scalp was not highly valued: it was simply an emblem of victory. Taking a scalp was not the goal of combat.

Warfare, according to Sioux writer Dr. Charles Eastman was about personal courage and honor:

“It was held to develop the quality of manliness and its motive was chivalric or patriotic, but never the desire for territorial aggrandizement or the overthrow of a brother nation.”

In addition to the acquisition of honor and prestige, war was about gaining personal wealth. An individual who had many horses could gain a great deal of prestige, particularly if he also gave away many horses. Wealth was something that was shared, it was not hoarded nor was it passed down to family members. Wealth had to be earned as it could not be inherited.

Plains Indian warfare was closely intertwined with religion, but not in the manner of the Europeans. Warfare was never waged because of religious differences. First of all, Plains Indian religions were generally based on animism rather than theism. In animistic religions, spiritual entities communicate with the people through dreams. Thus, a war party might form because a warrior would announce: “I had a dream…..” and those who felt that the dream was strong would join the war party. These dreams of war would usually describe where horses might be captured.

Success in war was generally attributed to the warrior’s individual spiritual power, not to the superiority of a religion, religious belief, or god. Religion, like warfare, was a highly personal thing. War medicine was often acquired through dreams and fasting. War medicine often involved a war song, face paint, and a sacred object to be worn during raids.

The military strategy for Plains Indian warfare involved the avoidance of unnecessary risks. From the viewpoint of Indian warriors, craft and cunning were superior to courage. To raid an enemy camp and to capture horses without being detected was a primary goal. Thus the American Corps of Discovery lead by Meriwether Lewis and William Clark lost half of their horses to a raid by Crow warriors and yet they never saw the warriors.

While war parties had nominal leaders, each warrior really fought alone. The goal was personal glory, not tribal victory. If a warrior saw a sign that indicated failure, the warrior might turn around and go home. This was a personal spiritual experience and no-one, including the war party leader, could insist that the warrior continue with the party.

Since surprise was a key element in Indian war strategy, war parties often travelled at night, attempting to avoid detection. The war party would travel in single file with the war leader taking the lead and young men on their first raid traveling in the rear. During the day they would try to stay hidden.

Warfare and the United States:

When the United States military first encountered the Indian nations of the Northern Plains in battle, the army did not understand either Indian military strategies or Indian motivations for fighting. The Indian warriors were not following the rules of war as understood by the Americans. The idea of warriors as individuals who did not follow orders and who could leave the field of battle whenever they wanted created in the minds of the military a stereotype of Indian warriors as cowards.

On the other hand, when Indian warriors first encountered the U.S. Army, they were baffled because the U.S. did not follow the well-established rules of war. The Army fought in the winter; it required soldiers to follow orders even when following them meant sure death; it sought to kill people rather than acquire honor; and it sought to obtain land and religious conversion.