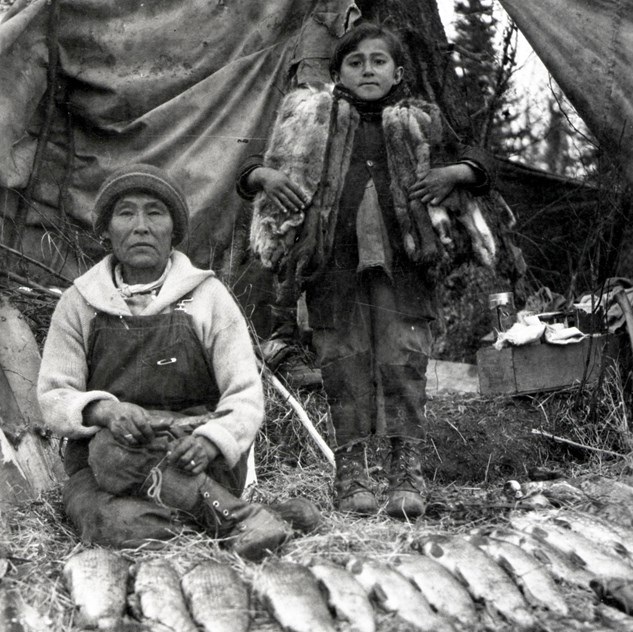 Funerary practices and beliefs about death are more about the living than the dead. They provide some insights into the cultures of the people. The several Pueblo cultures and the Athabascan cultures (Navajo and Apache) live in close proximity to one another in New Mexico and Arizona. These cultures, in spite of their geographic proximity, have very different beliefs about death and how to deal with dead bodies. Some of their funerary customs and beliefs are discussed below.

The Athabascan-speaking people – the Navajo and the Apache – migrated from the area north of Edmonton, Alberta.

In the late 1300’s and early 1400’s groups of hunting and gathering Athabascans began arriving in the Southwest from the far north in Canada. These were the ancestors of the Navajo and Apache peoples. While there are some scholars who feel that the Navajo and Apache could have begun arriving in the Southwest as early as 800 CE and some who feel that it was as late at 1500 CE, most tend to place their arrival between 1200 and 1400.

When the Spanish entered New Mexico, they recorded that the Tewa referred to one of the neighboring tribes as Navahú, in reference to large areas of cultivated lands. This is in reference to the Navajo practice of dry-farming in arroyos, and cañadas (canyons). The Tewa also referred to these newcomers as Apachü which means strangers and enemies. The Spanish would later refer to these people as Apache de Navajó meaning the Apaches with the great planted fields.

Among the southwestern Athabascan groups there is a fear of death and of dealing with both the bodies and the possessions of dead people. Among the Jicarilla Apache, for example, there is a great effort to keep children from seeing a dead person. In addition, children do not associate with other children who have family members who have recently died until the family has been cleansed by the proper ceremonies. There is a concern that children may be marked by the aura of death.

With regard to the Chiricahua Apache, at death the spirits begin a four-day journey to the spirit world. For the Chiricahua,  open burial sites are very dangerous between the moment of death and the time when the grave is covered. During this time the spirit of the deceased is loose and free. It is thus able to cause mischief or harm.  Funeral rites are expected to expedite the spirit’s journey.

Traditionally among the Navajo, the body of a dead person was left on the ground in the hogan (home) which was then abandoned or the body was immediately buried. The body was allowed to decompose because the memory, thoughts, and descendents are the part which lives on. The idea of putting someone in a coffin or putting chemicals in the body to preserve the corpse is viewed with disgust by traditional Navajo.

When a Navajo who has lived a full and long life dies, there is no period of mourning as it is felt that the spirit is ready to travel to another world. There is no dread of touching or handling the corpse of an old person.

With regard to life after death, this is an issue of little concern for most Navajo. They feel that they will find out when they die and in the meantime this is something they have no way of knowing anything about and therefore they should not waste time thinking about it. The Navajo cultural orientation is towards life, toward making this life happier, more harmonious, and more beautiful.

For the Navajo, birth and death are seen as opposites: one cannot exist without the other. Life is a cycle. It reaches its natural conclusion in death at old age. It is renewed in each birth. Death before old age is considered to be both unnatural and tragic. Death before old age prevents the natural completion of the life cycle.

In northern Arizona and New Mexico there are several Indian nations who traditionally lived in compact villages. The Spanish used the word pueblo which means “town” in referring to these people. The Pueblo people are not a single cultural tradition, but are in fact several distinct cultures. They share some features – farming, housing – and are very different in others.

Among the Keresian-speaking Pueblos of the Rio Grande area, death is viewed as a natural and necessary event: if there were no death, then soon there would be no room left in the world. After death, both the soul and the guardian spirit leave the body, but remain in the home of the deceased for four days. Then they journey to Shipap, the entrance to the underworld. The virtue of the deceased then determines the assignment to one of the four underworlds. Those who enter the innermost world become Shiwana (rainmakers) and return to the villages in the form of clouds.

Among the Zuni, the spirit of the dead lingers in the village for four days. During this time the door to the deceased’s home is left open to permit the entry of the spirit. On the morning of the fifth day the spirit goes to Kothluwalawa beneath the water of the Listening Spring. Here the spirit becomes a member of the Uwannami (rainmakers). Members of the Bow Priesthood become lightning makers who bring water from the six great waters of the world. The water is poured through the clouds in the form of rain. The clouds are the masks worn by the Uwannami.

Among the Hopi, a mask of cotton is placed over the face of the dead to represent the cloud mask which the spirit will wear when it returns with the cloud people to bring rain to the village. Four days after burial the spirit leaves the body and begins a journey to the Land of the Dead. They enter the underworld through the sipapu (sacred hole) in the Grand Canyon where they meet the One Horned God who can read a person’s thoughts by looking into the heart. Those who are virtuous follow the Sun Trail to the village of the Cloud People.

In the Hopi burials, clothing, water, and piki (a special bread) is often placed with the corpse. In many cases the Hopi will use a quilt as a burial shroud. The grave is then sealed with rocks.

When a kikmongwi (chief) dies, the staff which has symbolized his authority during his life is buried with him. In addition, his body is painted with symbols for important ritual occasions.

Among the Hopi, the spirits of children who die before they are initiated into a kiva return to their mother’s house to be reborn.

For the Hopi, the ancestors are important to their culture and they strongly feel that the physical remains of the ancestors should be treated with respect. Ancestors maintain a spiritual guardianship over the places where they are buried and they are not to be disturbed by archaeologists.

The Hopi see the clouds which bring water to their villages as ancestors and thus they petition their departed ancestors to return and to bring with them the life-giving rain. In this way, the Hopi view death as a return to the spiritual realm and from this comes more life in the form of rain.

Among most of the Pueblos, life after death is the same as before death: the deceased journey to a town where they join a group with which they were associated in life. Only the Hopi express the idea of punishment after death.

At Cochití, when a person dies, an ear of blue corn with barbs at the point is placed in the corner of the room where the death occurred. This ear of corn represents the soul of the deceased which will linger in the area for a while.

Death in the Piman and Yuman Cultures