Suqamish Chief Kitsap lived from about 1750 to about 1845. He was born and raised in Suquamish (in what is now Washington state). He was a friend and ally of Chief Sealth’s father. Kitsap had winter houses at Fort Madison and Pleasant Beach on Bainbridge Island. He was known as a brilliant war strategist and as an expert bow marksman. He often led intertribal forces from Puget Sound into battle against raiding tribes from the North. He was best known for leading a Suquamish raid to Vancouver Island to avenge an enemy tribe. For this, the Suquamish recognized Kitsap as a leader and historians have described him as  “the most powerful chief of all the Indians from Olympia to the Fraser River.” 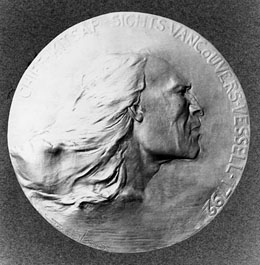 He helped build the Old Man House communal dwelling that became one of the largest winter houses in the Northwest Coast. The Old Man House was the center of the Suquamish winter village on Agate Pass, located just south of the present-day town of Suquamish. The original name of the site was D’Suq’Wub which means “clear salt water.”

The site of D’Suq’Wub was occupied for at least 2,000 years according to the archaeological investigations at the site. While some sources indicate that the longhouse itself was built in the late eighteenth or early nineteenth century, archaeology seems to suggest that it was originally constructed earlier than this.

In 1792, the British Captain George Vancouver arrived at the Strait of Juan de Fuca and took possession of the area for England, ignoring the fact that it had been occupied by American Indian nations for thousands of years. He named the area New Georgia after King George III. One of the Native leaders who met Vancouver’s party was Chief Kitsap. According to the Native accounts, Chief Kitsap helped guide the British through the area.

Vancouver noted that many of the Indians in the area had pock-marked faces, that many villages appeared to have been recently abandoned, and that there were many recent graves. This was probably an indication of smallpox. The Indians were not always friendly and the English found that they already had firearms and knew how to use them.