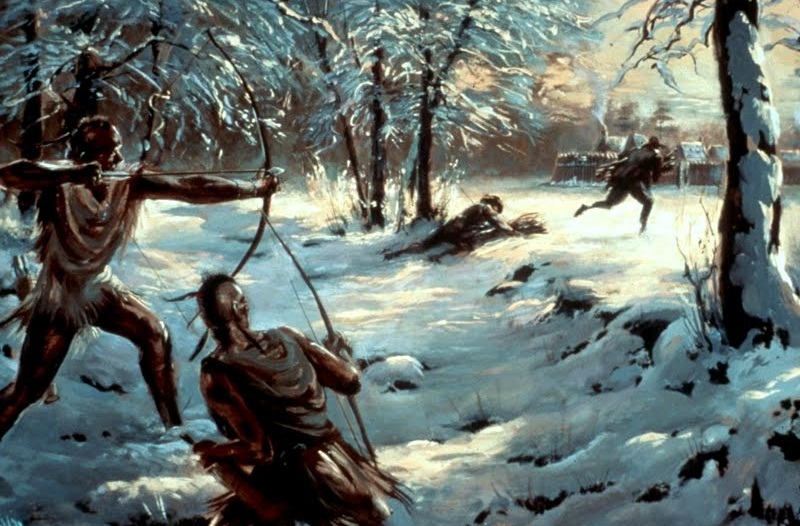 Indian people tend to be very patient. After three years of dealing with English arrogance and bullying, the Indian people of Virginia had had enough. The Powhatan felt that the advantages of trading with the English were not enough to warrant the difficulties which they caused. Thus 1609 marks the beginning of the first Anglo-Powhatan war.

The designation “Anglo” refers to the English colonists in Virginia. The Powhatan was a confederacy of Algonquian-speaking tribes. This confederacy was formed in the late 1500s, just prior to the English invasion, by a Pamunkey chief named Wahunsonacock. He brought under his control about 30 tribes—the data indicates that there were at least 27 Powhatan tribes and there may have been as many as 43—with 200 villages.

The war was a period of sporadic violence in which the two sides fought according to different rules of engagement. For the Indians, war was undertaken for a number of reasons: (1) to right a wrong or correct some improper action; (2) to restore justice; and (3) to teach proper behavior. Strategies of surprise and ambush were more common than set battles between two fixed groups.

Part of the conflict came from the failure of the English to understand that the basis for the Indian economic system was generalized reciprocity: that is, one would give a gift to another to show that a social relationship existed and to reinforce that relationship and, in return, the recipient of the gift would be expected to give another gift in return. When the colonists failed to make a return gift for a present of turkeys sent to them from the Powhatan, the relationship between the two groups was soured.

The Indians may have tried to explain to the English the importance and meaning of reciprocity, but the English failed to understand, possibly due to language problems, but more likely due to English ethnocentrism which viewed the English way of doing things as the only “natural” way. One incident which may have been an attempt to teach the English about Indian ways may be seen when Pocahontas warned the English of an impending attack. Her biographer, Paula Gunn Allen writes in Pocahontas: Medicine Woman, Spy, Entrepreneur, Diplomat:  “That her intervention might have been deliberately designed and implemented by the Great Council seems to have occurred neither to John Smith nor to subsequent historians.”

In 1609, Captain John Martin invaded Nansemond territory. The English attempted to purchase the island which contained the Nansemond ossuary, and when the Indians refused to sell, the English soldiers simply ransacked the burial platforms. After 17 of the soldiers were killed, the English abandoned the area.

In 1610, chief Powhatan told the English settlers to leave his country or to confine themselves to their settlement at Jamestown. Everyone—both the English colonists and the Indians—knew that if the Powhatan wished to exterminate the colony they could have done so.

When the Powhatan stopped trading with the colony at Jamestown, Virginia and the colonists faced starvation because they could not obtain the corn and other food they needed from the Indians. The colonists resorted to eating their own dead to survive.

The war changed when new soldiers and settlers arrived at the colony from England. The new arrivals were under the command of Lord de la Warr who soon proved antagonistic toward the Indians. With these reinforcements, the colonists began to wage a more aggressive war against their Indian neighbors. They attacked the Pasbahegh, Nansemond, Warraskoyack, Kecoughtan, and Chickahominee. For the next four years, the English would use the skills they had acquired in their war against the Irish to engage in a brutal, atrocity-ridden series of battles. The English, under the banner of Jesus Christ, waged a religious war against the Indians who they saw as the dangerous servants of the Devil.

In 1611, more English colonists under Sir Thomas Dale arrived and managed to establish a palisaded fort on an island in the James River. The warrior Nemattanew (also known as Jack of the Feather) often attacked the new fort. Nemattanew went into battle wearing feathered war regalia. He was believed to be invulnerable to musket-fire.

After four years of war, the English colonists in Virginia concluded a formal, written treaty with the Chickahominy in which the Indians agreed to send an annual tribute payment of corn to Jamestown.

The treaty between the English and the Chickahominy appears to have been masterminded by Opechancanough. According to historian Carl Bridenbaugh, in his book Jamestown, 1544-1699:  “Here was a master stroke of forest diplomacy by which Opechancanough deluded the English into believing that the Chickahominies were their allies at the same time that he was secretly drawing the once recalcitrant tribe closer to membership in the Powhatan empire.”