In the desert area of Arizona, an area now occupied by the greater Phoenix metro area, Indian people were farming corn, beans, squash, and cotton more than 2,500 years ago. Called Hohokam by archaeologists, these people developed a system of irrigation that carried water for many miles to their productive fields which yielded two harvests per year.

In the Phoenix Basin, the Hohokam brought some 70,000 acres under cultivation with their elaborate networks of irrigation canals. Along the canals were interdependent villages whose residents shared the work of constructing, maintaining, and managing the canals. In the larger communities there were basin-like structures which archaeologists have identified as ball courts. 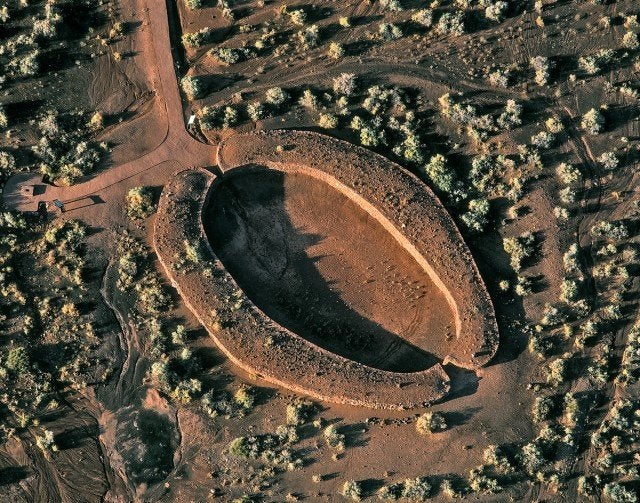 Balls courts were an important part of the ancient civilizations of Mesoamerica (Mexico, Guatemala, Honduras), such as the Maya. In Mesoamerica, the ball game which was played on these courts was often a ceremonial event which tied different communities together.

At about 600 CE the archaeological data shows the contact between the Hohokam and the civilizations of Mexico intensified. This marks the beginning of what archaeologists call the Colonial Period. Imports from the civilizations in Mexico at this time include cast copper bells, macaws (which are valued for their feathers), and mirrors made from bits of iron pyrite. Hohokam communities built ball courts between 700 and 1100 C.E.

While the Mesoamerican ball courts were generally built out of stone, in the Arizona desert the Hohokam built theirs by digging into the desert and piling the soil up on either side. Some of the ball courts were 250 feet (76 meters) in length and 90 feet (27 meters) in width. In some instances they were dug up to 9 feet (nearly 3 meters) into the subsoil.

With regard to the nature of the ball game, archaeologist Brian Fagan in his book Elixer: A History of Water and Humankind, writes:  “Quite what form the ball game itself took remains a mystery, but there is no question that it originated in Mexico, where commoners played a version of the contest that required each side to cast a rubber ball back and forth without touching the ground.”

Archaeologists have uncovered rubber balls similar to those used in Mesoamerica at sites in the Southwest. Historical records from Mesoamerica indicate that the ball games were generally the culmination of a period of feasting, trading, and social activities. Thus archaeologists feel that something similar was happening among the Hohokam. Some feel that the ball games were a way of integrating the various interdependent villages with tournaments between teams from different villages.

Some archaeologists feel that the ball games were associated with trading days or trading fairs. Artisans from many different Hohokam communities could come together for a single trading event in which a great variety of goods would be available. Writing in the journal American Antiquity, David Abbott, Alexa Smith, and Emiliano Gallaga write:  “We can imagine Hohokam potters in the middle Gila River valley packing up loads of their wares, walking one or two days to ballcourt events in the lower Salt River valley, while eager buyers anticipated these merchants’ arrival.”

There is some indication that some Hohokam villages specialized in producing some materials. For example, the Hohokam had a site north of Phoenix for the specialized production of manos and metates from a kind of quartz-basalt known as New River andesite. The manos and metates manufactured here were then traded to Hohokam villages and hamlets in other areas. The ball games would have provided a good opportunity for this type of trade.

At the Hohokam sites, archaeologists have observed that the ball courts were oriented in various directions. This seems to suggest that the different ball courts may have been used to celebrate different events in a ceremonial calendar.

The Hohokam managed to create large public works, such as their canal systems and ball courts, but there is no evidence of any ruling elites. The ball game may have integrated the communities, brought together for feasting, dancing, trade, and sport and in so doing reduced the need for social coercion and a ruling class. In 1100, however, they stopped building the ball courts and began building mounds, suggesting a change in their social and religious organization.