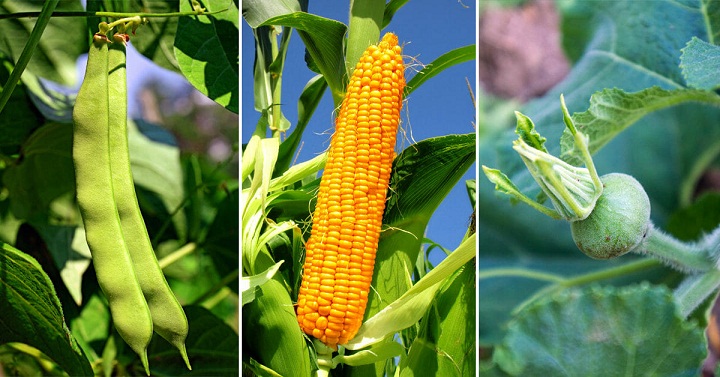 The domestication of plants is something that happened independently in many different regions of the world. The domestication of plants marks a fundamental change in the way people interact with and perceive their environment. Domestication is basically evolution which has been directed through human intervention. By the time of the European invasions in the sixteenth century, the Indigenous peoples of Mexico had already domesticated more than 50 different plants, ranging from avocados to yucca. Three of these plants—maize (corn), beans, and squash—became the focus of American Indian agriculture in North and Central America. Among the Iroquois these three plants were known as the Three Sisters.

Maize (Zea mays), commonly called corn in the United States, is undoubtedly the most important plant domesticated in Mexico. In their book Mexico: From the Olmecs to the Aztecs, Michael Coe and Rex Koontz write:  “Maize was and is the very basis of settled life in Mexico, and, in fact, throughout the regions of the New World civilized in Pre-Columbian times.”

Archaeologists debate several questions with regard to the domestication of maize: (1) What was the wild ancestor or ancestors of maize? (2) When did the fully domesticated maize first appear? And (3) how did maize cultivation spread both north and south into other regions of the Americas?

Maize is a grass and there are no known wild forms of this grass. In the highlands of the Mexican state of Chiapas and Guatemala, there is, however, a grass called teosinte (Zea Mexicana) which grows as an unwanted weed in and around Indian cornfields. Long before archaeologists had the tools of modern genetics and DNA, they hypothesized that teosinte was the probable ancestor of maize. Maize may have evolved through the human selection of teosinte plants. Some researchers assuming that teosinte was the progenitor of maize have suggested that maize originated in the Balsas River Drainage in western Mexico by about 7000 BCE.

Gary Crawford, writing in the Oxford Companion to Archaeology, reports:  “How corn was domesticated is problematic. As a grass, its fruit in the form of a cob is a monstrosity.”

Teosinte does not have a cob and this has led some researchers to suggest that the ancestor of maize may have been a wild plant, now extinct, which had a cob. Margaret Bunson and Stephen Bunson, in their Encyclopedia of Ancient Mesoamerica, write:  “The wild maize plants altered by mutation were collected by early inhabitants of Mesoamerica and slowly domesticated. The wild form appears to have become extinct, possibly through backcrossing with domesticated forms.”

However, this hypothesized plant, has not yet been found in the archaeological record. Nor is there any evidence that ancient humans harvested teosinte.

It was once thought that the people who oversaw the evolution of teosinte into maize were the Maya, but there is no direct evidence that the Maya were the overseers of this evolutionary transformation.

Dating the appearance of maize in the archaeological record has presented a few problems. At the present time some of the earliest findings come from phytoliths (fossil evidence of plant cells) found at San Andrés on the Gulf Coast of Tabasco near the Olmec site of La Venta. These date to about 4800 BCE and since there are no known wild species of Zea in the region, it suggests that they were introduced by humans. There is also some evidence of large-scale forest clearing at this time, an activity usually associated with the cultivation of maize. According to Michael Coe and Rex Koontz:  “If this Tabasco material is true maize cultivation, then it would be the earliest record of such activity that we have.”

Maize cobs found in caves in Tehuacan, Pueblo, were originally thought to date to 5000 BCE, but newer dating methods have revised this to 3500 BCE. At the present time, the earliest date maize cob comes from the Guilá Naquitz cave in Oaxaca which is dated to 4300 BCE.

While maize was the most important food staple in ancient Mexico, beans (Phaseolus vulgaris L.) were second in importance. Beans seem to have been originally domesticated in Mexico and Guatemala and then diffused, along with maize, to other parts of the Americas. With regard to beans, Michael Coe and Rex Koontz write:  “Its nutritional importance stems from the fact that its proteins complement those of maize.”

Beans seem to have been originally domesticated in Mexico’s Lerma-Santiago basin about 6,000 years ago. Beans were not grown in any significant quantities until they became a part of the diet that included maize and squash. Beans were also domesticated independently in the Andes.

While maize was the most important plant in ancient Mexico, squash appears to have been domesticated earlier than maize. The earliest evidence of domesticated squash (Cucurbit pepo) dates to about 8000 BCE. This evidence comes for Guilá Naquitz cave in Oaxaca. This early squash is a distant relative of today’s pumpkin. There are three major species of squash in Mexico: pumpkin, warty or crookneck squash, and walnut squash. Michael Coe and Rex Koontz write: “The origins of all of thee from wild ancestors or through hybridization are very little understood, although a very early domesticate has been identified, and the sequence of their appearance in Mexico is now established.”

Between 10,000 and 8,000 years ago, domesticated squash diffused north into Northern Mexico and the Southwest.