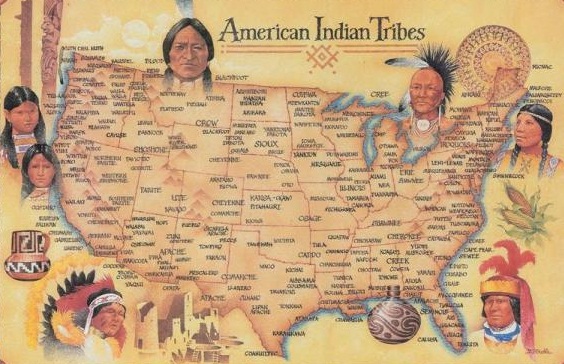 The name Huron was given to them by the French and means “rough, boorish.” They call themselves Wendat, Guyandot, or Wyandot which means “islanders.” Their traditional territory was north of the Lake Simcoe region of Ontario. Their homeland is often referred to as Huronia in many of the historical accounts.

Like the other Iroquian-speaking Indian nations, the Huron were farmers with a slash-and-burn agriculture which was supplemented by some hunting and fishing and by the gathering of certain wild plants for both food and fiber. Corn, beans, and squash provided about two-thirds of the Iroquois caloric intake. By 1630 it is estimated that the Huron, with a population of about 21,000, were harvesting 189,000 bushels of corn from 7,000 acres.

The basic foundation of Huron society, like that of other Iroquois nations, was the clan system. Iroquois society is divided into matrilineal clans which are named after certain animals. Among the Huron there were eight matrilineal clans: Turtle, Wolf, Bear, Beaver, Deer, Hawk, Porcupine, and Snake. The clans were exogamous, meaning the people had to marry outside of their own clan. Children belonged to their mother’s clans.

The Huron were a confederacy of four major tribes: Bear, Rock, Barking Dogs, and White Thorns (also known as Canoes). The people called their confederacy Wendat or People of the Peninsula. The major reason for the formation of the Huron confederacy was protection against common enemies. They were given the name Huron by the French.

There were three levels of government among the Huron: village, tribe, and confederacy. At the village level, clan chiefs organized councils in which older men and women expressed their opinions on matters concerning the village.

Each Huron village council met frequently, often daily, to discuss village affairs. According to anthropologist Bruce Trigger in his book The Huron: Farmers of the North:  “Often there was little business to transact, and the meeting took on the characteristics of an old boys’ club.”

Religion professor Henry Bowden, in his book American Indians and Christian Missions: Studies in Cultural Conflict, reports:  “The council was not so much a governing body as a sounding board for canvassing attitudes and pointing out the popular choice on specific matters.”  Discussions would be continued until consensus was evident.

Among the Huron there were two kinds of chiefs: (1) civil chiefs who were concerned with everyday life and peace, and (2) war chiefs who were concerned exclusively with military matters. Being a Huron chief required both time and an expenditure of wealth. Anthropologist Elisabeth Tooker, in her book An Ethnography of the Huron Indians, 1615-1649, writes:  “Chieftainships, then, were partly elected and partly inherited: a chief was elected from among the relatives of the deceased chief.”

The person who was elected was usually not the child of the deceased chief, but was more often a nephew or a grandson.

In her book Chain Her by One Foot: The Subjugation of Native Women in Seventeenth-Century New France, Karen Anderson reports:  “It would appear that Huron clan leaders had little ability to control the behavior of either women or men who chose to disobey or to not follow the decisions that had been taken in council.”

The Huron recognized four main classes of crime: (1) murder and wounding and injury, (2) theft, (3) witchcraft, and (4) treason. Murder placed an obligation on the relatives to avenge the killing. Reparation payments helped alleviate the possibility of blood feuds. Anthropologist Bruce Trigger notes:  “Huron law did not permit society as a whole to punish individuals.”

Among the Huron, material gifts were often used as a way of restoring peace and mending the social fabric following a crime, such as murder or physical injury. The guilty party (including both the individual and the clan) would pay the victim’s family. According to Henry Bowden:  “Thirty presents was the usual indemnity for killing a man, but the murder of a tribeswoman called for forty gifts.”

In 1649, the Iroquois, well-armed with guns supplied by Dutch traders, attacked and destroyed the Huron. Historian Ian Steele, in his book Warpaths: Invasions of North America, writes:  “Archeologically and anthropologically, the Huron can be regarded as exterminated in 1649 because their sites were abandoned and their culture structures destroyed. Historically, however, many of these people survived the calamity.”

The Sioux in Canada