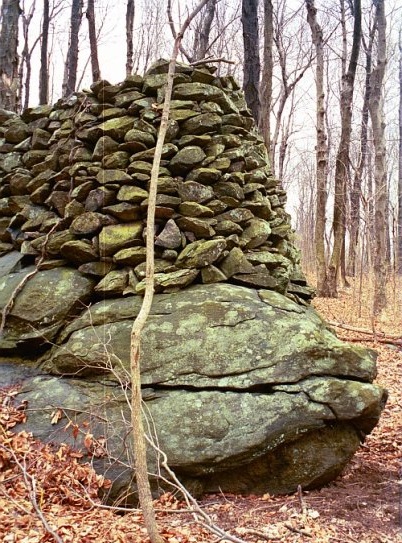 Twelve tribal representatives have been trained to identify and document ceremonial stone features as a part of an emergency avoidance plan for proposed gas pipeline projects in the Northeast. Reprinted below is the news release regarding this project.

Charlestown, RI, September 24, 2015: Under the auspices of the Tribal Historic Preservation Offices (THPOs) of the Narragansett, Mohegan, Mashantucket Pequot and Wampanoag Tribe of Gay Head (Aquinnah), individuals from the four sponsoring Tribes as well as members of the Mohawk, Shinnecock, and Passamaquoddy Tribes completed a week-long training in ceremonial stone landscape (CSL) identification at the Narragansett Indian Longhouse in Charlestown, RI, and were certified by the THPOs as CSL Field Specialists. The training was conducted on an emergency basis in response to proposed gas line development projects in the Northeast.

In December of 2008, the National Register of Historic Places acknowledged ceremonial stone landscapes as culturally significant to federally recognized Tribes in the Northeast, pursuant to the tenants of the National Historic Preservation Act (NHPA), which states: “The agency official shall ensure that consultation in the section 106 process provides the Indian Tribe . . . a reasonable opportunity to identify its concerns about historic properties, advise on the identification and evaluation of historic properties, including those of traditional religious and cultural importance, articulate its views on the undertaking’s effects on such properties, and participate in the resolution of adverse effects.” – National Historic Preservation Act, 36 CFR 800.2(c)(2)(ii)(A)

By law, Section 106 of the NHPA mandates that before construction, religious and cultural properties of traditional religious and cultural importance to federally recognized Tribes that attach cultural and historical significance to the project areas should be identified and documented in consultation with the affected Tribes. The Tribes, the federal agency, and the project proponents, then work together to devise a plan to avoid, minimize, or mitigate the impacts to the resources. This work must begin as soon as feasible in order for project proponents to receive the necessary permitting for construction from the lead federal agency (in this case, the Federal Energy Regulatory Commission – FERC). The work cannot proceed without additional trained Tribal representation, thus training Tribal representatives was urgent.

The training at the Narragansett Longhouse was authorized by Narragansett Medicine Man/THPO John Brown, and occurred under the guidance of the THPOs and their landscape mapping partner Ceremonial Landscapes Research LLC (CLR), an entity created in collaboration with the Tribes to assist in mapping and documenting CSLs using traditional Tribal knowledge. The Tribal representatives will work with a mapping team from CLR.

According to Doug Harris, Deputy THPO of the Narragansett Indian Tribal Historic Preservation Office (NITHPO): “Through this training, the Tribal Historic Preservation Offices (THPOs) hope to increase private landowner, federal agency, and project proponent awareness and stewardship of ceremonial stone landscapes that are sacred to our people, and to protect these places from unknowing destruction by development.”

Federal agencies such as the Army Corps of Engineers, the FCC, the FAA, the National Forest Service and the Army at Fort Drum, NY have acknowledged the significance of ceremonial stone landscapes, and have encouraged their protection. One hoped-for outcome of this project is to extend that acknowledgement and spirit of stewardship to all regulatory agencies and commissions. These ceremonial places have been identified in territories of past Tribal use from the Atlantic to the Pacific, and with the cooperation of local towns and landholders they should be protected wherever they are.

Tribal Contacts for this Release: