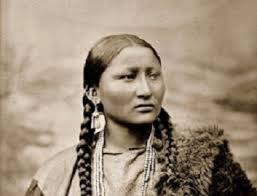 The popular media and sometimes history book view of the Northern Plains Indians of the nineteenth century envisions a male warrior, mounted on a horse, wearing a long war bonnet. There are many things wrong with this stereotype, but what is usually missing from the non-Indian descriptions of Northern Plains Indian warfare is the fact that women were often warriors.

During the nineteenth century, most of the non-Indians who observed Indian war parties were blind to the women warriors who rode with them. They simply assumed that any women in the group were there simply to cook and provide sex. The idea that a woman could be a warrior was totally alien to them. They failed to understand that women sometimes rode into battle with their husbands.

The American attitude regarding women, including Indian women, can be seen in 1877 when an American delegation went to Saskatchewan, Canada, to meet with Sioux refugees under the leadership of Sitting Bull. When The One that Speaks Once, the wife of Bear that Scatters, addressed the council, the Americans were insulted and offended by allowing a woman to speak to them in council. As had happened in other councils where women spoke, the Americans left the council and refused to participate with them.

Listed below are a few examples of well-known nineteenth century women warriors on the Northern Plains.

While Fallen Leaf (often called Woman Chief by the Americans) was a Crow warrior, she was actually born to the Gros Ventre nation and was captured by the Crow when she was 12. As a girl, her Crow foster parents allowed her to use the bow and arrow and to guard the horses. Later she learned to shoot a rifle and went on hunts with the men. With regard to her buffalo hunting prowess, Edwin Thompson Denig, writing in 1856 in his Of the Crow Nation, says Fallen Leaf

“could kill four or five buffalo at a race, cut up the animals without assistance, and bring the meat and hides home.”

She counted coup the first time when the Blackfoot attacked her camp. She mounted her horse and rode out to meet them. She shot down one Blackfoot warrior with her gun and shot arrows into two more. Denig writes:

A year later, she led her first war party against the Blackfoot, capturing 70 horses, killing two men including a chief, and taking the gun from a Blackfoot warrior.

After she had counted coup four times in the prescribed Crow tradition, she was considered a chief and sat in the council of chiefs. In addition to being a war leader, she was also a good hunter and had four wives.

Running Eagle became a Blackfoot (Piegan) warrior after her husband was killed by the Crow. To avenge her husband’s death, she sought help from the Sun and was told

“I will give you great power in war, but if you have intercourse with another man, you will be killed.”

After this she became a very respected war leader and led many successful raids on the large Flathead horse herds west of the Rocky Mountains. It was on a raid in Flathead country when she was killed. She had had sexual relations with one of the men in her war party and for this reason lost her war power.

Tashenamani (also calledMoving Robe; She Walks With Her Shawl) was a Hunkpapa Lakota woman who, along with thousands of other Sioux and Lakota, was camped at the Greasy Grass (also known as the Little Big Horn) in July of 1876. When Lt. Col. Custer’s Seventh Cavalry attacked the camp, Tashenamani seized her brother’s war staff and led the counterattack against the attacking cavalry. The warrior Rain-in-the-Face, recalling this attack, said:

“Always when there is a woman in the charge, it causes the warriors to vie with one another in displaying their valor.”

She rode into battle with her face painted crimson as a woman in mourning to avenge the death of her brother One Hawk who had been killed at the beginning of the attack. During the battle she killed at least one soldier: a black interpreter. When he asked her not to kill him, she replied:

“If you did not want to be killed, why did you not stay home where you belong and not come to attack us?”

Tasheamani was the daughter of Crawler and her fight at the Greasy Grass was not her first battle. Several years earlier, when she was 17 years old, she had been a part of a war party against the Crow.

At the battle of the Rosebud in 1876, American soldiers and their Crow and Shoshone allies attacked a Sioux and Cheyenne camp. The Shoshone and Crow shot the horse of Cheyenne Chief Comes in Sight out from under him. As they were closing in to finish him off, Buffalo Calf Robe (aka Calf Trail Woman), the sister of Comes in Sight, rode into the middle of the warriors and saved the life of her brother. Buffalo Calf Robe had ridden into battle that day next to her husband Black Coyote. The Cheyenne remember this as the most important war honor of the day.

As a Cheyenne warrior, Ehyophsta (Yellow-head Woman) played a prominent part in an 1868 battle with the Shoshone in which she counted coup on one Shoshone warrior and killed another.

A Very Short Overview of the O’odham Indians