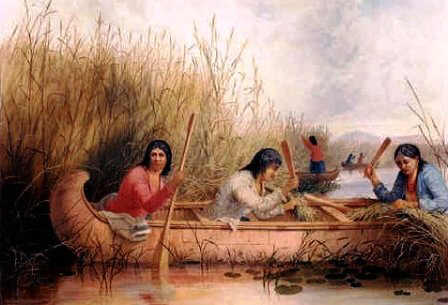 With regard to Great Basin ecology, Christopher Chase-Dunn and Helly Mann, in their book The Wintu and Their Neighbors: A Very Small World-System in Northern California, report:

“It is an ecologically sparse environment punctuated by small areas where water, game, and plant life are abundant.”

In her book Indians of the Plateau and Great Basin, Victoria Sherrow reports:

“Summers in a Basin desert can be fiercely hot, the winters bitterly cold. The land is unfavorable for farming and contains little game for food.”

This is an area which seems inhospitable to human habitation, yet Indian people have lived here for thousands of years. This was the last part of the United States to be explored and settled by the European-Americans. In writing about the early Indian settlement of the Great Basin, archaeologist Jesse Jennings, in his book Prehistory of Utah and the Eastern Great Basin, notes:

Linguistically all of the Indian people of the Great Basin, with the exception of the Washo, spoke languages which belong to the Numic division of the Uto-Aztecan language family. The Numic languages appear to have divided into three sub-branches—Western, Central, and Southern—about 2,000 years ago. About a thousand years ago, the Numic-speaking people expanded northward and eastward.

The Ute were never a single unified tribe. There are several bands of the Ute:

(1) the Weminuche (Weeminuche) or Ute Mountain Ute whose homeland is the San Juan drainage of the Colorado River,

(2) the Tabeguache (also known as Uncompahgre),

(4) the Yampa whose homeland is in northwestern Colorado,

(5) the Uintah whose homeland ran from Utah Lake east through the Uinta Basin,

(6) the Muache (Moache) whose homeland ranged south along the Sangre de Cristos as far south as Taos,

(7) the Capote of the San Luis Valley and the upper Rio Grande,

(8) the Sheberetch in the area of present-day Moab,

(9) the Sanpits (San Pitch) in the Sanpete Valley in central Utah,

(10) the Timanogots near Utah Lake,

(11) Pahvant who lived in the deserts surrounding Sevier Lake, and

“The hand motion made for the sign represents a snake to most signers, but among the Shoshoni it referred to the salmon, an unknown fish on the Great Plains.”

The Shoshone often refer to themselves as newe.

The Bannock, who call themselves Bana’kwut (“Water People”), were called Buffalo Eaters and Honey Eaters by other tribes.

At one time, the Bannock lived in the desert areas of southeastern Oregon. They later migrated into the Snake and Lemhi River valleys where they came in contact with the Shoshone. The two groups shared many cultural elements and their languages are related. In his book The Shoshone-Bannocks: Culture and Commerce at Fort Hall, 1870-1940, Historian John Heaton writes:

“Shoshones spoke Central Numic, whereas Bannocks, who began to intermarry with Shoshones in Idaho in the early eighteenth century, spoke Western Numic.”

With intermarriage, many became bilingual. Today the term Sho-Ban is used to refer to the two tribes.

Bannock culture tended to emphasize war more than Shoshone culture. With regard to the merger of the Shoshone and Bannock, historian John Heaton writes:

“Bannock warriors generally emerged as the most influential leaders of the equestrian Shoshone-Bannock bands.”

The traditional homeland of the Gosiute was south and west of Great Salt Lake. They lived in the Tooele, Rush, and Skull valleys. In his book Basin-Plateau Aboriginal Sociopolitical Groups, Julian Steward feels that the Gosiute are linguistically and culturally Shoshone.

In the northern part of the Great Basin, the bands tended to call themselves after a particular food source: “salmon eaters,” “mountain sheep eaters,” and so on. In the south, the band names tended to be geographical.

The linguistic and archaeological data seem to suggest that the Numic-speaking people spread into the Great Basin from southeastern California.

The homeland of the Numic-speaking groups in the Great Basin is generally seen as the Death Valley area. Linguistic data seems to suggest that these groups began their migrations from this area into other parts of the Great Basin about 1,000 to 1,500 years ago. In an article in the Utah Historical Quarterly, Catherine and Don Fowler report:

“Archaeological and linguistic evidence indicates that the Numic-speaking peoples spread across the Great Basin sometime after A.D. 1000, displacing or replacing the earlier carriers of the Fremont and Virgin Branch Anasazi cultures in Utah, eastern Nevada, and Northern Arizona.”

In an article in American Antiquity, Angus Quinlan and Alanah Woody report:

“Indications of a late Numic spread into the western Basin can be found in some Numic oral traditions, though other oral histories insist that Numic groups have occupied the Great Basin from the beginning of time.”

Children Among the Indian Nations of the Great Basin