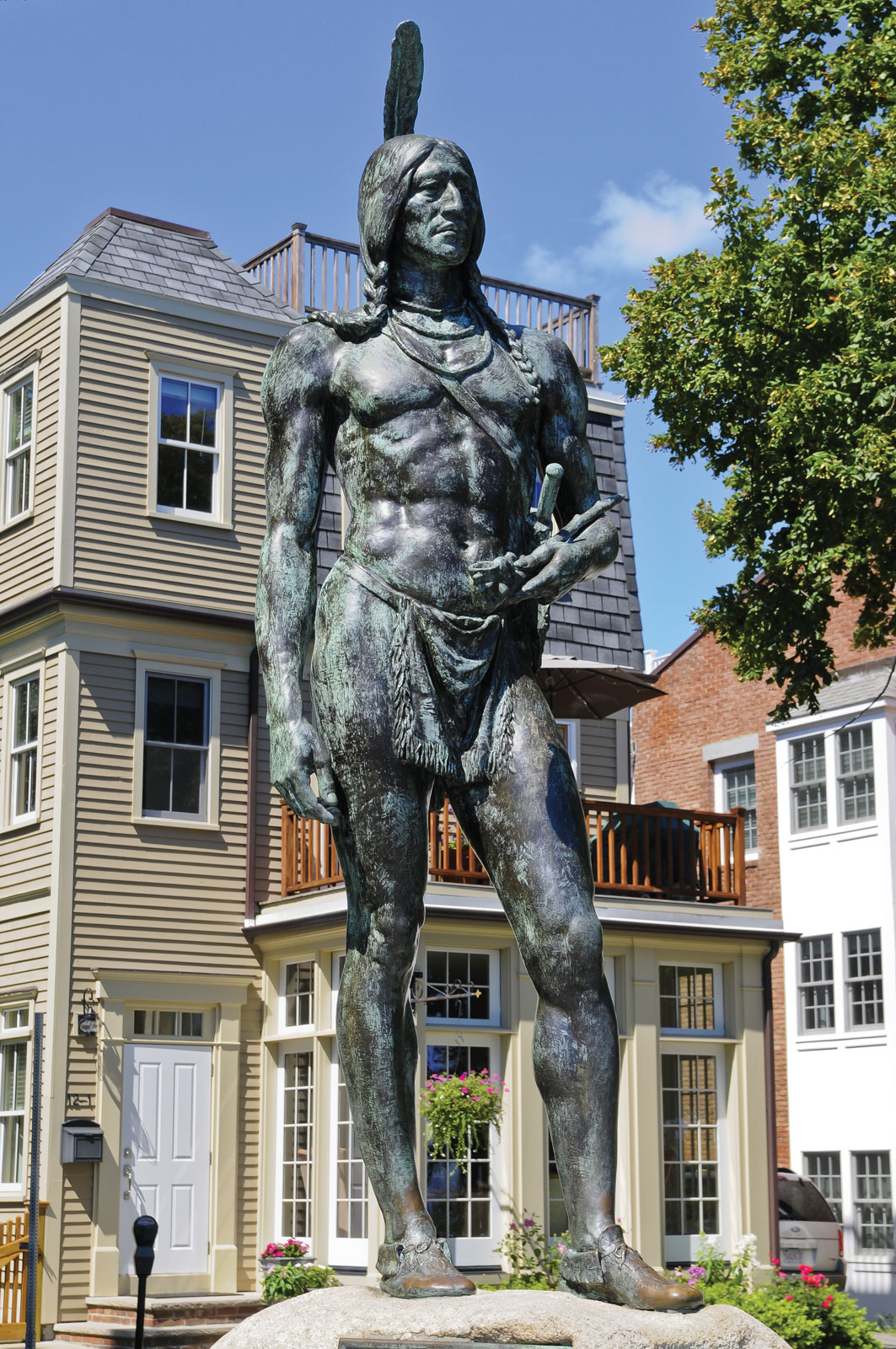 The Wampanoag were hit hard by the epidemics which swept through New England in 1616-1619. Prior to the epidemics it is estimated that there were 24,000 people living in Indian communities affiliated with the Wampanoag confederacy led by Massasoit. As a result of the epidemics, 75% of the population died.

With the arrival of the Pilgrims in 1621, Massasoit saw an opportunity to increase the power of the Wampanoag confederacy. By signing a treaty of mutual support and protection with the Pilgrims, Massasoit insured that there would be peaceful relations with these people, but more importantly, this alliance would give the Wampanoag better access to European trade goods. With these goods, particularly firearms, the Wampanoag were able to increase their power among the tribes in the region. Historian John Humins, in an article in New England Quarterly, writes:

“This treaty was a bold move by the Wampanoag sagamore, who, as a result, bolstered his economic, military, and political control. He may well have assumed that the pact made the newcomers members of his confederation.”

Writer Frank Waters, in his book Brave are My People: Indian Heroes Not Forgotten, describes Massasoit:

“He wore a deerskin robe and a great chain of white beads to which were fastened a long knife and a leather tobacco pouch.”

In 1621, Massasoit had two of this people—Hobomok and Squanto—teach the Pilgrims agricultural techniques. Without these lessons and without the food supplied to them by the Indians, it is doubtful that the little colony would have survived. That fall, following the harvest, Massasoit brought 60-100 Wampanoag to Plymouth for a traditional harvest feast and with this action set the pattern for a holiday which Americans would later call Thanksgiving. The Wampanoag brought with them five deer to provide venison for the feast, as well as turkey, geese, ducks, eels, shellfish, cornbread, succotash, squash, berries, wild plums, and maple sugar.

In 1621 there was a rumor that Massasoit had been captured by the Pocasset sachem Corbitant. Squanto, Hobamok, and Tokamahomon, who were living with the Pilgrims, went to Corbitant’s village where they found that the rumor was not true, but Corbitant took them captive. Hobamok managed to escape and told the English who then attacked the village, wounding several Indians and freeing Squanto and Tokamahomon. Massasoit then negotiated a peace between the English and the Pocasset.

In 1622, the Narragansett sent a bundle of arrows tied with a snake skin to the Pilgrims at Plymouth. The Pilgrims interpreted this message as a challenge and returned the skin with bullets in it. Historian John Humins reports:

“By doing so, the Pilgrims committed a major diplomatic blunder: they ignored Hobamok’s urgings to confer with Massasoit before responding.”

In 1623, Massasoit became sick and was treated by English physicians. At this time, he warned the Pilgrims that some of the tribes—Narragansett, Massachuset, and some Wampanoag—were plotting against the settlers. Massasoit’s war chief, Annawan, led a series of raids against the insurgent groups.

Over the years, however, Massasoit found that his alliance with English was not beneficial to his people. With the great English hunger for land, more and more Wampanoag land was taken from them. When the Indians complained, they were punished by the English courts who viewed them as trespassers on their own homelands.

Massasoit died in 1661 and the peace which he had helped forge with the Europeans began to crumble. His son Alexander (Wamsutta) became the Grand Sachem briefly. Then his other son Philip (Metacom) became Grand Sachem and led the Wampanoag into the uprising against the English known as King Philip’s War.